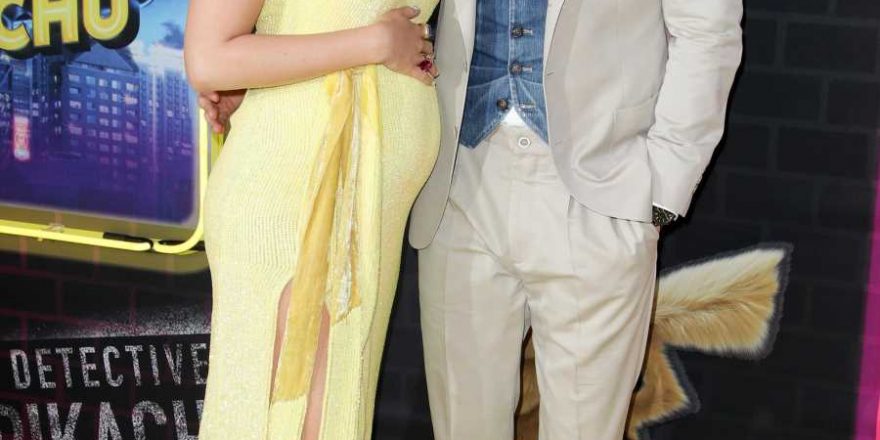 Blake Lively is embracing her third pregnancy, as well as her husband Ryan Reynolds’ starring role in Pokémon Detective Pikachu.

Posting a series of photos from the New York City premiere of the film, where the 31-year-old actress announced her pregnancy by stepping out wearing a yellow dress that hugged her belly, Lively put her sense of humor on display on Saturday as she shared one of her new nicknames.

“PokeMOM… Out now,” Lively wrote, presumably referring to both the film itself, which hit theaters on Friday, as well as the fact that her pregnancy is no longer being kept under wraps.

Alongside the silly caption, Lively shared a carousel of images from the night out, highlighting her sunny yellow dress, as well as all of her glitzy accessories.

In a photo shared on her Instagram Stories, Lively brought her fans’ attention to the rainbow-colored Judith Leiber clutch shaped like a Poké Ball that she carried on the red carpet, as well as a variety of jewelry from Lorraine Schwartz and her festive Pokémon-themed nails.

Praising the designers she wrote, “you turned it out,” before lamenting that she didn’t actually get to keep the items.

“I hate you for making me give this all back an hour later,” she jokingly quipped.

Ahead of the Tokyo premiere of the film, director Rob Letterman also revealed that while Reynolds was always his first choice to voice Pikachu, the actor had to be talked into accepting the role.

“We were all in on Ryan,” Letterman shared during an interview with Collider. “What happened was I did these tests. I took an old clip of Ryan’s from a different movie and we animated Pikachu to it. And the second I saw that test, it was done. I mean, it was perfect.”

However, there was just one small problem, at the time, Reynolds didn’t even know about the film!

“We hadn’t even reached out to him,” the director shared.

Letterman went on to share that ultimately he owed one of Reynolds’ daughters a big “thank you” for convincing their dad to do the movie.

“I found out the other day, he finally confessed, he showed that clip to his daughter, and she’s the one who talked him into it,” he remarked. “So thank you, Ryan’s daughter.”

A source close to the couple told PEOPLE the third-time parents-to-be are “so happy and excited about having another baby.”

“They really are the most in-love and in-tune couple and very hands-on parents. They’d have a dozen kids if they could,” added the source.

And although Reynolds is currently outnumbered, that doesn’t mean he’s necessarily hoping for a boy this time around.

“Having a daughter was a dream come true for me. If I could have nine daughters, I would be thrilled. Really, like I genuinely would be,” the actor told PEOPLE in 2016.