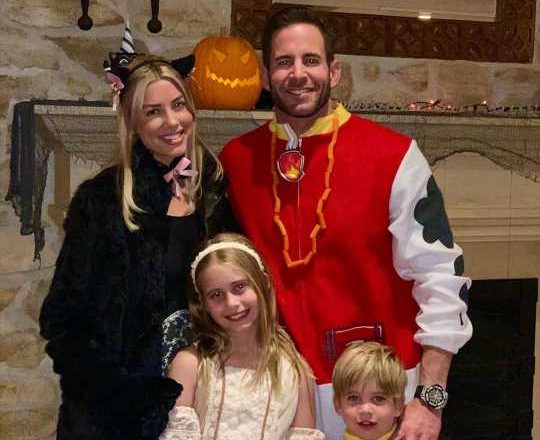 The Flip or Flop stars brought the whole gang together on Halloween to go trick-or-treating with their two children — Taylor Reese, 9, and Brayden James, 4 — as well as Anstead’s new husband Ant, her parents, and El Moussa’s girlfriend Heather Rae Young.

“It was a lot of fun — we took the kids out and it was the first time we all got together,” El Moussa, 38, tells PEOPLE exclusively. “I was Marshall from Paw Patrol and then Brayden matched me. So, we were out there cruising together as twins.”

Young, 32, who stars in the Netflix real estate reality series Selling Sunset, dressed up as a cat and Taylor was a “boho fairy,” says El Moussa. “It was super cute.” (The four of them are pictured together above.)

Brayden also dressed up as Woody from Toy Story for a snap posted to Christina’s Instagram the week prior.

The last time the former couple came together was for Taylor’s 9th birthday in September, when El Moussa also brought Young along for the party.

El Moussa and Christina, 36, filed for divorce in 2017 and finalized their split in January 2018. Christina wed Ant, 40, in December of that year at a surprise ceremony at their home in Newport Beach, California.

She gave birth to their first child together, son Hudson London, on September 6, 2019.

Ant also has two children from his previous marriage, 13-year-old son Archie and 16-year-old daughter Amelie Rose, who have become a part of the couple’s “blended” family, Christina has said.

El Moussa started seeing Young around the Fourth of July this year, after meeting through mutual friends. They were spotted kissing and cuddling later that month and made their relationship Instagram official in August.

“Everything is amazing. I just adore that girl,” El Moussa told PEOPLE of Young. “She’s my sunshine, she’s just so special to me, and I just love her to death. She’s just wonderful.

This month, El Moussa is teaming up with Movember to spread awareness regarding men’s health and cancer. Though the real estate pro, who has a new show, Flipping 101 with Tarek, set to debut on HGTV next year, can’t grow a mustache himself because he needs to “keep the look consistent” for filming, he is on board with the Movember foundation.

“The more people know they need to check themselves, the better it is,” El Moussa, who has beat cancer twice, said. “I’m just trying to help out and spread the message that cancer is a serious thing and it’s fightable, and if you catch it early, your odds of survival are much greater.”

He and Christina haven’t yet decided if they’ll bring everyone back together again for the upcoming holiday season, El Moussa says.

On top of continuing to film Flip or Flop with Christina and shooting his new solo show for HGTV, El Moussa is expanding his YouTube channel and recording a podcast, Life by Design.