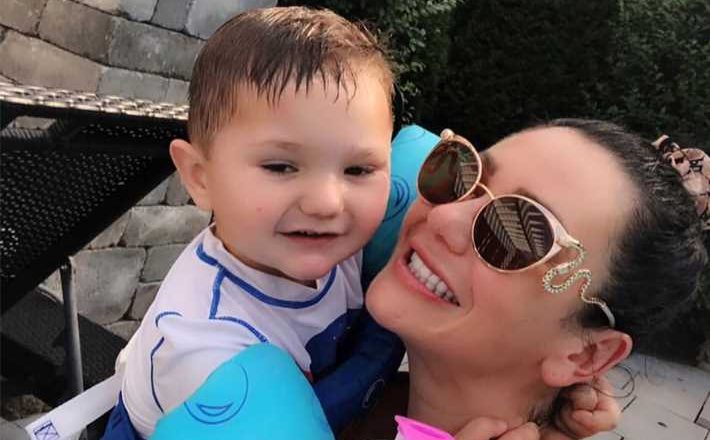 Greyson Valor turned three today, and his mom couldn’t be prouder of her birthday boy!

Jenni “JWoww” Farley shared a heartwarming birthday post on her Instagram Sunday to celebrate her son’s birthday and update fans on his speech progress. Along with a photo of Greyson at the hospital shortly after being born, the Jersey Shore star told her followers that Greyson has made strides with his developmental speech delay after months of therapy and now knows “countless words.”

“When you were first born, you needed to stay in the hospital a few extra days… I got to stay with you and spend Mother’s Day by your side,” Farley began. “The perfect son from day one, so delicate and sweet. I can’t even picture life before you because you and your sister complete me.”

“You slept on my chest until you were a year old because it was the only way I could calm your chronic cough… yet, I needed that more than you needed me because hearing your breath every night calmed me,” the mother of two said. “Now I wake up with your arm across my face or your butt on my head. I wouldn’t have it any other way.”

Want all the latest pregnancy and birth announcements, plus celebrity mom blogs? Click here to get those and more in the PEOPLE Babies newsletter.

Speaking about Greyson’s speech therapy, Farley reflected on her son’s determination and growth.

“Today you turn 3. This past year flew by so fast. I had you start early intervention 2 days after your second birthday,” she said. “You didn’t know your name, you didn’t know how to say mommy… as you turn three, you know countless words, call me mommy 10394 times a day and your smile has grown 10x.”

Farley concluded, “To my perfect son, happy birthday… I’ll continue to hold you every night until my last breath.”

The MTV reality star first opened up about their son’s developmental struggles last August, explaining to fans that her son wasn’t speaking and began attending therapy three times a week.

Since then, Farley has shared adorable videos of her son’s progress with his speech. However, when speaking about her personal experience as a parent trying to help her son, she previously has opened up about how she felt alone in her efforts.

“When Greyson wasn’t hitting his marks in the world of doctors … not that he couldn’t care less, but [Roger] was like, ‘He’s perfect. He’s going to be fine. This is no big deal,’ ” she said in an October 2018 Today show interview of her now-estranged husband.

“In that aspect, I felt very alone because I was the only parent,” she continued. “I thought, ‘Am I bad wanting to get him help because Roger’s not concerned, so should I not be concerned?’ ” she said.

Farley filed for divorce from Mathews in September after almost three years of marriage.