Home » Family Health » 'Our Miracle': Celebrities Who Welcomed Babies After Experiencing a Miscarriage 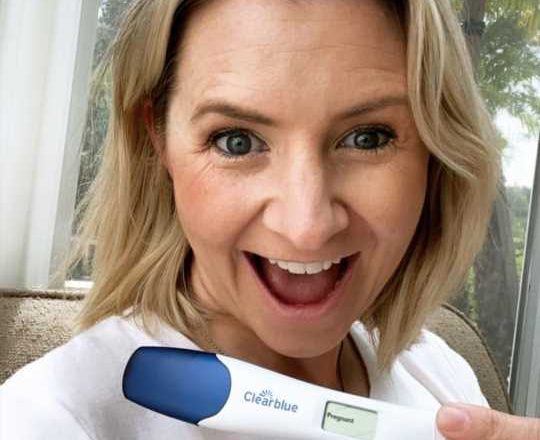 'Our Miracle': Celebrities Who Welcomed Babies After Experiencing a Miscarriage

The 7th Heaven actress — mom to Hutton and Kenzie — announced on March 17, 2020, that she is expecting with husband Michael Cameron, posting a smiling photo of herself as she held up the positive pregnancy test.

“We finally got our gold at the end of the rainbow!!!!” she captioned the post. “We are pregnant with our rainbow baby! So happy to partner with @clearblue to announce that we are in fact PREGNANT! The road hasn’t always been easy but it is so worth it! It is has been far but scarier this time around but just got a great checkup so we are feeling lucky!”

The news comes after the actress previously suffered a miscarriage with twins in 2018.

Mitchell wrote in an emotional blog post at the time, “I was now part of a group, the unspoken and hidden group who mourn their losses in the shadows. This was the hardest part, suffering in silence. Every time I shared what we were going through I made people uncomfortable, no one ever knows what to say, and to be honest, there is nothing to say.”

She pointed out, “Most people who are sharing their story, we aren’t looking for anything, just the opportunity to share their story. It is with sharing it that the healing begins, the acceptance that it happened. It is when you ignore it or pretend that it never happened that you cause more pain. Dismissing it almost makes it worse.”

The co-host of ABC’s The View announced in March 2020 that she and conservative writer husband Ben Domenech were “blessed to find out” she’s expecting a child.

News of her pregnancy came about eight months after McCain wrote an op-ed for The New York Times in which she revealed she suffered a miscarriage. “For a brief moment, I had the privilege of seeing myself in the sisterhood of motherhood,” she wrote about her baby girl. “I had a miscarriage. I loved my baby, and I always will. To the end of my days I will remember this child — and whatever children come will not obscure that.”

McCain, who wed Domenech in November 2017, wrote then, “I have love for my child. I have love for all the women who, like me, were briefly in the sisterhood of motherhood, hoping, praying and nursing joy within us, until the day the joy was over.”

Dreyer’s pregnancy announcement (and big reveal that the couple was expecting Oliver) came in July 2019, on the heels of sharing in April 2019 that she had suffered a miscarriage during the winter. The loss followed a struggle with trying to conceive for six months, after which the couple were referred to a specialist. There was no need for IVF, however: Dreyer ended up conceiving naturally.

“I was just waiting for the phone call from Dr. Reichman, to tell me how much of each drug to use,” Dreyer recalled to PEOPLE at the time of her planned ovarian-stimulation cycle. “Instead, when he called, he said, ‘Well, you can’t start IVF because you’re already pregnant!’ We were in complete shock. We couldn’t believe it!”

The actress announced in August 2019 that she was expecting with husband  Paul W.S. Anderson after experiencing a miscarriage.

She wrote on Instagram at the time, “After I found out I was pregnant 13 weeks ago, I had a mixture of feelings ranging between complete joy and utter terror. Because of my age and losing the last pregnancy I didn’t want to get attached to this potential baby too quickly.”

“That was obviously not fun and the last few months have been my family and I living on pins and needles waiting for a slew of different test results to come in and spending most of our time in doctors offices.”

Jovovich gave birth to a baby girl, Osian, in February 2020. Jovovich wrote of Osian on Instagram, “She’s our miracle baby and we’re all so grateful to have her and completely obsessed with her!!”

“I’m so excited,” the “Dammit” singer told PEOPLE about her happy pregnancy news. “We lost in October and then we did an IVF cycle and we lost in February, so I want to be able to be like, ‘Hey, I know it’s hard but just try to have some hope.’ ”

When Kramer miscarried in December 2017, she wrote on Instagram, “For the women out there who have miscarried in the past and need support and a place to grieve their little one lost or to those in the thick of it like me who are currently grieving and in pain, let us all be there for each other. You don’t need to feel alone and maybe that’s me talking to myself but if you need a place to share, I’m here for you … and all of us are (and guys too — we sometimes silence your voice because you feel bad to express how it’s made u feel so let this be a safe place for you too).”

Eva Amurri gave birth to a healthy baby boy, Major James, in October 2016 after experiencing a miscarriage in August 2015 at nine weeks.

Amurri wrote on her blog at the time that she was shocked at how common pregnancy loss is, given that it is not often discussed. “Of course the fact that it is common doesn’t do anything to help the pain,” Amurri wrote. “But what was so shocking to me is how common miscarriages are, versus how little I hear them talked about.  I’m not sure if this is because people are ashamed to suffer this loss, or whether the loss is simply too painful to share (I can see how this could be the case also).”

She added, “To anybody enduring similar heartache, I will tell you what I’m feeling and processing as a result of this loss: A lot of confusion, some anger, deep sadness, and also an immense amount of gratitude. I have realized in the past forty-eight hours how incredibly grateful I am for the magic that I have in my life.”

The joyous news came after the couple shared their emotional and heartbreaking miscarriage with the world in 2017. Kristen wrote in her blog that she learned there were complications with her pregnancy at an ultrasound at nine weeks.

“God took our baby. Twenty short days after our first ultrasound,” Kristen wrote on her blog in 2017. “The greatest lesson in all of this is about empowering yourself to recover. That you need to heal.”

She added that it is important for women who have suffered miscarriages to remember they are not alone, writing, “Remember this, this one in three walks with you. I am one in three. I have lost. I am one.”

The Married at First Sight star has been very open about fertility struggles. Otis lost her first pregnancy at 17 weeks in 2016 and experienced a miscarriage at 10 weeks in January 2019.

Otis and her husband, Doug Hehner, welcomed their daughter, Henley, on Aug. 22, 2017, and Otis is currently pregnant with a baby boy, due in May 2020.

“With this pregnancy, we’ve seen the fertility specialist from the very beginning and graduated to our OB. I’ve had zero bleeding/cramping with this pregnancy so I am confident it is a healthy baby — at least I try my best to stay confident,” she told PEOPLE.

“That being said, I’m honestly just so excited and enjoying the blessing of being able to make and carry a baby again! I’d be lying if I didn’t admit I am a little scared too. Of course the fears of loss always creep up, but I try to pray them away and only put out positive vibes into the universe.”

Lauren and her husband, Josiah Duggar, announced their second pregnancy in May 2019, posing with a sign that read, “Rainbow after the storm. Baby #2.”

The pair revealed that Lauren had suffered a miscarriage in October 2018 in a clip from Counting On.

“I wasn’t feeling well,” Lauren said through tears. “I was cramping really, really bad, which was quite strange because I normally don’t. I was thinking maybe I had something that had gluten in it. It was late at night and I went to use the restroom and there was the baby. Gone. I couldn’t believe it and I was hoping it wasn’t true.”

The pair welcomed their rainbow baby on Nov. 8, 2019, a daughter named Bella Milagro.

“After a long and difficult labor, our girl arrived,” the couple said. “When we finally got to see and hold our precious Bella Milagro all the pain instantly went away. We can’t believe she is ours — she is so perfect!”

In October 2017, the former gymnast and her husband, Andrew East, announced that she had miscarried just two days after learning she was expecting in an emotional YouTube video.

“The past 48 hours have been some of the happiest, scariest, and saddest times of my life,” Johnson East captioned the video. “My husband Andrew and I found out that we were unexpectedly pregnant, only to find out hours later some tragic news. I have been crying more than I ever have, but am still optimistic for what is next.”

Johnson East revealed that she “felt so sad and guilty that I had done something wrong to lose this child,” adding that she worried her past as a gymnast affected her ability to carry a child.

The couple welcomed daughter Drew Hazel into the world on Oct. 29, 2019. She shared that she was in labor for 22 hours before delivering her baby girl.

Nick Carter and his wife, Lauren, announced that they were expecting again eight months after they revealed Lauren had suffered a miscarriage in September 2018.

“God give us peace during this time. I really was looking forward to meeting her after 3 months. I’m heartbroken,” Carter tweeted, adding in a separate tweet, “It was a little sister for Odin.”

Lauren shared an ultrasound photo on March 8, 2019— “what would have been her due date” — in honor of International Women’s Day, praising her fellow women for being “badass.”

“If you are struggling to start a family or have had a loss this post is for you, you’re not alone and there is always hope,” she wrote. “Thankfully I have access to great Dr’s and healthcare professionals but sadly many women don’t so in honor of our baby girl and #internationalwomensday I am making a donation to @everymomcounts in hopes of aiding future parents from preventable illnesses and in some cases death.”

The pair welcomed their daughter, Saoirse Reign, in October 2019.