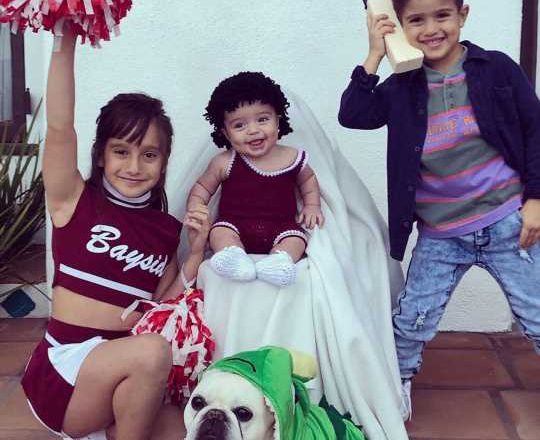 Thirty years after Saved by the Bell first made waves, one of its main cast members, Mario Lopez, is leveraging the help of his kids on Halloween to pay homage to the teen series that made him a household name.

But baby Santino Rafael, 3 months, may take the cake in his first-ever Halloween costume, modeled after his dad’s character A.C. Slater’s wrestling uniform from the show. And not to be left out, the family pup Julio even makes an appearance as Artie, Slater’s beloved chameleon and star of the season 4 episode “Slater’s Friend.”

“Saved By The Bell the reboot!” Lopez, 46, captioned the memorable post, while his wife Courtney hilariously wrote alongside a similar collection of images, “Who’s your daddy?!?!”

The group costume may come as a bit of a surprise, as Lopez previously revealed his two older children weren’t the biggest fans of the series when he showed it to them.

“My kids have given it a shot and [they’re] not feeling it,” he said in August 2018 during an appearance on The Ellen DeGeneres Show alongside one-time onscreen flame Thiessen, 45.

In fact, the Extra host’s children have asked him, ” ‘Daddy why is your hair like that?’ ” he joked.

Meanwhile, Thiessen’s daughter Harper Renn, 9, was all about it. “Harper was into it [because] she was so into [Lopez] and Mark-Paul [Gosselaar],” she said. “She’s so boy crazy already, I’m in trouble.”

Last month, Lopez confirmed that he would be returning as the beloved jock for the upcoming Saved by the Bell revival, which will air on NBCU’s upcoming streaming service, Peacock.

He will be joined by Elizabeth Berkley, who played Jessie Spano in the original series, for the reboot. They are the only cast members that have been confirmed thus far for the show, which will be headed by 30 Rock writer and Great News series creator Tracey Wigfield.

“The deal is being done,” Lopez told Access Hollywood. “It’s gonna happen. We are going to be rebooting Saved By The Bell for the new NBC streaming platform.”

The actor also teased the return of his late ’80s/early ’90s hairdo. “I might be bringing back the mullet,” he said.