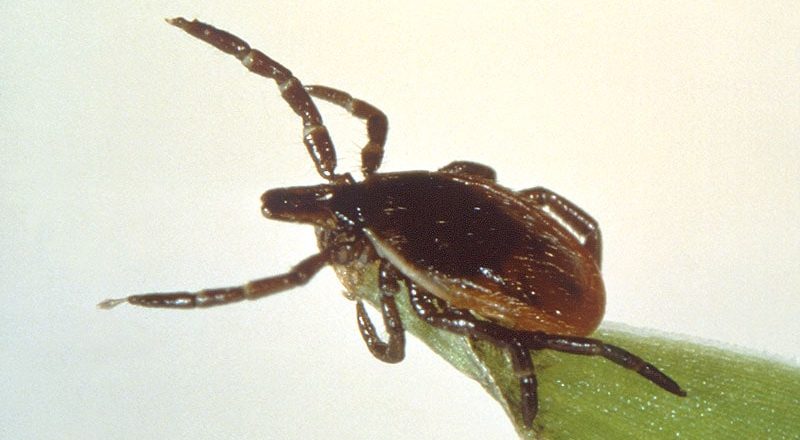 May 7, 2021 — Planning to hit the beach this summer? You might want to throw some bug spray into that beach bag along with your sunscreen.

For the first time, Lyme disease-carrying ticks — typically associated with woodlands in New England and other forested regions of the U.S. — have been found in abundance near beaches in Northern California, new research shows.

Daniel Salkeld, PhD, a Colorado State University research scientist who led the new study, said the findings surprised even his own team, which did not expect to discover ticks infected with Lyme disease-causing bacteria on the shoreline.

“We were a little astounded when we first found ticks in the coastal scrub — chaparral and grassland that abuts the coast — they were in abundance,” Salkeld said. “And if you’d asked at the time, I would have guessed that these ticks wouldn’t be infected with pathogens [that cause Lyme disease].

“But we did indeed find pathogens in these tick populations and that raises the question of what is the source?”

John Aucott, MD, director of the Johns Hopkins Lyme Disease Clinical Research Center, said the study is boosting new concerns about how and where Lyme disease can spread, with the prime summer beach season just weeks away.

“I was surprised by the findings,” said Aucott, an associate professor at Johns Hopkins University School of Medicine. “But I want to point out that that this was a California study. So I don’t want to extrapolate this necessarily to the East Coast. But I was a little surprised because on the West Coast we thought about Lyme more in the oak woodlands, and this really showed that when you looked, you found it in other places.”

And if that isn’t scary enough, Lyme disease forecasters are saying 2021 could be one for the record books.

This winter was one of the warmest on record, and lingering summer heat could add weeks of outdoor activity to animals that carry ticks, which thrive in hot, humid conditions.

Pests.org, which produces an annual 2021 Tick Forecast, projects the Southeastern United States won’t see more tick activity than usual this year, but adds: “Most states will experience the warmer, wetter conditions that drive tick populations — and the prospect of tick-borne diseases — skyward.”

What’s more, Aucott believes more Americans will book outdoor travel plans this summer after a year of being homebound because of the COVID-19 pandemic. Tens of millions will hit the road for beach vacations and other open-air destinations, with the loosening of travel restrictions, the rise in vaccinations, and new federal health guidelines easing mask-wearing recommendations for outdoor settings.

He noted researchers saw “a big uptick” in Lyme disease cases last summer for that same reason — “you know, people who’ve been stir crazy with COVID, wanting to get out of the house, and people taking to hiking and camping and all that.”

He added: “I’ve heard anecdotally that last summer was bad and I suspect this summer will be, too. People will have a chance to stretch their wings by getting outside. And it doesn’t have to be some big adventure, like hiking the Appalachian Trail; they just need to go to their regional park and take a hike and not take precautions.”

‘Ticks Are Always Surprising Us’

Salkeld said his research sought to provide an overview of Western black-legged tick populations in Northern California and whether they are infected with bacteria that cause Lyme disease and other illnesses.

They started by looking in typical places ticks are found — oak woodlands and redwood forests — then branched out to coastal areas.

The big surprise: Researchers found ticks almost everywhere they looked, Salkeld said. This was unexpected because Western gray squirrels, believed to be the region’s predominant source of infection for ticks, are not common in coastal areas. Now, Salkeld’s team is conducting additional studies to identify other tick carriers.

“We’ve found ticks infected with bacteria in woodland, redwood forest, coastal scrub … Now we’re really interested in understanding what animals might be the reservoir — the host that actually infects the ticks — for the disease in these other habitats,” he said. “I have uneducated guesses: Perhaps mice, wood rats, rabbits, voles.”

Salkeld’s study, funded by the Bay Area Lyme Foundation, did not find ticks on sandy beaches themselves, but in the brush, grasses, and vegetation that grow nearby.

“To be clear, we didn’t find ticks on the beach, but in the habitat on the edges of the coast,” he noted. “And colleagues and friends and members of the public have now let me know that this is probably also a concern in those coastal scrubby habitats in the eastern U.S. I’m not sure whether there are differences in the likelihood of disease being in those tick populations (compared to woodland habitats) though.”

The findings, published in the June issue of the peer-reviewed journal Applied and Environmental Microbiology, point to the need for greater awareness of the risks of tick-borne diseases among beachgoers, outdoor enthusiasts, and health care professionals, he said.

Aucott said the big takeaway is that disease-carrying ticks are in more places than once believed, not just wooded areas.

“On the East Coast, it’s pretty hard not to find an area that’s got Lyme disease, unless you live on the asphalt of inner-city Baltimore,” he noted. “Other than that, everywhere has Lyme disease. Even inner-city suburbs have woods and deer and ticks and mice. So you don’t have to be out in the county in the rural areas; even in inner suburbs that are wooded, we see lots of cases.”

Aucott added that many Americans are bitten by Lyme-disease carrying ticks in their own backyards.

“A lot of people get it when they’re gardening this time of year or when they start clearing brush at the fringes of their yards. That’s where the ticks are.”

For Kirsten Stein, the growing awareness of Lyme disease comes about a decade too late. Stein, 51, first became ill with the disease over Labor Day weekend in 2010. But it took 3 years — and more than a dozen doctors — before her condition was diagnosed.

In part, she said, that’s because she’s a resident of coastal Marin County, CA, where many doctors believed Lyme disease was rare or nonexistent.

“It felt like the worst flu of my life and I never had anything so horrible ever,” said Stein, a wife and mother of two teenagers. “I had spreading numbness, severe foot pain, bone pain, I’d get swelling in my hands and feet, shortness of breath, and the fatigue was beyond anything I’d ever experienced.”

She also had dizziness, speech problems, brain fog, daily nausea for years, and even Bell’s palsy. But none of the doctors she initially saw could explain her symptoms.

“It was terrifying. I was very active and fit, and I couldn’t get an answer to what was going wrong and why I was waking up with some new weird symptom for months at a time,” said Stein, an avid mountain biker and outdoor enthusiast. “I had three MRIs, I did countless blood tests, allergy tests, you name it. I went down every road I could.”

Eventually, her daughters’ pediatrician suggested she go for Lyme disease testing after she told him about her symptoms.

Two months later, she was told she had tested positive for Lyme disease and two other bacterial infections.

With antibiotics and supplements, Stein is now “OK,” but still gets flare-ups.

“It’s been a long journey,” she said.

Her experience prompted her to join the Bay Area Lyme Foundation board to help raise awareness, which she still believes is lacking.

“I’ve had several doctors tell me there’s no Lyme in California, that the ticks are not infected, and that this isn’t a problem,” she said. “But now more doctors and more people are knowledge about it. And I’d say, especially this time of year, I probably get a call at least 5 to 7 days a week from someone reaching out saying they’ve been bitten by a tick and asking what they should do, where do they go.

“And every new study that comes out is extremely helpful in getting the message out that it is a problem, it does exist, and you need to get educated about it. I never want anyone to ever go through what I went through. It is horrible.”

Salkeld said the big takeaway of his research is simple: The more we look, the more we find Lyme disease-infected ticks, so it’s important to keep that in mind if you’re engaging in virtually any outdoor activities.

With that in mind, here are some key facts about Lyme disease and precautions you can take — from Salkeld, Aucott, and the CDC:

Most humans are infected through the bites of immature ticks called nymphs, which are the size of poppyseeds, that attach to hard-to-see areas such as the groin, armpits, scalp, and the backs of knees. In most cases, the tick must be attached for at least 36 to 48 hours before the Lyme disease can be transmitted.

Although it’s unclear how many Americans get Lyme disease, a recent study cited by the CDC estimated as many as 476,000 Americans are diagnosed and treated for it annually. Cases have been reported in all 50 states.

Prevention: If you’re heading outdoors, particularly to wooded or grassy areas, wear long pants, socks, and shoes and use an Environmental Protection Agency-registered insect repellent. Aucott also advocates spraying your clothes and shoes with permethrin to repel ticks. If you’re headed to the beach, be sure to use insect repellent and try to avoid coastal vegetation as much as possible.

Protection: Once you return home from a wooded area or beach trail, check your entire body for ticks and take a shower within 2 hours, which has been shown to significantly reduce the risk of Lyme disease. Promptly remove any attached ticks you find without squeezing them, using fine-tipped tweezers to grasp the tick as close to the skin’s surface as you can. Put all your clothes in a hot dryer for 20 minutes to kill the ticks.

Symptoms: Be on the lookout for the signs of Lyme disease infection, which is typically a round, red rash at the site of a tick bite. Some rashes resemble a bull’s eye, but not all. Go for testing if you see such a rash or have classic signs of Lyme disease within a week or two: fever, chills, headache, fatigue, body aches, numbness, dizziness, and swollen lymph nodes. Early diagnosis and treatment with antibiotics are the most effective way to target Lyme disease.

Salkeld also stressed that he’s not trying to ruin anyone’s beach vacation but believes his research points up the importance of taking precautions and looking out for ticks and symptoms of Lyme disease.

“I’m not trying to put a dampener on days at the beach!” he said. “But ticks are always surprising us. … We’re finding ticks across varied habitats and throughout the year, [so] it would be well worth checking for ticks at the end of the day to make ticks a nuisance rather than the start of a medical issue.”

“You can get Lyme disease from doing anything outside — gardening, mountain biking, going to the beach, just going through the tall grass or playing out in the grassy fields with your dogs and, of course, hiking.”