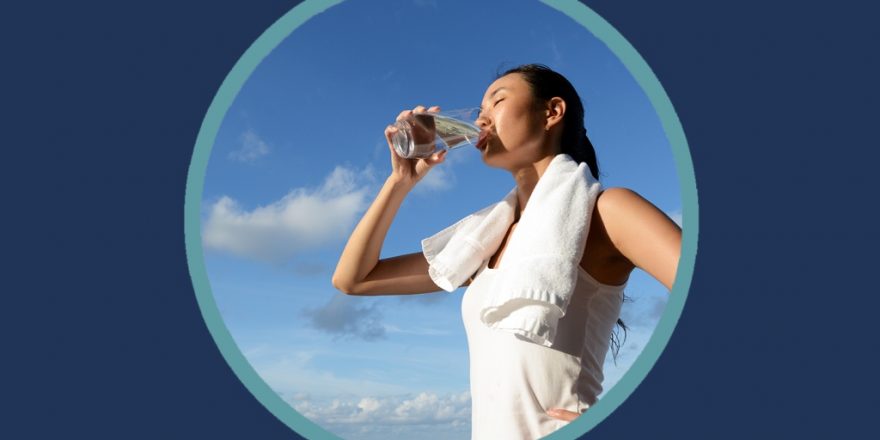 You want to exercise but it’s as hot as a mouth outside. While your first inclination is to hang out on the couch with a cold drink and the A.C. blasting high, you know you’ll regret it later if you don’t at least move your body a little bit. Even though working out might be the last thing you want to do when it’s humid outdoors, Katie Kollath, ACE-CPT and co-founder of Barpath Fitness, has a 10-minute workout to try.

“It’s a good workout to do when it’s hot because it’s just a few moves and more strength-focused than cardio so it won’t elevate the heart as much as an intense cardio workout would,” Kollath tells SheKnows. “When I am short on time I always choose a mobility movement and two to three compound movements to get the most bang for my buck in the shortened amount of time. This workout focused on strength, muscle, and mobility. So you’re getting a huge ROI even when short on time!”

Below, follow Kollath’s short workout to move your body even if it’s hot as heck outdoors.

According to Kollah, this move helps with training mobility work in the hips, and getting the legs warmed up.

Start with your feet together, and walk them out about five to seven steps. As you squat down, make sure the toes stay forward and the chest is as upright as possible. This won’t look like a traditional squat as the main focus is to get the hips to parallel in order to open up the hips, strengthen the adductor, and engage the glutes.

For this move, Kollah recommends either choosing a weight you can do for 6-8 reps and do two sets of max reps with 1-2 minutes rest in between. “This way you’re building up that fatigue in the lower body quickly.”

Place the barbell on the shoulders (or hold hand weights above your shoulders in a wide grip) and initiate the movement by slightly hinging the hips. As you lower, the hips and knees are flexing at the same time. Keep the knees in line with the toes throughout. Squat down until the hips are past parallel and then stand back up. The squat trains the whole body with the obvious emphasis on strengthening the quads, hamstrings, glutes, and the rest of the leg muscles.

“Your upper body is going to be pretty warmed up from squatting so you can go right into either of these pulling movements,” Kollath says.

If you choose pull ups she suggests doing two sets of max reps with just your bodyweight. If you’re choosing barbell rows she recommends doing something similar to the back squats – pick a weight you can do for 6-8 reps and try to do as many reps as possible for those two sets.

Start with hands about shoulder width apart and wrap the thumbs fully around the bar. Initiate the movement by retracting the scapula and pull your chin up so it clears the bar and control back down to the start position. The pull up is one of the best movements for strengthening the back and also hits the biceps, forearms, and shoulders as well.

If you’re doing the barbell row (which you can also do with dumbbells), with your feet hip-width apart, bend slightly from the hips, brace your core, and squeeze your shoulders as you row the weight until it touches your sternum then slowly lower it back down.

Keep the heat and hydration in mind!

Additionally, Kollath recommends doing about 20-30 percent less in terms of intensity and duration when it comes to working out in the heat. “You want to build up somewhat of a tolerance to the heat before pushing it.” She also highly promotes paying attention to your hydration before, during, and after your workout as well as making sure you’re getting enough electrolytes to combat the minerals lost in excess perspiration.

“Ideally, you can find an electrolyte supplement without a bunch of added sugar and make sure it includes sodium, potassium, and magnesium. Don’t fear sodium, we literally need it to survive and if you are eating a minimally processed diet you probably are not getting enough. We also lose a lot of sodium via sweat that needs to be replenished and you will definitely be sweating more if you take your workout outside in the summer heat.”

Cool down and chill out with these workout recovery essentials we’re obsessed with: