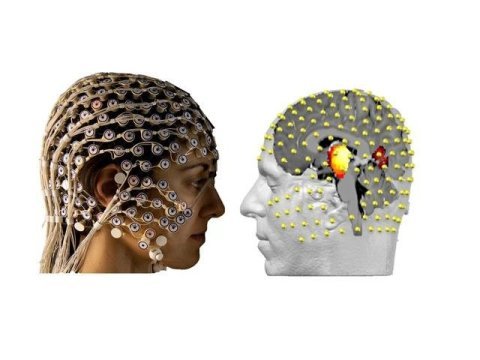 A gentle method for unlocking the mysteries of the deep brain

The subcortical areas of the brain, situated in its deepest reaches, remain a mystery. Scientists are aware of the critical role they play in motor, emotional and associative activity but do not know precisely how they work. A number of serious diseases are directly linked to these areas, including Parkinson’s, Tourette syndrome and obsessive-compulsive disorders (OCD). Existing treatments for regulating and measuring the activity of the subcortical areas are highly invasive, and sometimes work without us really knowing how. Researchers from the University of Geneva (UNIGE), Switzerland, and Cologne University (Germany) decided to see whether a non-invasive method — electroencephalography (EEG) — could be employed in tandem with mathematical algorithms to measure this brain activity externally. They proved for the first time that this technique is able to record signals usually only seen by implanting electrodes in the brain. The results, published in Nature Communications, pave the way for new, precision clinical applications.

It is very difficult to study and get close to the subcortical areas, which are located in the deepest part of the brain. We know that two key structures in these areas, the thalamus and nucleus accumbens, communicate with each other and the cortex to control motor, emotional and associative activation (higher-level thinking) via electrical oscillations. “A dysfunction in this communication causes very serious diseases in humans, such as Tourette’s and OCD, which generally begin in adolescence when the brain’s development comes to an end, as well as Parkinson’s disease,” explains Christoph Michel, a professor in the Department of Basic Neurosciences in UNIGE’s Faculty of Medicine.

Current treatments, based on deep brain stimulation are highly invasive: implanting electrodes into the centre of the brain, which are stimulated electrically by an external stimulator. “Although this technique has been shown to be effective in Parkinson’s, unfortunately it doesn’t work so well for OCD and Tourette syndrome,” says Martin Seeber, a researcher in the Department of Basic Neurosciences and the study’s first author.

To improve existing treatments, it has become essential to understand how these subcortical zones function and how they communicate. The diseases mentioned above only affect humans, however, and suffer from insufficient animal models. Since implanting electrodes is an extremely invasive technique, another method was called for to increase the number of subjects studied. “We naturally thought of EEG, which records the electrical activity of the brain using 256 electrodes placed on the scalp,” continues Michel. But is it really possible to measure deep brain activity from outside the skull?

In collaboration with a team headed by professor Veerle Visser-Vanderwalle, a neurosurgeon at the University of Cologne, the UNIGE researchers were able to measure and record the electrical activity of the subcortical areas of four OCD and Tourette’s patients who had been given electrode implants. At the same time, these individuals were equipped with an EEG as the scientists measured the activity of the same areas from the surface. “The mathematical algorithms that we developed meant we could accurately interpret the data provided by the EEG and ascertain where the brain activity was coming from,” says Seeber. And the verdict? The results correlated perfectly. “In obtaining highly similar signals as with the implants, we finally proved that surface EEG can be used to see what is happening in the deepest part of the brain without having to go into it directly!” says professor Michel.

The door is open to new precision treatments

“Now that we know that EEG can be used to analyse the subcortical zones,” continues Seeber, “we can try to understand how they communicate with each other and the cortex in the hope that we’ll be able to better understand the causes of diseases such as Tourette’s and OCD.” The scientists are also keen to use the technique to improve current treatment methods, based on rebalancing network interactions using a very slight electric shock. They would also like to apply them to other diseases such as obesity, addiction or Alzheimer’s. “Lastly, we hope that in time we’ll be able to stimulate the deep brain areas from the surface via an electromagnetic treatment, doing away with electrode implants in the brain once and for all!” concludes professor Michel.