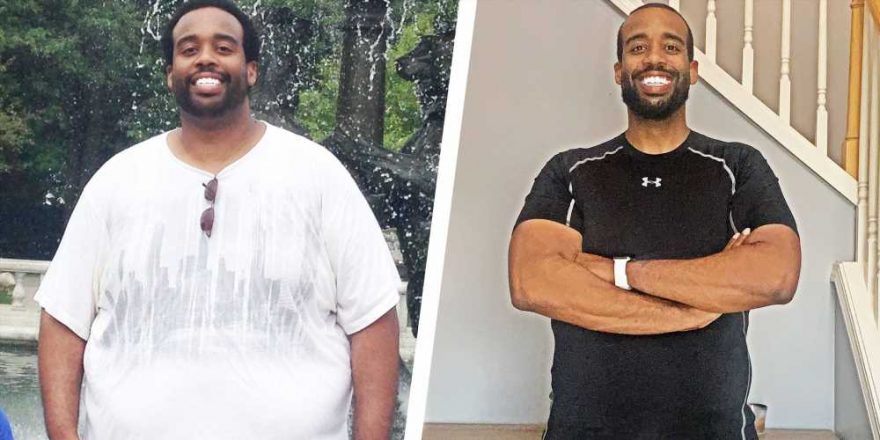 Most people with desk jobs can relate to the way Jason Phelps gained weight: When you go from being active in your teens and early twenties to spending hours a day sitting, you sometimes don’t even notice it at first. “I’d always been a little heavy,” he says, “but starting in my late twenties, my activity level declined as I started my career.”

Phelps, 40, who works as a manager for tax and accounting consultants in Ann Arbor, Michigan, says that while poor diet and lack of exercise were two important contributors, the biggest factor was his own denial. “The weight gain was relatively slow, so it was easy to ignore,” he says. “But five to ten pounds gained per year adds up to a pretty large amount over 15 years of time.”

He started that weekend—fasting for 16 hours a day on Saturday and Sunday, and was surprised by how great he felt. Continuing with the 16:8 model—eating for 8 hours, fasting for 16—Phelps began to lose as much as two or three pounds per week. Over time, a side effect was that he also became more mindful of what he was eating, and how certain foods made him feel.

“I also became much more aware of the difference between actual, physical hunger, and just being mentally ‘hungry,’ which was almost always caused by boredom, routine, stress, or cravings for a specific type of food,” he says. “I learned quickly that if I was able to push past my mind telling me that I was hungry, that within an hour or so that hungry feeling would be gone.”

Two weeks after getting started, however, Phelps encountered another setback: He broke his foot. “That was scary because I remembered breaking my other foot back in my twenties, and gaining weight afterwards because of inactivity,” he says. “But this time was different—I was determined to take what was a weakness and make it into a strength.” On that note, he bought a heavy bag for the house, and started hitting it every morning even though his foot was in an air boot. Once his foot healed, he continued to do HIIT-style cardio workouts in the morning, but also went to the gym to lift weights, focusing on compound barbell movements.

The effect on his weight was instant—and dramatic: Over the span of a single year, he dropped close to 120 pounds, and says he still has another 30 or so to go to hit his goal.

“I can’t even explain how much better I feel. My overall energy level is way higher. My mobility and strength are greatly improved,” he says. “But I know I’m not at my goal yet and I am as motivated as ever to keep pushing.”

For those trying to follow his lead, Phelps says consistency and patience are the two most important factors. He found what worked for him—other diets didn’t stick, but intermittent fasting is something he feels he can keep up for the rest of his life. For someone else, it might be keto, or working with a trainer, or counting calories. “Understand that it won’t happen overnight,” he says. “Make small changes at first until they become a habit. Then progressively add more and more habits, and build momentum along the way.”