Is air pollution making us fat? Children who live in smog-filled cities are more drawn to fatty foods as adults, study finds

Living in smog-filled cities as children can make us eat fattier foods as adults, a new study finds.

Researchers say that high levels of particles from power plants and exhaust systems was linked to an increased risk of eating a high trans-fat diet by 34 percent.

They also found that the increased levels made people more likely to eat dinner at fast food restaurants rather than at home.

It’s not clear exactly why this is the case, though experts say it may be to do with pollutants disrupting how our body absorbs energy from food, sending blood sugar levels plummeting and hunger rocketing.

Regardless of the reason, the team, from the University of Southern California, says their evidence suggests lowering the levels of air pollution in cities across the US could be one way to curb the obesity epidemic that is crippling the American population. 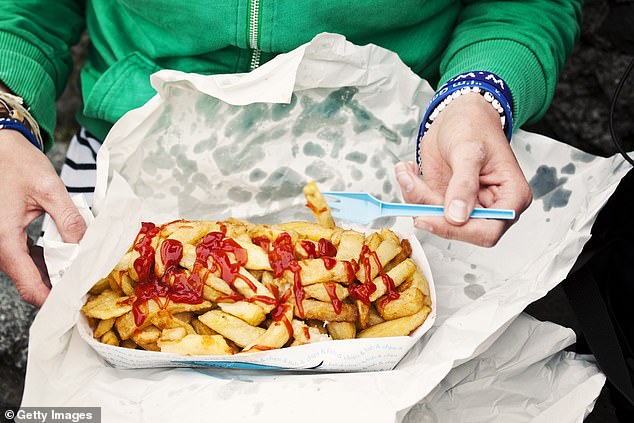 For the study, published in the American Journal of Clinical Nutrition, the team looked at 3,100 children.

They had been enrolled in the USC Children’s Health Study – which looks at the long-term effects of air pollution on children’s respiratory systems – between 1993 and 1994 and were followed for four to eight years.

Meanwhile, the researchers measured pollutants, including from power plants and car exhausts, and estimated the concentration for participants’ residential addresses.

The team adjusted for factors including household income, parents’ education levels and fast-food restaurants within a 500-meter radius from a child’s home or school.

They found that the more exposure a child had to air pollutants, mainly from traffic, the more likely they ate a diet high in trans fat.

For example, they looked at emissions of nitrogen dioxide (NO2). Safe levels are currently set by the Environmental Protection Agency at 100 parts per billion per hour.

But researchers saw that with every increase of 12.2 parts per billion, adolescents were 34 percent more likely to eat foods high in unhealthy trans fats.

Higher exposure to NO2 and elemental carbon – which are emitted from fossil fuels – was linked to a higher consumption of fast food.

‘Given how rapidly the brain matures throughout childhood and adolescence, it’s a time frame when environmental factors could have potentially long-lasting effects on brain and behavior,’ said first author Dr Zhanghua Chen, a postdoctoral research associate at the Keck School of Medicine of USC.

‘We plan to conduct more studies to investigate the role of air pollutant exposures in changes of brain function, dietary behavior and obesity onset in the future.’

Although it’s not exactly clear how air pollution leads to obesity, scientists believe breathing in pollutants can cause inflammation in the body.

These particles irritate the alveoli – the tiny, elastic air sacs in your lungs – and cause oxidative stress, which releases hormones, according to Dr Michael Mosely.

The new study adds to a growing body of research about the ill effects of air pollution on human health.

In August 2018, a study from the University of Texas at Austin found that air pollution was shaving years off of the global life expectancy from an average of four months in the US and UK to two years in Egypt.

And in October 2018, a study from Quest Diagnostics Nichols Institute in California found that living in smog-filled cities raised the risk of mouth cancer for men by up to 40 percent.