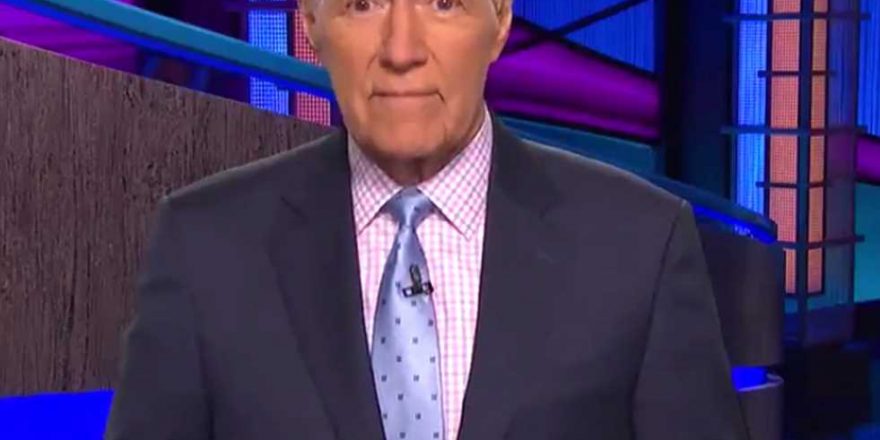 The Emmy-winning host, 78, opened up about his condition in a video posted to the beloved game show’s official Twitter account, assuring viewers that he was “feeling good” and thanking them for their support during his trying time.

His message came as he filmed the final day on set of Jeopardy!‘s 35th season. Trebek has hosted the show since it first premiered in syndication back in September 1984.

“Some of you may recall that at the beginning of this season I promised you that we had some surprises in store for you,” Trebek said in the clip. “Well, of course, I had no idea at that time that there were some surprises in store for me as well. So here, on the last day of taping for our 35th anniversary season, I want to once again thank you for your continuing messages of encouragement and support. Particularly, the many cards I have received from young people. I am touched beyond words.”

“I’ve always tried to be straight with you and I’m not going to stop now,” he continued. “So, despite what you may have heard, I’m feeling good, I’m continuing with my therapy and we — by we, the staff — is already working on our next season, the 36th year of Jeopardy! So I look forward to seeing you once again in September with all kinds of good stuff.”

Trebek first shared his cancer news with fans in a similar video message posted to social media on March 6. In that clip, he vowed to courageously “fight” the disease and also continue working on the game show.

“Just like 50,000 other people in the United States each year, this week I was diagnosed with stage 4 pancreatic cancer,” Trebek said. “Now normally the prognosis for this is not very encouraging, but I’m going to fight this and I’m going to keep working. And with the love and support of my family and friends, and with the help of your prayers also, I plan to beat the low survival rate statistics for this disease.”

Despite the grave diagnosis, Trebek quipped that he must continue working because of the terms of his contract through the 2021-22 season.

“Truth told, I have to because under the terms of my contract, I have to host Jeopardy! for three more years!” he joked. “So help me!”

“Keep the faith and we’ll win,” he concluded, “We’ll get it done. Thank you.”

Just six days later, Trebek was back to work, a rep confirmed to PEOPLE. He has kept up with his filming obligations since.

Throughout it all, Trebek has remained grateful to the fans for standing by him

In another video message shared in March — just two days after he got back to work — Trebek thanked the “hundreds of thousands of people who have sent in tweets, texts, emails, cards, and letters wishing me well following my recent health announcement.”

“I’ve heard from former contestants — even Watson, the IBM computer sent me a get well card!” he revealed.

“Now obviously, I won’t be able to respond to all of you individually but I did want you to know that I do read everything I receive and I am thankful for the kind words, the prayers, and the advice you have offered, and I’m extremely touched by the warmth you have expressed in your comments to me,” Trebek said.

To wrap up his heartfelt message, Trebek simply stated: “I’m a lucky guy.”

Trebek shares two children — Matthew, 29, a restaurateur in Manhattan who owns Oso (a popular Mexican restaurant in North Harlem), and Emily, 27, who works in real estate in Los Angeles — with his wife of 29 years, Jean Currivan.

Two months before revealing his serious health news, Trebek opened up to PEOPLE about his retirement plans.

“They’ve been wondering [if I’m going to retire] for years,” the longtime host said. “Somebody asked me once, ‘Have you given any thought to retiring?’ This was about seven, eight years ago. And I said, ‘Yes I have.’ Well, all of a sudden, Trebek is retiring. No. He has thought about retirement!”

Admittedly, Trebek said he’d be “lost” without the show.

He continued, “You get to a certain age, and if you’ve been doing the same show for 30 years, or the same job, whatever it is, for 30 years, wouldn’t you think about retirement? What am I gonna do? I’m enjoying myself and I’m having a good time with what I’m doing now, but if I were to retire, what would I do? I’d be lost.”

“My wife would say I’m getting on her nerves because I’m around all the time,” he joked. “I’m around most of the time anyway now except for two days.”