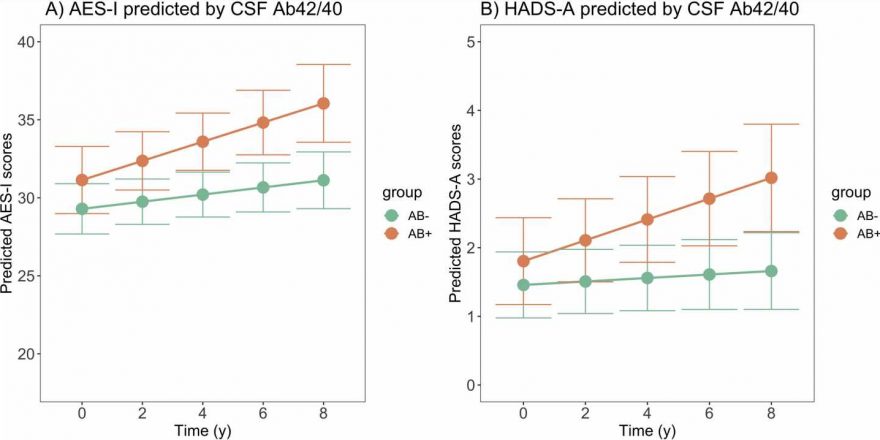 Alzheimer’s disease (AD) eventually leads to severe cognitive decline, but most affected individuals also develop distressing neuropsychiatric symptoms. These earlier effects may be more subtle and are not well understood; it remains unclear whether they arise directly from AD pathology or secondarily as psychological reactions due to the cognitive deficits. Now, a new study examines the connections between biomarkers of AD’s hallmark neuropathology, cognition, and other neuropsychiatric symptoms. The study appears in Biological Psychiatry, published by Elsevier.

The researchers, led by Oskar Hansson, MD, at Lund University in Sweden, tested cerebrospinal fluid or blood plasma from 356 cognitively unimpaired older adults for levels of the proteins amyloid-beta (Ab) and tau, which are thought to contribute to AD neurotoxicity, as well as markers of neurodegeneration.

Strikingly, the presence of Ab was associated with increased anxiety and apathy. Higher levels of apathy were also related to a more rapid cognitive decline.

“Most importantly, this study signals that certain neuropsychiatric symptoms such as apathy and anxiety develop predominantly due to underlying AD-related pathology and not due to the concomitant cognitive impairment,” said Maurits Johansson, MD, lead author of the study. “It seems reasonable that neuropsychiatric symptoms would arise from neuropathology just as cognitive deficits do, especially because AD ultimately affects large areas of the brain,” he added.

The study did not exclude a role for cognitive impairment altogether. For example, in one of the statistical analyses, cognitive decline slightly but significantly mediated the effect of amyloid pathology on the development of apathy.

“Combined with earlier studies, our findings strengthen the proposed idea that cognitive deficits and neuropsychiatric symptoms can develop independently, yet in parallel to one another. They have a common underlying neuropathology, but to some extent they can also reinforce one another,” said Professor Hansson.

“These findings could ultimately lead to more efficient study design of clinical trials for AD in that they point to neuropsychiatric symptoms as potential alternative outcome measures,” concluded Professor Hansson.