Home » Health News » Baby acne vs. eczema: How to tell the difference 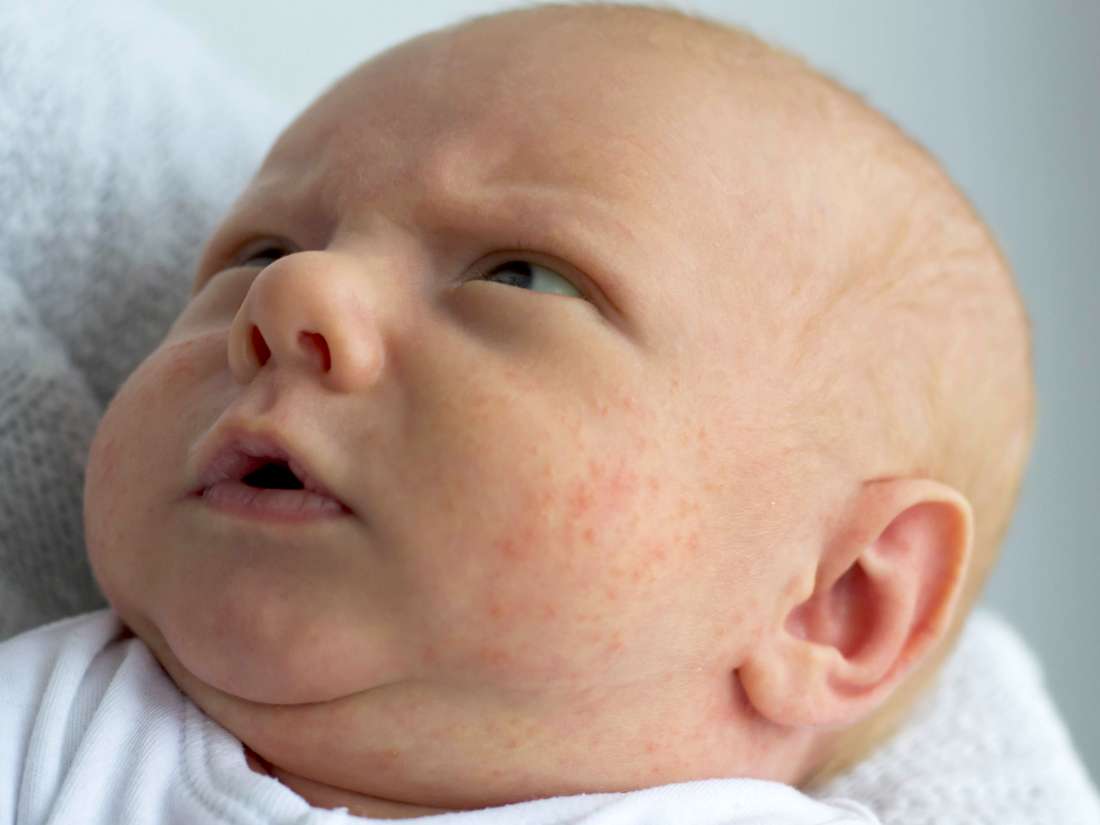 Baby acne vs. eczema: How to tell the difference

Both baby acne and eczema are treatable, and the symptoms are usually temporary.

In this article, we outline the characteristics of baby acne and eczema and explain how to differentiate between them.

What is baby acne?

Baby acne, or neonatal acne, is a common skin condition that affects an estimated 20 percent of newborns. It usually resolves without treatment after a few weeks or months.

Baby acne tends to develop at around 2 weeks old, but it can appear at any point before 6 weeks. In some cases, a baby may have acne from birth.

As with adult acne, breakouts of spots and pimples characterize baby acne. These tend to appear on the face, neck, chest, and back.

Parents and caregivers should take a baby to see the doctor if they develop acne after 6 weeks of age, at which stage doctors classify it as infantile acne. Infantile acne usually lasts for between 6 months and a year, but it can persist until the child’s teenage years.

Scientists are unsure as to what causes neonatal acne, but they believe that overactive oil glands and testosterone may contribute to infantile acne.

Neonatal acne will present as white pimples or red spots. Infantile acne tends to include blackheads and whiteheads as well as pimples and spots, and it may also cause cysts.

People may mistake eczema for a different type of rash on the skin. For babies under the age of 6 months, eczema will usually appear red and weepy. If it becomes infected, the skin can develop a yellow crust or small lumps that contain pus.

Neonatal acne tends to develop in the first 6 weeks of life, while eczema usually appears between 6 months and 5 years of age.

Infantile acne, which is less common than neonatal acne, typically develops between the ages of 3 and 6 months.

Affected areas of the body

The two conditions tend to affect different parts of the body, although there is some overlap.

Baby acne breakouts tend to occur on the:

In the first 6 months of life, eczema will usually appear on the:

Eczema often develops on a baby’s elbows and knees at between 6 and 12 months of age.

It will sometimes also spread to other areas, but it does not affect the diaper area. A rash in this area may be diaper rash.

Neonatal acne will usually go away by itself within a few weeks or months. It does not generally require treatment.

The American Academy of Dermatology offer the following skin care tips for babies with neonatal acne:

Infantile acne also usually clears up by itself, but this may take significantly longer. It can persist for 6 months to a year, and some children will experience the acne up until their teenage years.

In some cases of infantile acne, a healthcare professional may prescribe antibiotics or creams to prevent scarring.

While there is no cure for eczema, several different treatments can help ease the symptoms. The most appropriate treatment depends on the type, location, and severity of the condition.

It is vital to always speak to a doctor before using home remedies and other treatments on babies or infants.

A doctor may recommend moisturizers to treat mild eczema. These can relieve itching and protect the skin from germs and substances that might irritate it, such as pollution or laundry detergent. Learning to identify triggers and avoid exposure to them can play a significant role in managing eczema.

What else could it be?

People may also confuse other skin conditions, such as erythema toxicum neonatorum and chickenpox, with baby acne or eczema.

Erythema toxicum neonatorum is a harmless skin condition that may occur within the first couple of days of life. It causes small spots and pimple of 1–4 mm in diameter on the arms and legs. Notably, the rash does not appear on the palms of the hands or the soles of the feet. It typically clears up by itself within 5 to 14 days.

Chickenpox is a contagious skin disease that causes a rash of blister-like spots and pimples on the stomach, back, and face. The rash can spread across the whole body and tends to occur alongside itching, tiredness, and fever.

Chickenpox can lead to severe complications in babies, so anyone who suspects chickenpox in a baby should take them to see a doctor immediately.

Baby acne and eczema may look similar, but the treatments and timescales are different, so it is important to know the difference.

Neonatal acne will usually resolve with no treatment within a few weeks or months. Infantile acne may take longer to clear up, but it does not typically need treatment.

Eczema is a long-term skin condition for which there is no cure. It often disappears by the time a child reaches adulthood. Many different treatments are available to help ease the symptoms on a day-to-day basis.