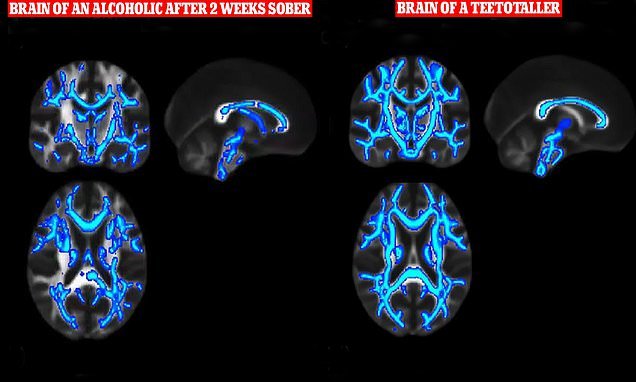 The headaches, feeling sick and tiredness caused by a hangover usually go away the next day.

But your brain may still be feeling the effects of boozing for six weeks after, a study has found.

Scientists used brain scans of alcoholics to find the white matter – parts of the brain containing nerves – continues changing after more than a month of being sober. 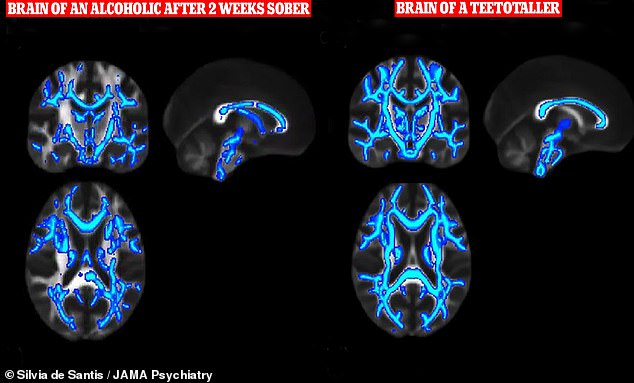 Researchers at the Spanish Institute of Neuroscience and the Central Institute of Mental Health in Germany scanned the brains of 90 alcoholic men.

The patients had ended up in hospital because of their drinking problems, and the scans were compared with 36 men who didn’t have addictions.

And while it was known that drinking alcohol changes how nerves communicate in the brain, the experts realised the changes continue when drinking stops.

Although drinking can make people feel happier and more sociable, overuse can cause damage parts of the brain controlling thoughts and movement.

Scans showed there is significantly less electrical activity in the brains of drinkers than of teetotallers – even after two weeks of sobriety.

The changes were still present in the brain after six weeks of no alcohol, according to the research published in the journal JAMA Psychiatry.

The researchers said their findings go against the conventional idea that damage from alcohol stops when the drinking ends.

Dr Santiago Canals, one of the study authors, said: ‘Until now, nobody could believe that in the absence of alcohol the damage in the brain would progress.’

The two areas worst affected, the scans showed, were the hippocampus and the prefrontal cortex.

Memories, emotions, decision-making and behaviour are controlled by these parts of the organ, suggesting these characteristics could be particularly altered.

‘We found that at two and six weeks of abstinence, the microstructural changes progressed,’ the scientists wrote in their report.

They said the travel of the nerve signals continued to be restricted in the brain.

And they added: ‘These results challenge the conventional idea that the microstructural alterations start to revert to [normal] immediately after discontinuing alcohol consumption.’

IS ALCOHOL OR CANNABIS WORSE FOR THE BRAIN?

Unlike booze, marijuana does not affect the size or integrity of white or grey matter in the brain, even after years of exposure, a study found.

The scientists add, however, research into cannabis’ mental effects are still very limited.

Lead author Rachel Thayer said: ‘Particularly with marijuana use, there is still so much that we don’t know about how it impacts the brain.’

In the US, 44 percent of those aged 12 or over have used cannabis at some point in their lives.

Although their findings appear positive, the researchers also add there is a long way to go before cannabis will likely be broadly legalised.

Many are still concerned as to how the class-C drug affects people of different ages, manages pain and causes addiction.