Home » Health News » COVID, RSV and the Flu: A Case of Viral Interference? 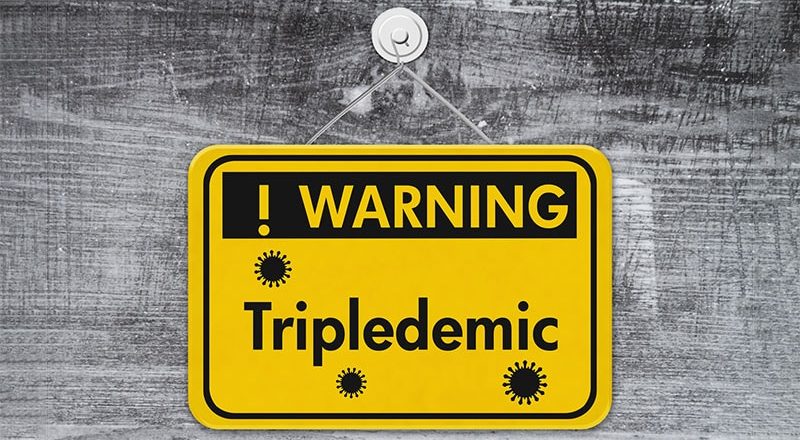 COVID, RSV and the Flu: A Case of Viral Interference?

Three years into the pandemic, Covid-19 is still going strong, causing wave after wave as case numbers soar, subside, then ascend again. But this past autumn saw something new — or rather, something old: the return of the flu. Plus, respiratory syncytial virus (RSV) — a virus that makes few headlines in normal years — ignited in its own surge, creating a “tripledemic.”

The surges in these old foes were particularly striking because flu and RSV all but disappeared during the first two winters of the pandemic. Even more surprising, one particular version of the flu may have gone extinct during the early Covid pandemic. The World Health Organization’s surveillance program has not definitively detected the B/Yamagata flu strain since March 2020. “I don’t think anyone is going to stick their neck out and say it’s gone just yet,” says Richard Webby, a virologist at St. Jude Children’s Research Hospital in Memphis. But, he adds, “we hope it got squeezed out.” Such an extinction would be a super rare event, Webby says.

But then, the past few years have been highly unusual times for human-virus relations, and lockdowns and masks went a long way toward preventing flu and RSV from infiltrating human nostrils. Still, Webby thinks another factor may have kept them at bay while Covid raged. It’s called viral interference, and it simply means that the presence of one virus can block another.

Viral interference can happen in individual cells in the lab, and in individual animals and people that are exposed to multiple viruses — but it can also play out across entire populations, if enough people get one virus for it to hinder the flourishing of others at scale. This results in waves of infections by individual viruses that take turns to dominate. “Looking back over the past couple of years, I’m pretty confident in saying that Covid can certainly block flu and RSV,” Webby says.

It wouldn’t be the first time that scientists have observed such patterns. Back in 2009, for example, the virus to fear was swine flu, which had jumped from pigs to people in spring of that year. It looked poised to ramp up as autumn arrived — but suddenly, in some parts of Europe, it stagnated. The rhinovirus, responsible for the common cold and likely spread by children returning to school, took center stage for a series of weeks before swine flu recaptured dominance. That flu strain then delayed the typical autumn rise of RSV by as much as two and a half months.

There are a number of ways that interference can happen in the body. One occurs when two viruses use the same molecule to gain entry into host cells. If virus A gets there first, and grabs on to all those molecular doorknobs, then virus B will be out of luck.

Another kind of interference might happen if two viruses compete for the same resources inside the cell, such as the machinery to make new viral proteins or the means to escape that cell to infect others. “Think of it as a race between two viruses,” Webby says.

But the best-understood method of interference concerns a defensive molecule called interferon that’s made by cells of all animals with backbones (and possibly some invertebrates too). Indeed, viral interference is the reason interferon got its name to begin with. When a cell senses a virus, any virus, it starts making interferon. And that, in turn, activates a slew of defensive genes. Some of the products of those genes work inside the cell or at its boundaries, where they prevent additional viruses from entering and block viruses already present from replicating or exiting the cell.

Cells secrete interferon into their surroundings, warning other cells to put up their guard. The result of all this: If a second virus then comes along, cells have their defenses already activated, and they may be able to shut it out.

This “beware” message can spread throughout the body. So, in theory, getting a respiratory virus such as the rhinovirus could activate defenses in, say, the gut, protecting the same person from an entirely different virus, such as norovirus. But the situation will vary depending on the viruses involved, the amount of interferon produced, and other factors. “Most of the viruses themselves have ways to neutralize the interferon system,” says Ganes Sen, a virologist at the Cleveland Clinic in Ohio, who wrote about the interactions between interferon and viruses for the Annual Review of Virology in 2015. “It’s a tug of war.”

Scientists study that back-and-forth in animals and other systems in the lab. For example, Ellen Foxman, an immunologist at Yale School of Medicine, investigates viral interactions in lab-grown tissues made from real human airway cells. In one experiment, she studied swine flu and a typical representative of the rhinovirus family. When the researchers infected the human tissue first with the rhinovirus, and then with swine flu, interferon prevented the flu from getting a foothold. In similar studies, she found that rhinovirus infection also interfered with subsequent SARS-CoV-2 infection.

It’s iffy to extrapolate from tissues in the lab to people or populations, but Foxman thinks the studies reflect biological truth. “It’s probable that if you get a rhinovirus infection, that’s going to make you relatively resistant to another virus for some period of time,” she says. Foxman speculates that the protective effect probably lasts days or weeks.

But don’t go counting on a cold granting you temporary immunity from other viruses. Interference isn’t guaranteed: It’s certainly possible to catch more than one virus at the same time. And interferon isn’t always beneficial, either; sometimes, it can make people more susceptible to infection, not less. A well-known example is that the flu makes people more susceptible to a secondary bacterial infection.

In the ongoing pandemic, it’s still hard to say how much of a role, if any, interference played in shutting down RSV and flu in populations around the globe. During the first Covid wave in 2020, Foxman thinks that not enough people had Covid for it to be interfering with other viruses on a grand scale. (RSV underwent an unusual summer peak in 2021 as people eased up on masking and other precautions.)

But by the second Covid winter, in 2021-22, Webby thinks he sees population-level evidence for interference. Influenza was starting to pick up in the fall, he says, but then the omicron variant of Covid burst onto the scene. Flu rates fell — even though people were back at work and school and traveling for the holidays. The coronavirus had a big advantage that season, he says, because many people still lacked immunity to it. It doesn’t mean Covid will always edge out influenza in the future.

In the third Covid winter now underway in the Northern Hemisphere, conditions are different yet again. Many people now have immunity to Covid, from a recent bout or from vaccination, but fewer have experienced RSV or flu in recent memory. That set the scene for flu and RSV to stage a massive dual comeback, hitting early and hard.

Any potential interference during the 2022-23 tripledemic winter will become more obvious once epidemiologists can look back on the season and see if each virus took its turn. Already, there are indicators that the fall surges of RSV and flu might have peaked, while Covid is on the upswing after the winter holidays. But there are still several cold months to come, providing ample opportunity for any of the trio to rise again.

Amber Dance is a Knowable Magazine contributor in Los Angeles. Every time she’s ill, she marvels at the ability of tiny viruses to lay her out.

This article originally appeared in Knowable Magazine on January 12, 2023. Knowable Magazine is an independent journalistic endeavor from Annual Reviews, a nonprofit publisher dedicated to synthesizing and integrating knowledge for the progress of science and the benefit of society. Sign up for Knowable Magazine’s newsletter.