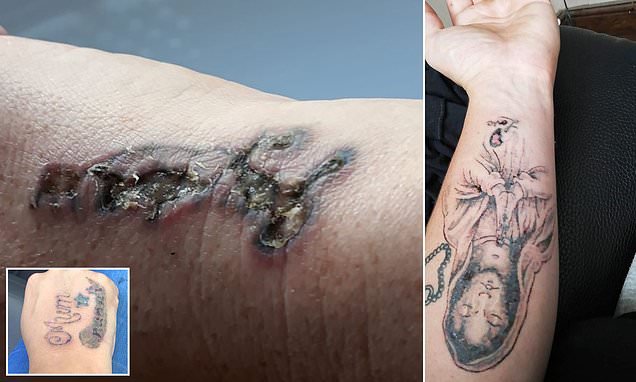 Customers who were treated for laser tattoo removal by the same business have shared their horrifying photos of when the procedure went wrong.

They claim to have experienced blistering and burning sensations, after paying as little as £35 and up to £400 for the treatment.

But the tattooist who removed all of their inkings, Steven Anthony Prophet, said he is ‘safe’ and the reactions are normal.

There is no licensing regime or specific legislation dealing with the use of lasers for the removal of tattoos.

Toni Gordon, from West Didsbury, paid £230 at Invisible Ink Mcr to remove two tattoos on her hands ahead of a wedding she was attending. Pictured, after the treatment 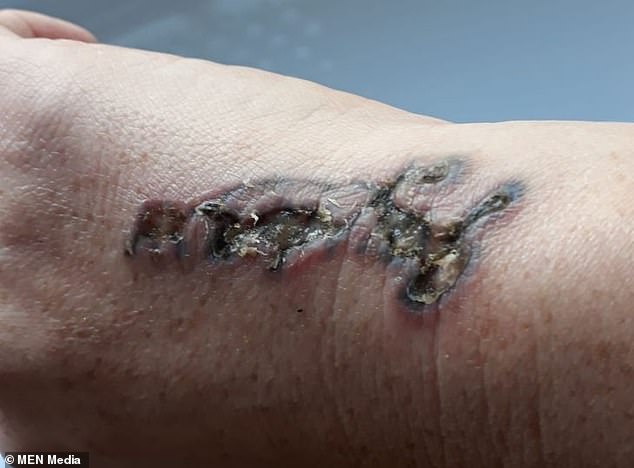 Ms Gordon said: ‘The blisters popped and it went into holes. There was gunk coming out’

Mr Prophet began treating people in June this year after setting up his business on Facebook.

He has since closed his operation down, and is trying to get the money together to refund the angry customers.

Toni Gordon, from West Didsbury, paid £230 to remove two tattoos on her hands ahead of a wedding she was attending.

She said: ‘I expected it to hurt and it was stinging afterwards. It was the next day when it started to blister – I thought maybe that’s not what it’s supposed to do.

‘It just got worse and worse. The blisters popped and it went into holes. There was gunk coming out.

‘I was ready to go to the doctor – my partner wanted me to but I think I was just embarrassed because it was him who paid for it.

‘I didn’t have any other symptoms so I ended up going to the chemist and buying dressing and cream.’

Ms Gordon’s blistering began to heal although she believes she will be left with permanent scarring.

HOW DOES LASER TATTOO REMOVAL WORK?

The body does try to get rid of tattoo ink the same way it would a splint, but the ink particles are larger than the white blood cells, making this process extremely slow.

The energy from the laser breaks down the tattoo ink into tiny fragments which can be absorbed into the bloodstream and safely passed out of the body.

Different types of ink and colours can take longer to remove.

Footage of people getting laser tattoo removal makes it look like the ink instantly disappears, but this is just water in the skin being heated up and temporarily obscuring the tattoo.

Private clinics in the UK usually charge around £150 per session for the removal of a small tattoo.

John Westby, 26, shared an image of his ‘burns’ around a love heart on his arm tattoo after one session of treatment.

He said: ‘This is what he did to my arm but it was worse than that, as this was when I spotted it.

‘As you can see, where the holes are and the love heart, I didn’t want touching as me and the missus have matching ones and I wasn’t happy at all.

‘I know I only paid 35 quid but that’s not the point I work hard for that money and spent it on my arm to get this tattoo lasered.’

Another customer, Bee Clark, shared images of the blistering on her arms that she paid £175 to have three sessions on.

She said: ‘It was painful and now it’s in a bit of a mess. I’m waiting to speak to a specialist because I have psoriasis anyway.

‘I would say if you’re thinking about laser tattoo removal, make sure they are professional and qualified.’

Paul Ellis paid £400 for ‘as many sessions as required’ for two tattoos to be removed – one on each arm around the bicep area.

He said the first session left him ‘blistered and burnt’ and took six weeks to heal.

Mr Ellis assumed this was normal for the process, although he claimed there were no medical questions asked before he had the treatment.

Mr Prophet said he treated some people while working at a premises but mostly operated as a mobile business.

He insisted he completed a day’s training course with professionals and further training online prior to using the laser machine.

Asked about the images of Ms Gordon’s arm, he said this was a result of her not carrying out proper aftercare.

John Westby shared an image of his ‘burns’ around a love heart on his arm tattoo after one session of treatment. He said he paid £35 but it was hard-earned money 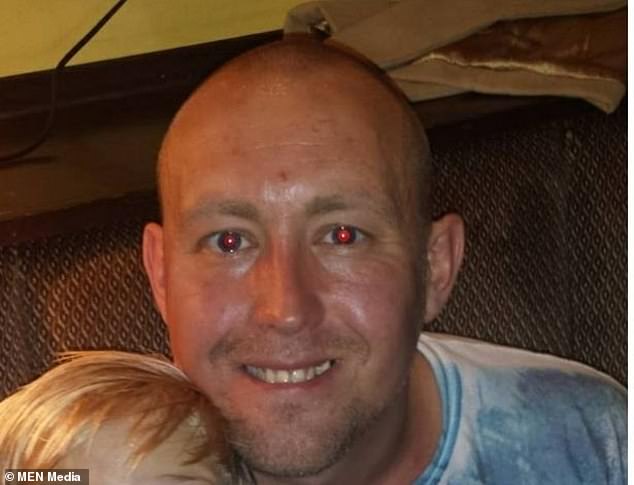 Steven Anthony Prophet said he is trying to pay refunds, but claims he ‘is safe’. He said blistering is ‘100 per cent normal’ and that he had proper training

He said: ‘Blistering is 100 per cent normal. You have to keep the area clean and keep it moisturised – it’s your own personal hygiene.

‘I’ve got a whole lot of happy customers, it’s only a small minority [who are making complaints].

‘Everybody blisters, people react to it differently. Every time I go to a house I would always ask if there’s any health issues I need to be aware of. I am safe.’

Mr Prophet concedes that he has been forced to close partly due to the images shared by unhappy customers.

He said: ‘I fully accept some people want refunds. Anyone who wants a refund, or to continue their treatment, I will do that.

‘I’m trying my very best to raise funds, I’ve already tried to get a loan. I’m not hiding, far from it.’

Tattoos were once considered permanent, but advances in ‘Q-switched lasers’ led to complete or partial removal becoming possible in the 1990s.

The industry is now a fast-growing market, and a recent survey by the British Association of Dermatologists found as many as one in three people now regret a tattoo and would like to have it removed.

The laser works by breaking down the ink particles and allowing them to be absorbed by the body’s natural healing system.

Depending on the size and complexity of a tattoo, it can take between six to ten sessions to be completely removed.

In the UK, private clinics charge about £150 a session to remove a small tattoo and up to £800 for a larger one.

Experts say the procedure isn’t gentle, regardless of which laser system is used, and you should expect some degree of scarring.

Officers at Trading Standards are now assessing if there has been any wrongdoing by Mr Prophet.

The Health and Safety At Work Act does apply if the work was carried out in a premises as businesses have a duty to ensure that customers do not face unacceptable risks resulting from their work activity.

If the work was taking place in a domestic premises then the enforcement responsibility would be the Health and Safety Executive.

The NHS advise to take time ‘to find a reputable practitioner who practices in a clean, safe and appropriate environment’.

Councillor Rabnawaz Akbar, Executive Member for Neighbourhoods, said: ‘Individuals who practise laser tattoo removal are obliged to adhere to the Health and Safety at Work Act and must ensure their customers do not face unacceptable risks as a result of their work.