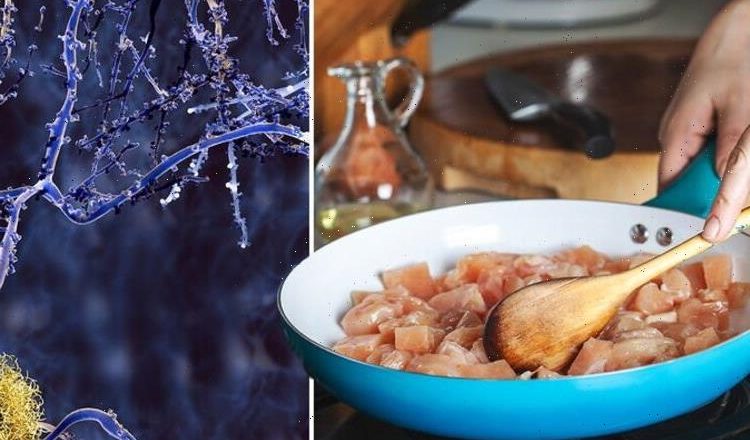 Dementia: The common cooking habit that might ‘progress’ towards Alzheimer’s – new study

Alzheimer’s disease – a brain disorder that slowly destroys memory and thinking skills, and, eventually, the ability to carry out even basic tasks – is the most common cause of dementia. Rates of Alzheimer’s are on the rise as populations age, although it is not directly caused by the ageing process. In fact, a new study suggests a particular way of cooking can spur on its development.

Nanoparticles, also known as ultrafine particles, can be released during domestic cooking. Fine particles are released from activities such as frying and roasting in particular.

Mehdi Amouei Torkmahalleh, Assistant Professor at NU SEDS, and colleagues investigated the brain activity of individuals before, during, and after exposure to ultrafine particles from cooking.

Ultrafine particles, which can be found in cooking fumes, are incredibly small and able to penetrate the human body.

Participants were present during the frying of a chicken drumstick on a gas stove and therefore exposed to cooking ultrafine particles.

Brain activity was recorded using an electroencephalograph (EEG) before cooking, at the end of cooking, and 30 minutes after cooking.

Ultrafine particle concentrations in the air were constantly monitored, which reached peak levels during frying.

They found that beta waves of the brain decreased during exposure to the ultrafine particles, similar to people with neurodegenerative diseases.

Also, the theta/beta wave ratio of the brain increased during and after exposure, similar to that observed in early-stage Alzheimer’s disease.

Unstable theta and beta brain waves are associated with certain neurologic disorders, such as dementia.

The researchers found brain activity for most would return to normal within 30 minutes.

Professor Torkmahalleh said: “Brain responses after long-term exposure may deteriorate with time and, after sufficient long-term exposure, never revert to pre-exposure levels leading to a similar status to neurodegenerative disease. This is a novel hypothesis for our current and future research studies. This suggests that people chronically exposed to cooking aerosol might progress towards Alzheimer’s.”

The changes to brain wave patterns during and shortly after exposure could be due to the ultrafine particles from the cooking fumes reaching the brain through the nose.

The advice echoes conclusions from other health bodies.

According to an article published in the journal Nature, ultrafine particles can travel up the olfactory nerves to the brain and cause cerebral and autonomic dysfunction.

The exact cause of Alzheimer’s disease is not yet fully understood, although a number of things are thought to increase your risk of developing the condition.

How common is it?

The NHS says: “Alzheimer’s disease is most common in people over the age of 65.”