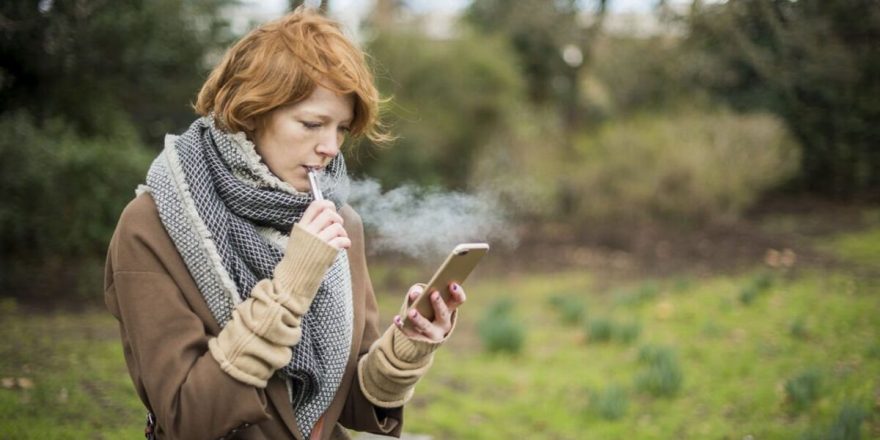 Smoking and vaping: NHS shows difference between the two

Research presented at the American Heart Association’s Scientific Sessions in October 2022 highlighted the potential harms of vaping, including raised blood pressure. “When you have a study indicating that vaping brings an increased risk of cardiovascular issues in adults, you have to wonder what the effects of prolonged vaping will be,” Doctor Fisher pondered. “Prolonged high blood pressure comes with an increased risk of suffering a heart attack or stroke, eye and kidney problems, and heart failure,” he added.

“Unsurprisingly, there’s an effect on their respiratory system, too.”

People who vape are more likely to suffer from a chronic cough compared to those who do not vape or smoke.

“Vaping can also reduce the function of the lungs overall,” warned Doctor Fisher.

“When you have evidence like this, it’s clear that those who believe vaping is just ‘water vapour’ are sorely mistaken,” he stated.

READ MORE: Dyspnoea is ‘key red flag’ symptom of lung cancer that appears in 70% of patients

For those who are vaping and coughing, Doctor Fisher said the “simple answer would be to stop or to cut down on vaping”.

Understanding that this “isn’t something everyone can just do”, he advises to drink more water.

Alternatively, coughing “may be a sign that you need to lower the amount of nicotine in your vapes”.

At present, there are many disposable vapes that contain 20mg/ml of nicotine, but there are options to have liquids containing “zero, three, six or 12mg/ml”.

Doctor Fisher revealed that 20mg/ml is equivalent to “around 40 cigarettes worth”.

“When it comes to oral health, the use of e-cigarettes has been found to be massively linked to cases of gum disease,” Doctor Fisher pointed out.

There have also been reports of issues with oral health, such as developing mouth ulcers.

“Vaping can indeed lead to mouth ulcers, for a couple of reasons,” said Doctor Fisher.

“The main one is that vaping causes your mouth to dry out, which can lead to your mouth and gums becoming easily irritated. Therefore, you may have a higher chance of developing ulcers.

“Vaping has also been shown to alter the bacteria within your mouth, which can make you even more susceptible to developing sores and ulcers.”

Chronic nicotine exposure seems to have a “detrimental effect” on the brain, which can increase the risk of depression.

In terms of people concerned about second-hand smoke from vaping, Doctor Fisher said “the research is still ongoing”.

At present, though, vaping products release water vapour “and not tobacco smoke”, so the “usual associated risks of second-hand smoke don’t apply here”.

People still need to be aware that vaping “could further someone’s nicotine dependency if left unchecked”.

What the NHS says about vaping?

The health body says: “Nicotine vaping is substantially less harmful than smoking. It’s also one of the most effective tools for quitting smoking.

“Vaping is not recommended for non-smokers and young people because it is not completely harmless.”

Common side effects can include:

“Ideally, if you are vaping to quit smoking, you should aim to eventually stop vaping too,” the NHS says.

Doctor Brian Fisher is the Clinical Director at the wellness app Evergreen Life.