Home » Health News » Eat like the French for a slimmer waistline? Skip the ‘magic’ leek soup

When a humble vegetable – the leek – became a plot line of an episode of the popular series Emily In Paris, viewers were shown a side of French eating culture the outside world doesn’t normally see.

In the Netflix show, during a meeting about how to promote leeks to US consumers, Sylvie, the Parisian chief marketing officer of Savoir, suggests luring Americans with “magic leek soup”. 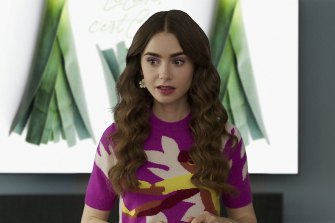 Emily (played by Lily Collins) is shocked by the idea of magic leek soup in the Netflix show Emily In Paris.Credit:Netflix

“Leeks are a diet food for French women. We boil them and drink the water,” she says. “They’re a magic trick, a little secret.”

For the English-speaking world, which has long been obsessed with French food culture, this may come as a shock. Don’t the French eat croissants, Camembert and saucisson, washed down with wine, maybe a cigarette or two, yet stay effortlessly thin?

The much-envied “French paradox” refers to the idea that France’s obesity and heart disease rates have stayed relatively low, despite people eating a lot of commonly held “bad” foods high in saturated fat.

The book French Women Don’t Get Fat reinforced this. Published in 2004, it became a runaway success, selling more than 3 million copies worldwide to readers eager to find out how to enjoy food but control their weight by eating chocolate and drinking Bordeaux like French women.

It’s this book, too, that introduced the rest of the world to the “magic leek soup”: the “ultimate non-diet book” begins with a 48-hour soup fast.

The soup is a well-known concoction that French native Valérie Nicolas, general manager of the Alliance Française de Sydney, has had before, explaining the tradition has been passed between women.

“It’s a nice legend,” Nicolas says. “It’s seen as a way to detox. You boil the leek and you just have the water.”

Normally, the soup is consumed for a maximum of two days and often before a special event, explains University of Melbourne professor of French studies Jacqueline Dutton.

“There is a great fear of becoming fat in France.”

“It’s been around forever,” Dutton says. “It’s the idea of having a flat stomach and starting off a new regime.”

But how does this marry with the indulgent narrative that’s been built about French eating? As Dutton explains, outsider notions of French food culture are based on a “historical mythology” that everyone in France finds pleasure in eating. And while it’s true that there is pleasure, the pleasure comes in many forms. 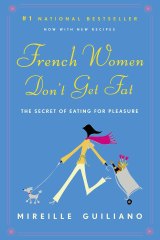 “Small portions, longer meals, more diversity in the meal, care around the anticipation and planning, and conversation during and after the meal are all as important as the food itself,” she says.

But underpinning this is something more concerning, Dutton says. Fatness is stigmatised across the West but in France, the pressure to be thin is even more amplified.

“There is a great fear of becoming fat in France,” Dutton says. “There’s an overt discrimination of people who are overweight or obese. Fatphobia – or grossphobie – is very present in French society for both men and women.”

France’s obesity rate, while rising steadily, remains low. One in 10 French people is obese, compared to one in three Australians.

A 2012 French study found that two-thirds of women and half of men wanted to lose weight, even when they had a healthy BMI. “Almost everyone is constantly thinking about what they’re eating,” Dutton says. “So there is pleasure in eating, but there is also anxiety around the results of eating.”

Nicolas, who spent the last seven years back in her home country before returning to Australia in November, says the fear of weight gain is ingrained in women and girls especially.

“[French women] have this image of being skinny and … I am just wondering sometimes if we are not creating insecurities,” she says. “Since we are very small, we are concerned about putting on weight, and that’s terrible.”

There is a famous phrase penned by French gastronome Jean Anthelme Brillat-Savarin: “Tell me what you eat, and I shall tell you what you are.” Dutton says this is part of the French psyche: “This idea of being slim means that … ‘we enjoy, but don’t go overboard’.”

There is a fine line between healthy and unhealthy – we see this in Australia, where an obsession with clean eating and fit bodies is at the root of some eating disorders – and the “secret” magic leek soup speaks directly to a quiet level of food restriction that can occur in France as people try to fit the “naturally” thin mould.

But progress is being made. Anti-sizeism events have been run by the city of Paris after French writer Gabrielle Deydier published a 2017 book, On Ne Naît Pas Grosse (“You Are Not Born Fat”), describing her experience of discrimination at work, in the health system and in everyday interactions.

France also introduced legislation in 2017 to help combat eating disorders and unrealistic beauty ideals by banning unhealthily thin fashion models and forcing commercial photos where bodies have been altered to be labelled as such, with the words “photographie retouchée” (“retouched photo”).

When the magic leek soup is proposed in Emily In Paris, Emily protests the idea and likens it to something “Gwyneth [Paltrow] would push on Goop”.

“That sounds so bad for you,” Emily says. “I just don’t think that we should be promoting weight-loss cures. Fad diets are really dangerous.”

This reaction makes sense in the context of the West’s insidious diet culture that places thinness above health. In this sense, Emily is correct, Dutton says, but she stresses that there is another context the show fails to explore.

“It could be interpreted as a faddish, quick-fix diet, which is the way Emily is interpreting it. But it could also be interpreted in its natural habitat, as part of a long tradition … and very much linked to the idea of privileging vegetables in your diet long-term,” Dutton says.

Dr Evangeline Mantzioris, accredited practising dietitian and nutrition scientist at the University of South Australia, explains that leeks have a diuretic effect, meaning they can increase the removal of water from the body. So, mostly, people drinking magic leek soup would be seeing a loss of water, she says, but it’s true that two days of this alone would also result in some fat loss.

Mantzioris says while this is similar to a fasting diet, people who subscribe to the 5:2 probably still have more kilojoules on their fasting days.

She doesn’t recommend Australians try 48 hours of magic leek soup – pointing out it has murmurings of celery juice and the lemon detox diet – but adds “it’s what you do the majority of the time that counts”.

“If you’re having the soup every weekend because you have a crappy diet during the week, then that’s the real problem,” Mantzioris says. “But if it’s once every couple of months, or [if you’re French] you might do it for nostalgia’s sake … Ultimately if you do it for only two days, it’s not like you’re doing it continually.”

“Fasting diets are very appealing right now,” Fuller says. “They’re just fancy ways of cutting calories from your diet and from a weight loss point of view, they’re not the answer. The answer is forming habits that last a lifetime.”

While magic leek soup might be best not to import, there are things we can learn from French food culture. Fuller says small portion sizes and valuing the social connectivity of food are two big ones.

Mantzioris is a fan of the respect of food preparation and quality, as well as the enjoyment. “I think that’s a really important message,” she says. “We have to eat food we enjoy, and respect the processes behind it.”

This resonates with Nicolas, who misses France’s abundance of markets, usually filled with organic produce. 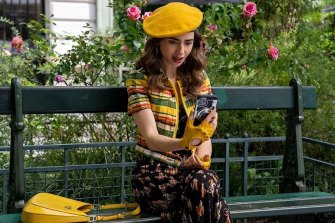 You need look no further than the beret for Emily In Paris caricatures.Credit:Netflix

“We like to take time to go to markets, to choose our vegetables, to choose our meats, which should come from [producers] we know,” Nicolas says. “There’s a very strong concern about the origin of food.”

Nicolas says that while French cuisine can be rich with butter and cream, everyday eating is often much simpler, focused on fresh produce and less sugar and processed food than the Australian diet. “We eat a lot of vegetables. More than here.”

She adds that the French aren’t big snackers either: “We are not eating between meals.”

But it’s not surprising that Emily In Paris missed all of the good parts of French eating culture. As Nicolas says of the show: “It’s funny for us because it’s a caricature.”