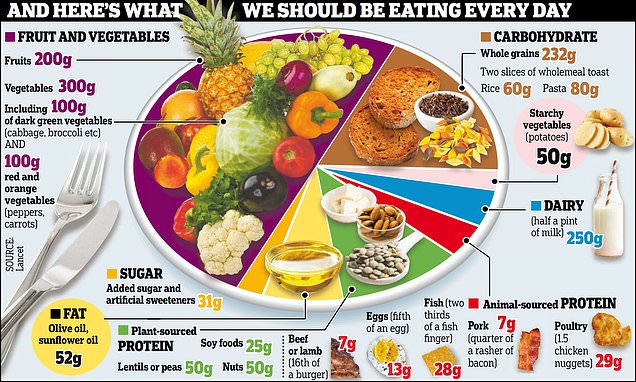 Eat less than a quarter of a bacon rasher a day to save the planet and prevent 11million premature UK deaths a year, say scientists

Families are being told to cut their consumption of red meat and sugar by half to improve their health and help save the planet.

Scientists say the adoption of a ‘planetary health diet’ is vital to feed the world’s booming population without destroying the environment.

The radical plan would mean people eating just 7g of pork a day, 7g of beef or lamb and 28g of fish – the equivalent of a quarter of a rasher of bacon, a 16th of a burger and two-thirds of a fish finger.

Experts say this would prevent around 11million early deaths by 2050 by slashing obesity, heart disease and type 2 diabetes. 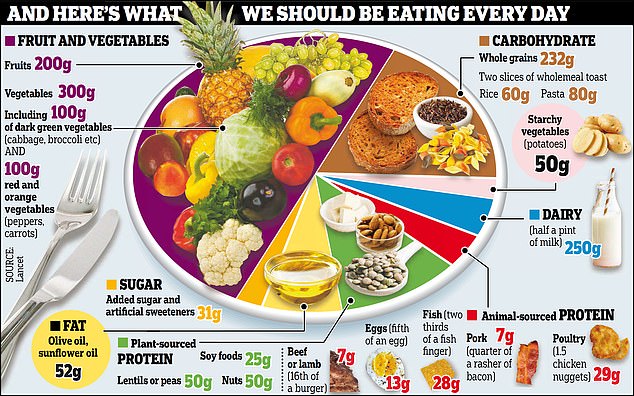 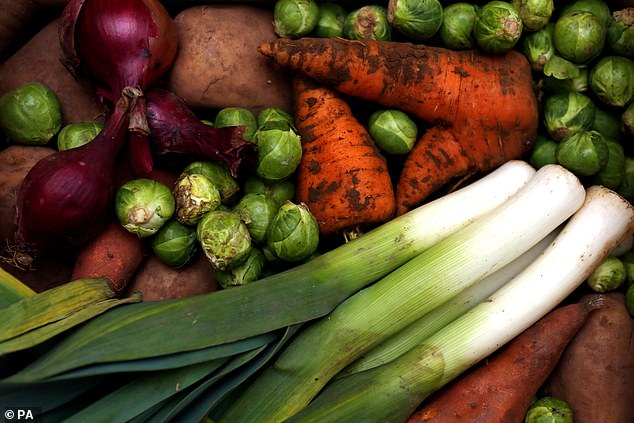 But critics dismissed the campaign being launched today as ‘nanny-state madness’.

The report was drawn up by 37 experts from 16 countries in a three-year project.

Its authors stress that the world population is expected to reach ten billion by 2050, and Earth has finite resources for food production.

They say a billion people are already malnourished, and another two billion are eating too many of the wrong foods.

Previous studies have shown meat uses 83 per cent of the world’s farmland while providing only 18 per cent of calories.

The diet, details of which were published in the Lancet medical journal, would mean a radical shift away from meat and dairy to vegetables, beans, nuts and pulses.

Average consumption of red meat in Britain would have to drop by 77 per cent from its current 62g a day.

Dairy and butter intake would be cut by 40 per cent to just 250g – the equivalent of half a glass of milk, a slice of cheese and a small knob of butter.

The consumption of eggs would fall by more than a half to a fifth of an egg a day, or one and a half a week.

Sugar intake would be cut by half to just 31g a day and potato intake by three-quarters to 50g.

But people would have to eat three times as much vegetables, beans, nuts and soya to make up the calories. 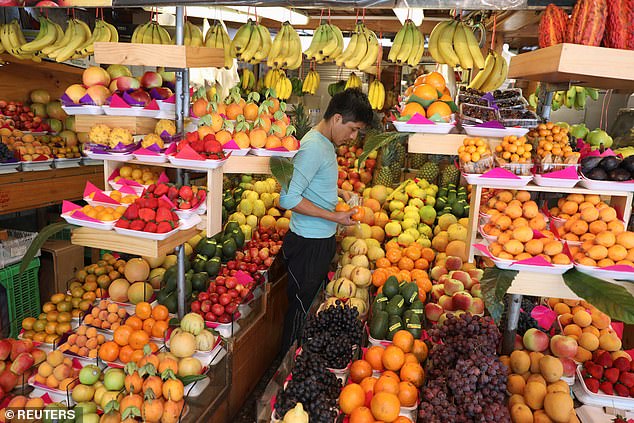 A fruit seller in Peru, the report was drawn up by 37 experts from 16 countries in a three-year project

Scientists are launching a campaign to promote the diet by calling for extra taxes on meat and for the worst foods to be taken off supermarket shelves.

Dr Walter Willett, of Harvard Medical School, one of the lead authors of the report funded by the Wellcome Trust, said the diet is achievable.

He added: ‘We are not talking about deprivation to do this. We are talking about a way of eating which can be enjoyable and flavourful.’

He said people would have to start viewing meat as a treat.

‘This doesn’t mean giving people a tablespoon of meat a day, but it means having a hamburger about once a week or, if you really like big steaks, have one once a month.’

He said those who ate the Mediterranean diet, commonly viewed as among the world’s healthiest, saw red meat as something for special occasions.

‘For me, I love lobster,’ he said. ‘But I don’t have it every day, I have it about three times a year. We need to change the way we view some foods, to make them special.’ 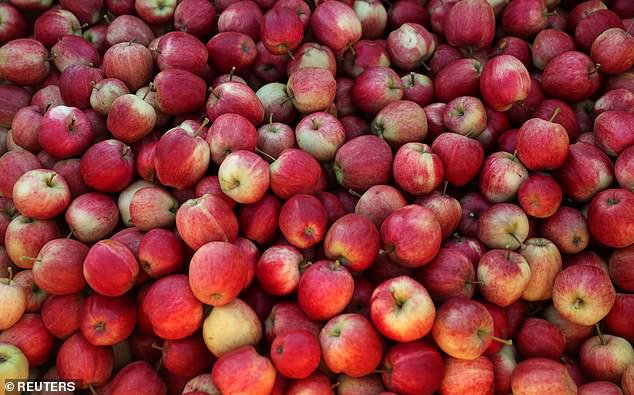 Picked apples in Suckley, England, details of the diet were published in the Lancet

Professor Tim Lang, of City, University of London, said: ‘The food we eat and how we produce it determines the health of people and the planet, and we are currently getting this seriously wrong We need a significant overhaul, changing the global food system on a scale not seen before.

‘While this is uncharted territory and these problems are not easily fixed, this goal is within reach.’

But Christopher Snowdon, head of lifestyle economics at the free market Institute of Economic Affairs, said: ‘They say “You are what you eat” and that must be true because this is nuts.

‘Most people will look at these demands and laugh, but I welcome this report because it reveals the full agenda of nanny-state campaigners.

‘They are making no secret of their desire to tax and ban their way towards a near-vegan diet for the world’s population.

‘Their desire to limit people to eating one tenth of a sausage a day leaves us in no doubt that we are dealing with fanatics.’

Dining with other people makes us eat less and could be helpful for dieters, researchers say.

The part of the brain which controls food cravings is also involved in social engagement, and activating one restrains the other, making us less interested in what is on the plate, the US study on mice by Stanford University found.