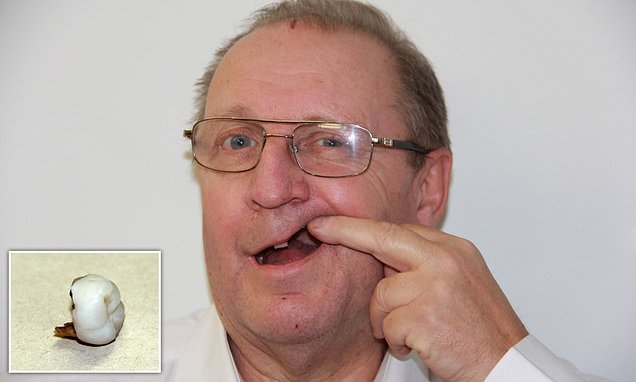 Engineer pulls out own TOOTH with pliers waiting for NHS dentist

An engineer claimed he pulled his own tooth out with pliers after an 18-month long wait for an NHS dentist.

David Woodhouse, 62, said he was left with no option when he was unable to get a spot at his local surgery in Truro, Cornwall.

He had been to the practice for regular check-ups over the years, but had lost his place after returning from work abroad.

Receptionists reportedly told Mr Woodhouse he could only have an emergency appointment if he was in ‘extreme pain’, which he admits he was not.

Some residents of the area have been waiting more than three years to register with a dentists, according to officials. 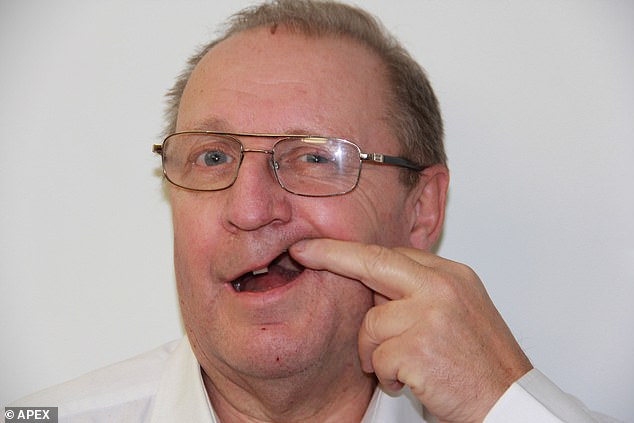 David Woodhouse, 62, said he was left with no option but to remove his own tooth with pliers when he was unable to get a spot at his local surgery in Truro, Cornwall 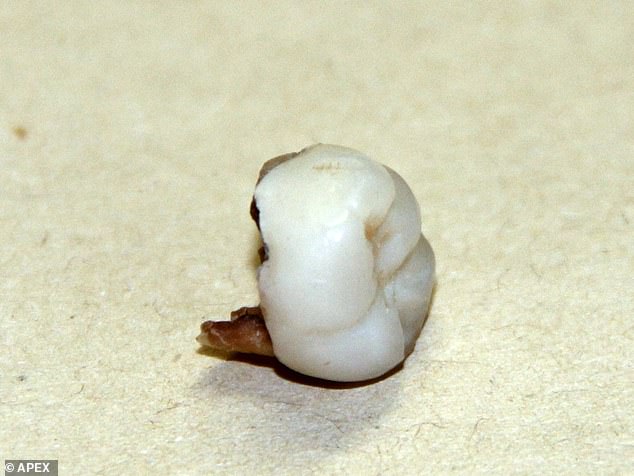 Mr Woodhouse said: ‘I had a loose one and it was causing me a little bit of pain, so I got the needle-nose pliers and out it came.

‘The removal itself was considerably less painful than the long-term pain I was experiencing.’

According to Mr Woodhouse, he had pleaded to see a dentist, and would ‘go anywhere within 100miles’ to do so.

He said: ‘I tried to get an NHS dentist. I went online – nothing. I went on a waiting list – nothing.

RISING NUMBER OF BRITISH CHILDREN IN HOSPITAL WITH ROTTEN TEETH

Growing numbers of children with tooth decay are being admitted to hospital, damning figures show.

More than 26,000 children aged five to nine were taken to hospital in the past year because of rotten teeth, NHS figures in September revealed.

The number has risen for the second year in a row and is more than double the amount of children who needed treatment for tonsillitis.

Experts say the figures are ‘disgraceful’ and have blamed the UK’s sugar obsession for ruining children’s teeth as well as fuelling rising levels of childhood obesity.

This compares to just 12,143 admissions for acute tonsillitis.

And the number of hospital admissions for tooth decay among babies to 19-year-olds has decreased overall from 45,224 to 44,047 in the same period.

The figures even included two children under the age of one.

‘It’s like looking for gold dust. When you go on the waiting list you have to specify three towns, but I would go anywhere within 100 miles of Truro.

‘I would go anywhere within half a day’s drive – I do not care.’

Mr Woodhouse was told at his dentist reception that it would take two days to see an emergency dentist if he was in ‘extreme pain’.

Considering he was not, and with work commitments taking him across the country daily, he decided to do the removal himself.

Mr Woodhouse refused to pay for private care, but is concerned he will need to in the future.

Mr Woodhouse said: ‘I’m not looking forward to the next tooth coming loose, I may have to consider a bank loan to go private, but why should I?

‘I feel so embarrassed as well, it would be nice to eat an apple or a steak again one day.’

Healthwatch Cornwall, the county’s health watchdog, said some people had been waiting more than three years to register with a dentist.

According to NHS England there are more than 48,000 people on the waiting list just in Devon and Cornwall.

A search on the NHS website reveals that just one practice in the Duchy is accepting new patients.

NHS England said: ‘We would encourage anyone with an urgent dental need to contact the emergency dental helpline in Cornwall’.

The spokesman added that about 27,000 people have been placed with NHS dentists in Devon and Cornwall in the past 12 months.

But dentists claim there is a staff shortage, leading to improper care.

Mydentist, which has ten million patients on its books, admitted in July that it did not have enough NHS dentists to carry out check-ups and treatments.

This led to patients with painful infections being prescribed antibiotics, contrary to NHS guidelines, because no dentists are available to undertake treatment.

A recent study found people are so desperate to seek medical help for their teeth that they are going to their GP.

The study calls for dentists to do more to ensure patients in pain can be seen quickly to avoid them visiting the GP instead.

The British Dental Association (BDA) said there was an ’emerging crisis’ in dental care.