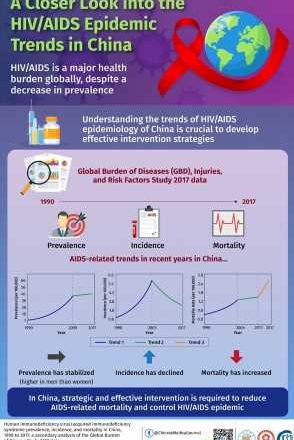 In China, HIV-related deaths are on the rise, despite years of efforts by the government to control them. In an effort to overcome this, a new study published in Chinese Medical Journal dug deep into HIV-related data of nearly 30 years. The findings provide clues and trends that can help policymakers in designing further strategies to curb HIV-related mortality in China. 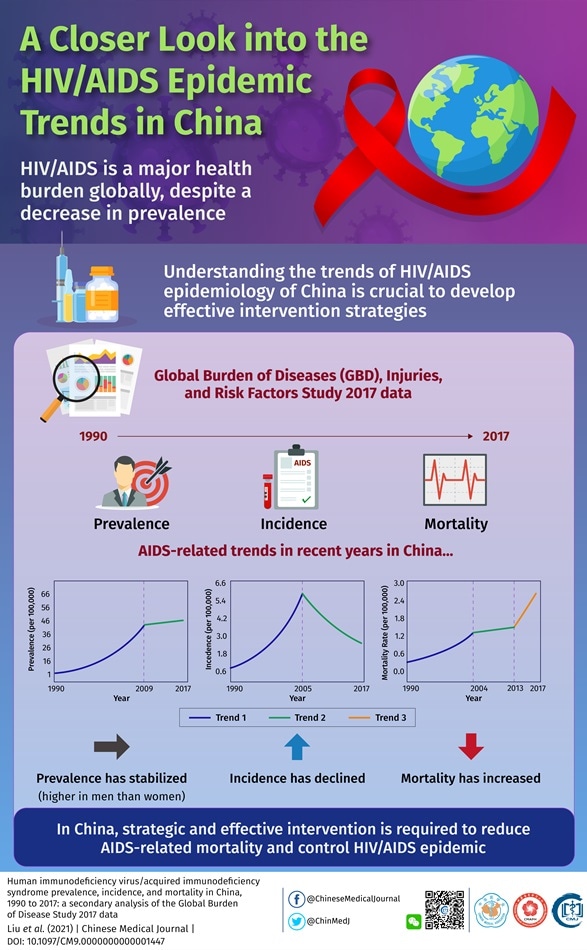 For decades, human immunodeficiency virus (HIV) infections and acquired immunodeficiency syndrome (AIDS) have been a serious health concern globally. Despite various global initiatives to control the spread and clinical advances, including the development of anti-retroviral drugs, the epidemic remains a major public health issue.

In China, as a result of extensive efforts by the national government, HIV cases have declined; however, data have shown that an estimated 1.25 million people were still living with HIV in 2018. Moreover, in 2019, the number of people dying annually from AIDS was five times higher than from all other infectious diseases combined. Thus, to control the burden of HIV/AIDS, it is imperative to revisit the epidemiology of the disease, in order to find trends that can drive effective curbing strategies.

To this end, researchers from the Chinese Center for Disease Control and Prevention, China, and the University of California, USA, have come together to study the trends of HIV/AIDS progression in the country for the past 28 years. The team conducted a detailed analysis on Global Burden of Diseases (GBD), Injuries, and Risk Factors Study 2017 data, focusing on the prevalence, incidence, and mortality-related trends from 1990 to 2017. Briefly, these parameters are calculated by dividing the estimated number of cases, new infections, and deaths, respectively, by the total population and presented as per 100,000, as part of a study published recently in Chinese Medical Journal.

Senior author Prof. Zun-You Wu, corresponding author of the study, explains the common hurdles while working with such epidemiological data, “For a country like China, the data included in GBD often included only the vital registration details. To retrieve other essential information necessary for analysis and take care of the biases that are integral to such data, we applied various epidemiological models and statistical methods. The result was a comprehensive picture of China’s HIV/AIDS scenario that spanned over various demographic groups and subgroups.”

These findings give us a broad picture of HIV/AIDS trends in China. From 1990 to 2017, the total number of HIV/AIDS-related deaths in China increased from 3337 to 34,800. From 1990 to 2009, the country saw a significant increase in HIV/AIDS prevalence, which then remained stable until 2017. The period from 1990 to 2005 was also marked by a similar increase in HIV incidence, which then showed a decline by 2017. However, AIDS-related death rate increased from 1990 to 2004 and, after stabilizing until 2013, rose significantly from 2013 to 2017. During the entire study period, HIV/AIDS prevalence was higher in men than in women.

The reduction of prevalence and incidence of the disease in recent years has highlighted the positive impact of various intervention strategies employed by the Chinese government. However, Prof. Wu shares his concern, “Despite its achievement in battling the epidemic, China is falling short in reducing the HIV-related deaths, especially among men. This points out the need of launching effective strategies to combat the high mortality rates.”

In this study, Prof. Wu and his colleagues shared important insights that can help policymakers to come up with better strategies, such as early identification and diagnosis of people living with HIV and improved treatment that includes high-quality services, monitoring, and support. Additionally, retaining patients throughout the entire treatment period and avoiding treatment drop-off can decrease the mortality rate considerably. The study also highlights need of designing strategies focused on demographically vulnerable and marginalized subgroups.

Overall, Prof. Wu is hopeful about the implications of their findings.

By intensifying the targeted efforts, in coming years China will be able to reduce AIDS-related mortality and control HIV/AIDS epidemic.”