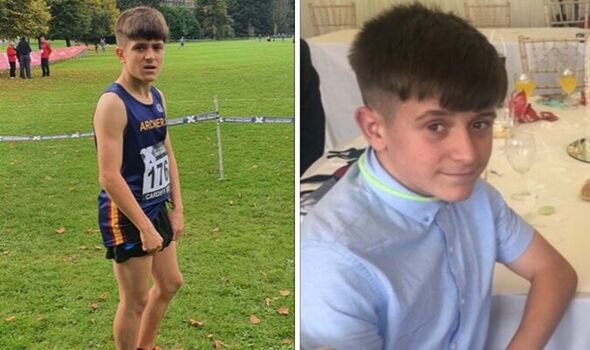 A “young, fit” teenager was struck by a rare and “very aggressive” form of oesophageal cancer in August, just weeks after winning a local two-kilometre race. Today, Ethan Hamer, 14, is undergoing gruelling chemotherapy while his family raise thousands of pounds to pay for a “personalised” cancer vaccine that isn’t available in the UK. Ethan’s mother, Debbie Hamer, spoke to Express.co.uk about her son’s journey.

The money raised will pay for Ethan to have a vaccine called Autologous Tumour Cell from a German clinic. Mrs Hamer said the treatment could “offer Ethan the chance of a normal, long, healthy life”.

She had previously explained to ITV that the vaccine would be created based on Ethan’s specific blood properties, and target all the cancer cells without damaging healthy ones – unlike chemotherapy.

Ethan’s symptoms first showed up in April this year. He started getting “occasional heartburn” when he ate, Mrs Hamer explained.

But the sensation started happening more regularly and reached the point where Ethan was struggling with the symptoms every time he ate.

“He was unable to eat without being in a lot of pain and the majority of the time would vomit,” she said.

Ethan’s GP wrongly believed it was down to heartburn or acid reflux and prescribed medication for this. But the family sought out further help from a gastroenterologist.

The consultant they saw suggested several easily treatable problems with his food pipe, or digestive tract. He booked Ethan in for an endoscopy to figure out exactly what was happening.

An endoscopy is a test that uses a tube with a camera attached to look inside the body.

Mrs Hamer said: “There was no mention of it being a serious issue at this time. The endoscopy was booked in the private clinic for a few weeks time but… whilst waiting for that endoscopy, Ethan deteriorated quite rapidly and was admitted to hospital on August 15.”

Despite the signs of oesophageal cancer becoming clearer, Ethan was set to wait “some weeks” to begin treatment as he needed to have a bone marrow biopsy and an “invasive” lymph node biopsy to confirm the diagnosis.

“We could not wait for the ‘official’ diagnosis as he was deteriorating rapidly therefore it was decided to give him ‘emergency’ chemotherapy as they could not leave him untreated at that stage,” added Mrs Hamer.

“Luckily, the emergency chemotherapy proved to be very positive and he responded very well.”

“Once the biopsy results confirmed the diagnosis his chemotherapy was changed to a different type more suitable to his type of cancer. He continues to have this chemotherapy every three weeks which is keeping him stable.”

The diagnosis left the family devastated and shocked, especially given that Ethan had won the Caerphilly 2K race “weeks” prior.

Cancer in the oesophagus – the tube that carries food from your mouth to your stomach – is extremely rare in children and adolescents.

The highest rates of oesophageal cancer occur in people aged 85 to 89, according to Cancer Research UK.

“We (especially Ethan) have been absolutely overwhelmed with the support and kindness that everyone has given us to be able to give Ethan the chance of extending his life,” Mrs Hamer said.

“Words cannot express our true thanks to every single person who has donated. We will be forever grateful.”

To support Debbie Hamer on her mission, click here to visit her donation page.