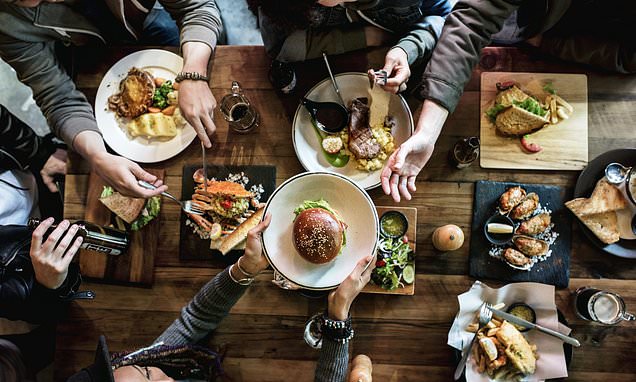 Food allergies don’t have to make meals out a nightmare

Food allergies don’t have to make meals out a nightmare: DR MIKE DILKES reveals five simple steps you can take to cope with the condition

If you are one of the three per cent of the population with a food allergy, you’ll know about it. Symptoms are distinctive, and often debilitating, including a tingling and itchy mouth and throat, hives and swelling around the eyes, lips or tongue.

An allergic reaction happens when the immune system overreacts to a particular food trigger, such as nuts or shellfish.

Each time the trigger is eaten, the immune system detects danger and acts quickly to stop the culprit from entering the body. Chemicals are released in the body, sparking a sometimes extreme reaction. 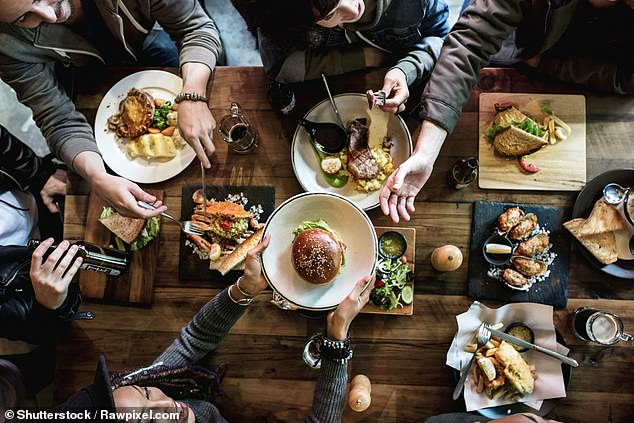 People with allergies can still enjoy a meal out, providing appropriate precautions are taken

Many people may complain of bloating, nausea and headaches after eating some foods – but this is not to be mistaken for an allergy. It’s far more likely these people are suffering an intolerance, the symptoms of which can be painful, and even distressing, but not life-threatening.

Food allergies tend to run in families, and are thought to be caused by genetics. They are more common in children, though most outgrow them when they are past school age.

Referrals to specialist allergy units are hard to come by, leaving many pushed from pillar to post in search of a diagnosis.

But diagnosis is essential – symptoms that are mild on the first reaction can be serious the next time, so there’s no way of telling when a more serious, and perhaps even fatal attack may happen.

My guide below will arm you with the essential information needed to give you the best chance of diagnosis. Then, use my fail-safe, science-backed tips for controlling it, leaving you free to eat in peace.

First, it’s worth considering a list of the most common foods that cause allergies. This includes cow’s milk, eggs, tree nuts – such as almonds, cashews, hazelnuts and walnuts – and peanuts, which aren’t actually a nut but a legume, part of the pea family. Wheat, soy (including soya milk, tofu, and soy found in ready meals and other foods such as beef burgers), fish and shellfish are also common culprits.

Case study: Boy who takes his own cake – and an EpiPen – to parties

Born with a catalogue of severe allergies, including to nuts, eggs and pollen, every social outing is potentially dangerous.

He also suffers from asthma, making sports games with friends challenging, too. 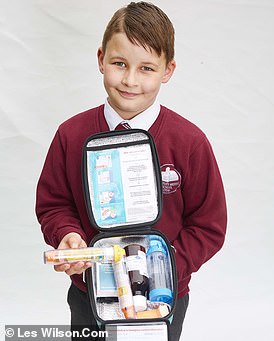 ‘If he’s going somewhere I always make sure he has his EpiPen and a snack with him,’ says his mother Gemma, 29.

Jake’s unfortunate condition is hardly surprising, given his family history. Gemma, from Dorset, has suffered the same allergies all her life.

‘It was pretty miserable growing up,’ she recalls.

‘When out with my friends, I would have to make do with carrot sticks or just not eat at all.’

Now a businesswoman, Gemma says she is still often mistaken for being a picky eater.

‘People think I am making it up because I don’t like certain foods, but I can’t risk eating what the others are. I am anaphylactic to peanuts and, if I eat eggs, I get violently sick.’

But, according to Gemma, Jake is lucky to grow up in a time when we’re more aware of allergies than ever before – a stark contrast to her experience.

She says: ‘It’s much better now than when I was growing up. You can order egg-free cakes – that was never an option when I was younger.

‘If Jake’s going to a party, I’ll speak to the parents beforehand about what food they are serving, and if there’s an issue I’ll bake him a little egg-free cake.’

As for Gemma, her food repertoire has now expanded far beyond carrot sticks and empty plates.

‘I only had my first takeaway curry two years ago and, thankfully, my local chip shop now serves egg-free batter.’

If you or a family member are experiencing reactions like those described above to these or other foodstuffs, keep a detailed note of all flare-ups: every single thing that was eaten around that time, and what happened physically.

Take this list to your GP to help them act quickly and organise the most accurate and appropriate testing. If you do get a referral to a specialist allergy centre, there are two tests the doctors are likely to perform.

First is a skin prick test. During the test, a nurse or doctor will prick a piece of food with a needle then immediately prick it into the skin, usually on the inside of the forearm. After ten minutes, the area is examined for any reaction.

If you are taking allergy drugs like antihistamines or steroids, this test will not work. You need to avoid taking them for a week, if possible.

The other way of testing for food allergy is using a blood test looking for specific immune cells called IgE antibodies which are produced in reaction to individual foods.

It’s often called an allergen specific IgE antibody test. Some GPs may perform this test before making a referral.

To confuse matters, some private clinics offer another type of blood test called total IgE. But these should be avoided, as they are non-specific and not at all helpful.

Some allergy specialists will suggest you try an elimination diet – cutting out the food thought to have caused the allergic reaction before reintroducing it. If the symptoms disappear when the food is withdrawn but return once the food is introduced again, this normally suggests a food allergy or intolerance. It should always be done under supervision of your doctor.

HOW TO COPE WITH FOOD ALLERGIES

Food allergies are relatively straightforward, in a way. You just need to avoid eating what you’re allergic to.

You may have heard about people who are allergic to peanuts having a fatal reaction after having even the most microscopic amount, or even reacting to particles of peanut in the air.

All allergies exist on a spectrum, and these are the most rare, severe cases – and I will address these over the page.

For the vast majority of food allergy sufferers, taking care about what you eat will be enough to avoid discomfort.

1. Eat out, but with caution

People with allergies can still enjoy a meal out, providing appropriate precautions are taken.

It goes without saying that food labels should be read carefully and questions asked. According to the Food Standards Agency, food businesses in the UK (including restaurants, cafes, takeaways and food manufacturers) must tell you if they use common allergens.

But only 14 of the most common allergens are included in this requirement, so if your allergy is very common, you’ll need to ask specific questions. 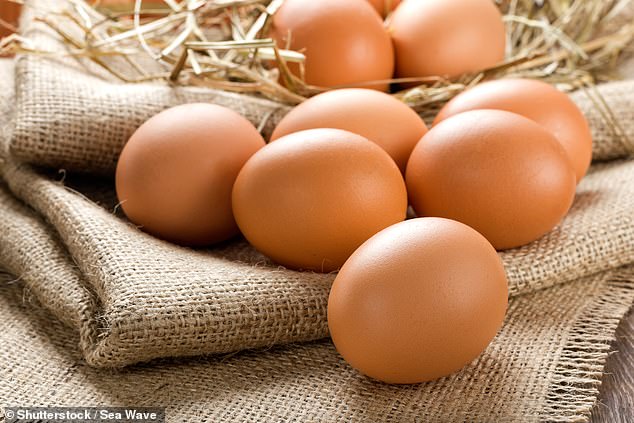 According to the Food Standards Agency, food businesses in the UK must tell you if they use common allergens. But only 14 of the most common allergens (such as eggs) are included in this requirement

On pre-packaged food, phrases such as ‘may contain’ warn customers there could be small amounts of an allergen but this is not a legal requirement.

You can also sign up to alert emails from the Advertising Standards Agency and Allergy UK – both offer a free newsletter about foods that has been withdrawn or recalled because of a labelling problem or food allergy risk.

Did you know? Food allergens can remain on objects like a mobile phone

2. Be wary of red wine and sauerkraut

Some highly allergic people may also experience symptoms with foods they are not technically allergic to. In particular, foods that are high in a chemical called tyramine.

This is because tyramine is a similar compound to histamine, the chemical released by the body that causes allergic symptoms. Although this is not technically an allergy, the symptoms can be distressing for those with severe allergies.

These foods include red wine, fish and fermented foods such as sauerkraut. Allergic people also often react to the chemicals in white, rose and red wines.

In mild to moderate cases, oral antihistamines can help to reduce the affects of a food reaction, should you accidentally eat something you’re allergic to.

These are available from the pharmacist, with stronger doses prescribed by the GP. Some antihistamines, such as alimemazine and promethazine, aren’t suitable for children under the age of two.

If your child is under the age of two and needs medication, discuss with your GP who will advise about antihistamines that are safe for infants.

Avoid mixing antihistamines with alcohol, especially if you’re driving as even non-drowsy types can make some people feel tired. 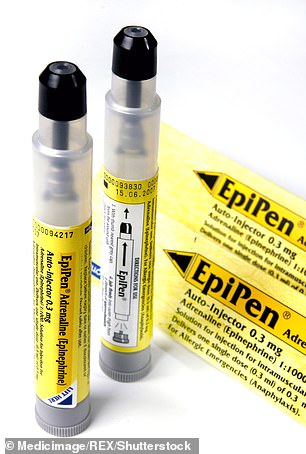 4. You many need to carry an EpiPen

For severe reactions – known as anaphylaxis – a shot of a chemical called adrenaline should be given via an EpiPen or equivalent injector pen.

Adrenaline works by narrowing the blood vessels to counteract the effects of low blood pressure, opening up the airways to help ease breathing difficulties.

5. You’re probably not allergic to gluten

Despite what many believe, there is no such thing as a gluten allergy.

Those who experience symptoms such as bloating, constipation or feeling generally uncomfortable after eating gluten are most likely suffering an intolerance. Here, the body is unable to effectively digest gluten, rather than a fault within the immune system as seen in allergies. It is an important distinction to make to ensure allergic people get the life-saving diagnosis they need.

However there is another condition, called coeliac disease, that does relate directly to gluten.

The immune system is involved here but it is still not an allergy. See the box below for more details about coeliac disease.

Gluten allergy doesn’t exist: So why do so many go gluten free?

It is almost trendy to say that you have ‘a gluten allergy’ these days.

But gluten, a protein in wheat, does not feature on the list of common food allergies. Reactions to wheat are seen, but this is not due to gluten.

There is a different condition called coeliac disease, diagnosed with a specific set of tests.

In coeliac disease – which affects one per cent of Britons – the immune system overreacts to a protein in gluten called gliadin. When eaten, the protein triggers the release of hormones called cytokines which lead to damage in the bowel. 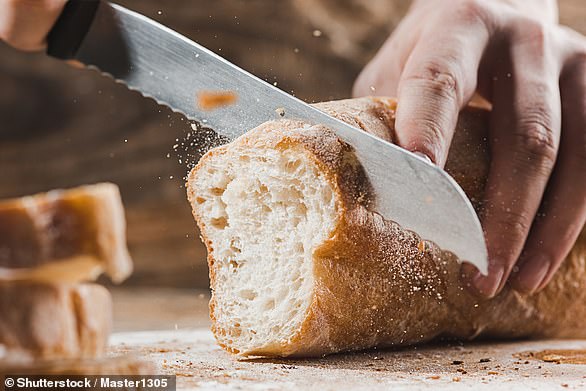 If left untreated, it can cause holes and increases the risk of bowel cancer. But this is not an allergy.

If you experience persistent and severe digestive problems after eating wheat, ask your GP to be tested for coeliac disease.

So why are so many people suddenly avoiding gluten?

Some people do say they experience uncomfortable digestive symptoms such as bloating, gas and constipation when they eat foods containing gluten.

Experts are yet to understand exactly why this happens, but have coined the phenomenon ‘non-specific gluten sensitivity’.

However scientists are still unsure if gluten is the culprit here. Many foods that contain gluten, and trigger symptoms, contain other ingredients that are also known to cause stomach upsets.

This is not an allergy either, but most likely a fault within the individual’s digestive system.