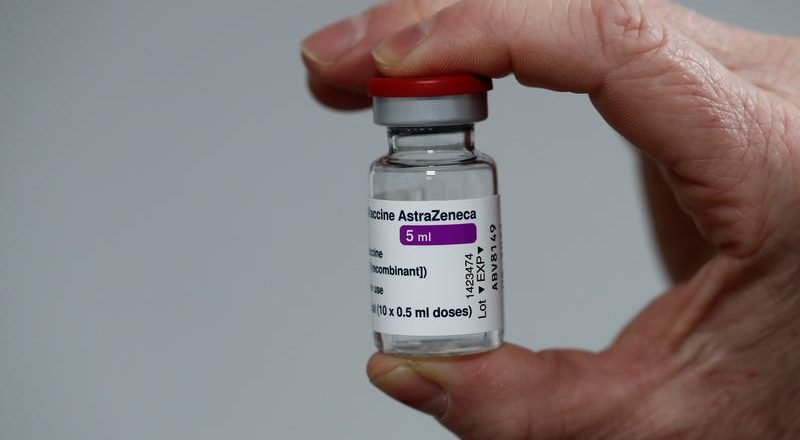 France recommends AstraZeneca for over-55s only, departing from EU guidance

PARIS (Reuters) – France’s medical regulator approved the resumed use of AstraZeneca’s COVID-19 vaccine on Friday, but said it should be given only to people aged 55 and older.

FILE PHOTO: A vial of the AstraZeneca COVID-19 vaccine is seen in a pharmacy in Paris as part of the coronavirus disease (COVID-19) vaccination campaign in France, March 19, 2021. REUTERS/Benoit Tessier

The restriction breaks with the European watchdog’s guidance that the shot is safe for all age groups, and comes just weeks after Paris initially said the Anglo-Swedish vaccine should be used only on people under 65.

The European Medicines Agency said on Thursday it was convinced the benefits of the AstraZeneca vaccine outweighed the risks after reports of rare instances of blood clotting.

The recommendation from the National Authority for Health (HAS) reflected signs that the clotting affected younger people mostly, whose risk of dying from COVID-19 was lower than the elderly.

“Given the data provided by the EMA, it is the HAS’s belief that vaccination with the AstraZeneca vaccine can resume immediately,” the French regulator said in a statement.

“However, the EMA has identified a possible increased risk of (thrombosis) in people under 55 years old. The HAS recommends using the AstraZeneca vaccine at this stage only for people aged 55 and over, who represent the majority of priority people.”

An EMA review covering 20 million people in the UK and the European Economic Area, which links 30 European countries, included seven cases of blood clots in multiple blood vessels and 18 cases of a rare condition that is difficult to treat called cerebral venous sinus thrombosis (CVST).

France was one of more than a dozen European Union states that suspended use of the Anglo-Swedish vaccine this week.

The HAS said it would review its opinion soon as new data came in. Guidance would also be given soon to those under 55 who have already received a first dose of AstraZeneca, it added.

The new restrictions add yet another complication to France’s troubled vaccination rollout, which has been beset by onerous red tape, supply difficulties and a high level of public mistrust.

France has so far delivered 5.7 million first doses – roughly 8% of the population – compared with more than 25 million in Britain and more than 100 million in the United States.

When France first approved use of the AstraZeneca shot in early February, it said it should be only for under 65s, with President Emmanuel Macron calling it “quasi-ineffective” for anyone beyond their mid-60s.

France only removed that restriction this month.