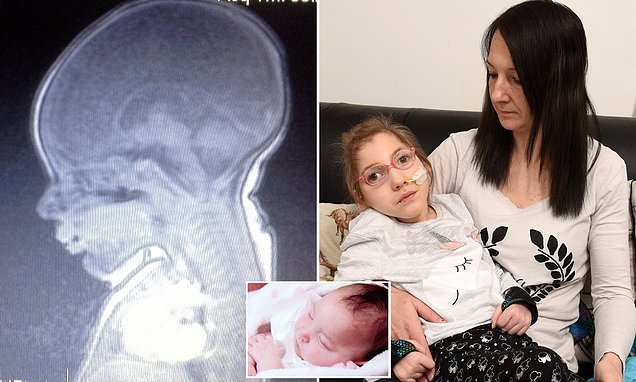 Six-year-old girl born with half of her BRAIN missing because of a rare condition ‘that kills most sufferers by the age of one and only affects one in 250,000’

A girl who was born with half her brain missing has defied doctors by living to reach the age of six.

Lily Wetherall was expected to die a few months after birth and was sent home from hospital to enjoy the little time she had left with her family.

She had appeared normal at birth, but was diagnosed with hydranencephaly after brain scans.

The condition occurs when the brain’s cerebral hemispheres – large parts of its solid tissue – are missing and replaced with fluid.

Parents Sienna King, 37, and Anthony Wetherall, 31, from Aylesbury, Buckinghamshire, were told their daughter was blind and deaf and would soon become ‘incompatible with life’.

But, remarkably, Lily has beaten the odds and is able to recognise her relatives, smile, stand up and even go to school twice a week. 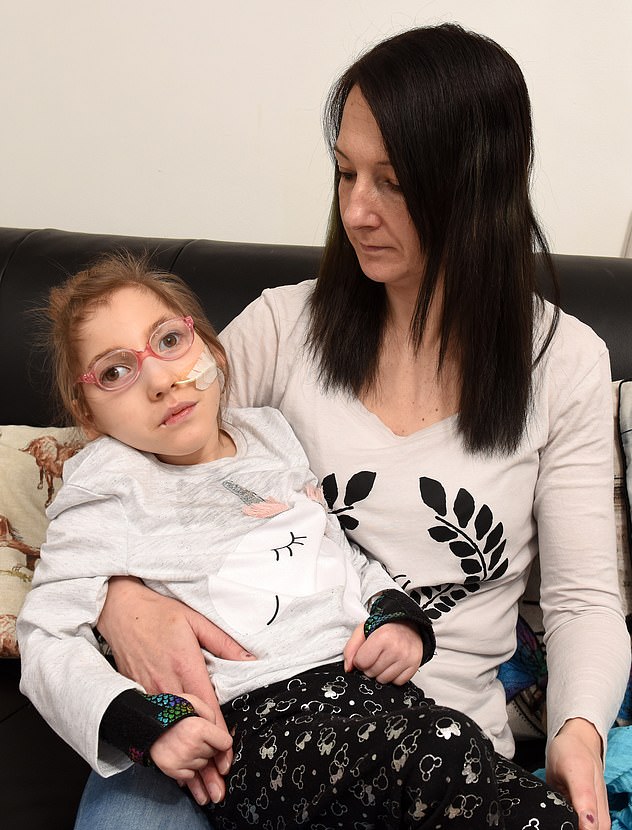 Lily Wetherall was born with half her brain missing but has defied doctors by living till the age of six when they expected her to die after a few months. Pictured with her mother, Sienna King 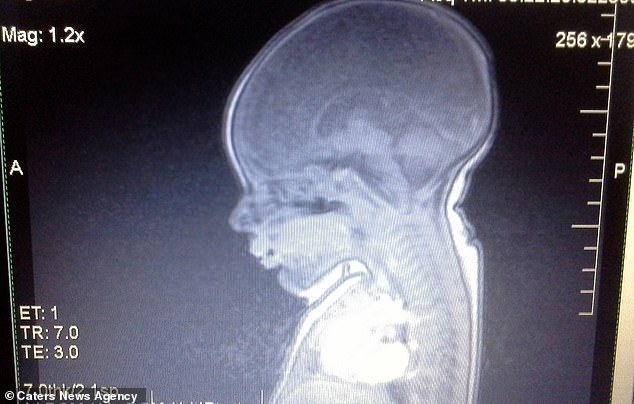 Lily appeared normal at birth, but was diagnosed with hydranencephaly after brain scans (pictured). The condition occurs when the brain’s cerebral hemispheres are absent and replaced with brain and spinal fluid 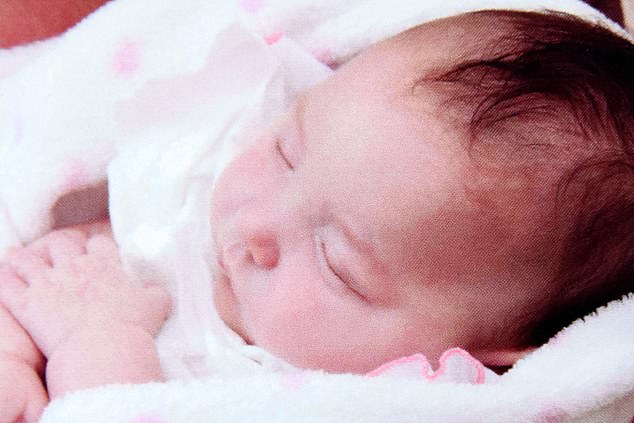 Ms King had an emergency caesarean section to have Lily (pictured) after her twin, Paige, died in the womb – although it is not clear why

Ms King said: ‘They told us she wouldn’t be able to move, and I have pictures of her holding herself up.

‘She has made it past six birthdays, she has stood up by herself, and smiles every day.’

Ms King had originally been pregnant with twins, but her other girl Paige died in the womb.

It is not clear why Paige died, but medics at Stoke Mandeville Hospital in Buckinghamshire rushed to save Lily, the surviving twin, by performing an emergency caesarean section three weeks before the twins’ original due date.

Ms King, who is Lily’s full time carer, said: ‘When Lily was born, she didn’t open her eyes once for a week, I wish we had listened to our gut that told us it was a red flag.

‘I didn’t hear her cry for two weeks. We just sat looking at this tiny thing in an incubator.’

Doctors said that Lily was deaf and blind, but it wasn’t until a month later that they discovered why.

Ms King and Mr Wetherall, a tree surgeon, claim they were due to take Lily home from hospital before medics allegedly said they had forgotten to complete a brain scan.

‘We were discharged one month after her birth and we thought we were over the worst,’ Ms King said.

‘But as we were walking out, a nurse ran after us and told us she was sorry but they had forgotten to complete a brain scan.

‘The minute the doctors came back to speak to us after the scan, they said they were sorry but it wasn’t good. 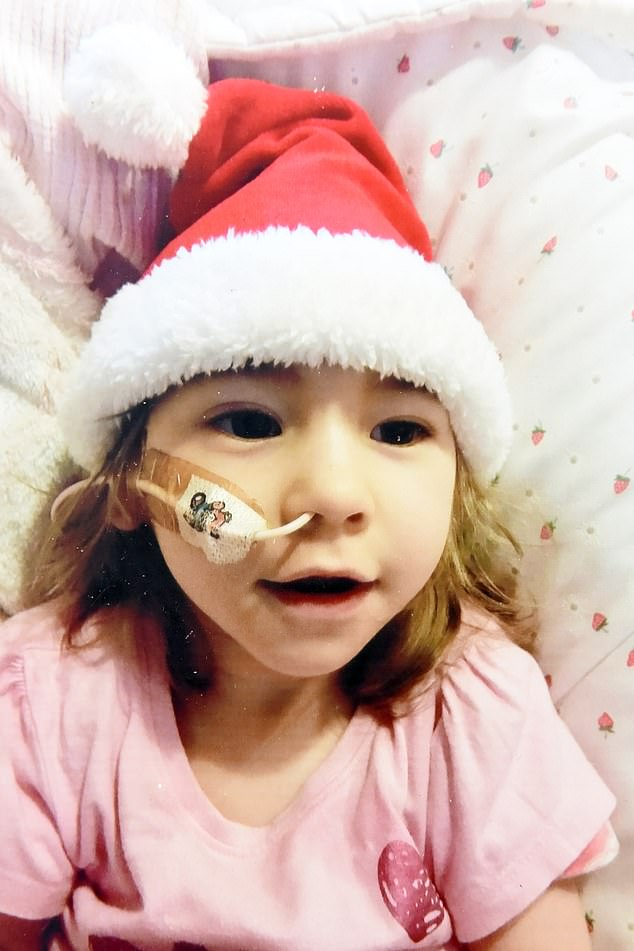 When Lily was born, she didn’t open her eyes for a week. Doctors believed she was blind and deaf but didn’t discover why for a few weeks (Pictured: Lily as a toddler) 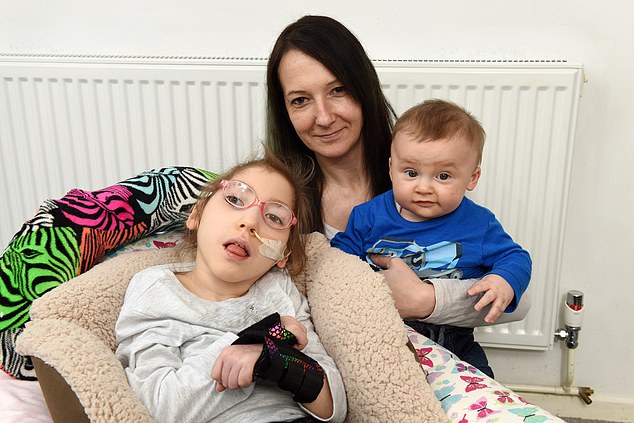 Ms King, pictured with Lily and her son, Riley, at their home in Aylesbury, Buckinghamshire, were told her daughter was blind and deaf at birth 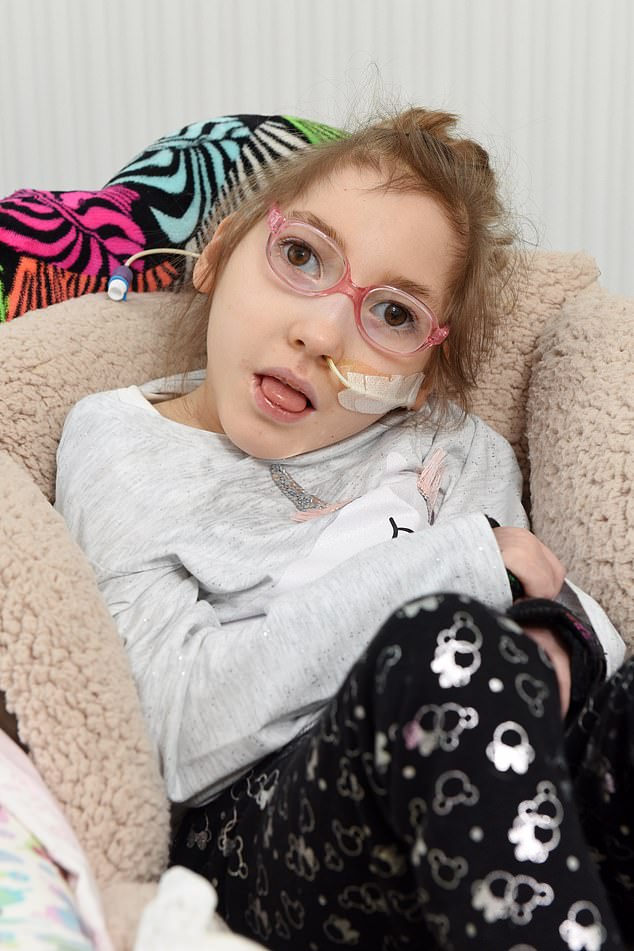 Doctors said Lily would be ‘incompatible with life’. But Ms King said she proves them wrong every day because she is able to move and has sat and stood up before

‘No-one at the hospital had ever seen anything like it. She has a brain stem, but she doesn’t have a brain, her brain scan just shows as a mass of fluid.

‘Doctors told us she would never be able to talk, move, show emotion, recognise anyone, and we only had a few months before we would lose her.’

Hydranencephaly is a rare condition in which a child is born with most of the brain’s solid tissue – its cerebrum – missing.

Instead, where most people have the folded tissue you imagine when picturing a brain, children with this condition have a sac of fluid.

This means parts of the brain which control vision, object recognition, language, speech, logic and muscle movements may all be damaged or missing completely.

An infant with hydranencephaly may look normal at birth but serious problems might become obvious as it grows.

The disorder can cause seizures, muscle stiffness, breathing problems, slow growth and intellectual development, and blindness or deafness.

Hydranencephaly is incurable and can be caused by genetic disorders or disruption to blood supply during an embryo’s development.

The condition affects around one in every 250,000 newborns, according to US charity the Brayden Alexander Global Foundation for Hydranencephaly.

Prognosis for children affected by the illness is poor – most die before birth or as infants, although some may survive for several years.

Those who do survive will likely be affected by serious intellectual and physical disability.

Common causes of death for children with hydranencephaly are major seizures, failure of the organs and body tissues to grow, and lung infections or breathing difficulties which may be worsened by weak or paralysed chest muscles.

Source: National Institute of Neurological Disorders and Stroke and the Italian Journal of Pediatrics

A child with hydranencephaly may appear normal at birth, but the condition means a large part of the brain is missing.

Doctors believe the cause of Lily’s condition is her brain being starved of blood and oxygen before she was born, potentially because of a clot.

Instead of having the cerebrum – the biggest part of the brain – there is a sac filled with brain and spinal fluid called cerebrospinal fluid.

Scans show she still has the brain stem, which controls breathing and vital bodily functions, and the cerebellum, responsible for muscle movements.

The cerebrum contains the frontal lobe, occipital lobe, parietal lobe and temporal lobe, which control a huge list of functions from emotions, sense of touch, memory, speech and body movements.

This leaves those effected –  approximately one in every 250,000 according to the Brayden Alexander Global Foundation for Hydranencephaly – with a vast range of symptoms.

Generally these include vision difficulties, intellectual disability and increased muscle tone and reflexes.

Poor body temperature and blood pressure regulation, failure to grow at a normal rate, and drug resistant seizures are symptoms that often cause death in patients.

Many with the disorder die before the age of one and there is no treatment.

In rare cases, such as Lily’s, they may survive for several years or more.

Ms King said: ‘They told us to take her home and enjoy the time we had left with her, because having no brain meant she was incompatible with life and she didn’t have long to live.

‘We had already lost Paige, so for them to tell us we were going to have to bury our other child was like a sick joke.

‘We were told that she would never be able to see, would be deaf, wouldn’t be able to move, speak or show any emotion.

‘They also said she would only be here for a few months.’

But she says Lily has come on leaps and bounds since she was a baby.

Ms King said: ‘I really hate that phrase, my daughter is not “incompatible with life” – she proves that [wrong] every day.

‘Now, six years on, she has celebrated every birthday, can partially see, hear, and she knows who her mum and dad are, constantly smiling.

‘As she has grown up, she has become a little girl – she has a personality and if you’re with her every day you can see it. 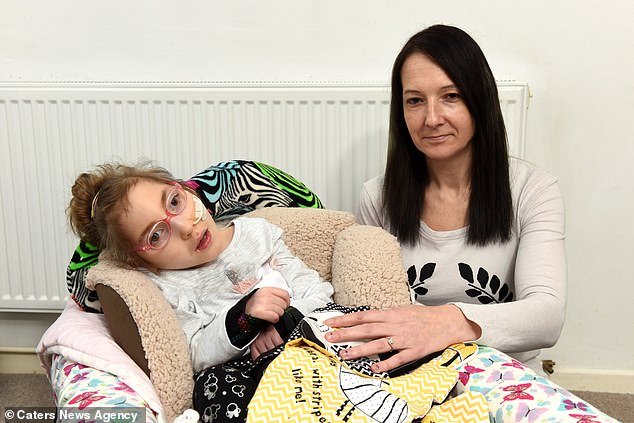 Ms King claims ‘tactless’ nurses left her in wards with mothers with newborn twins who told her to ‘cheer up’ because she had one healthy child (Lily, pictured) after the birth 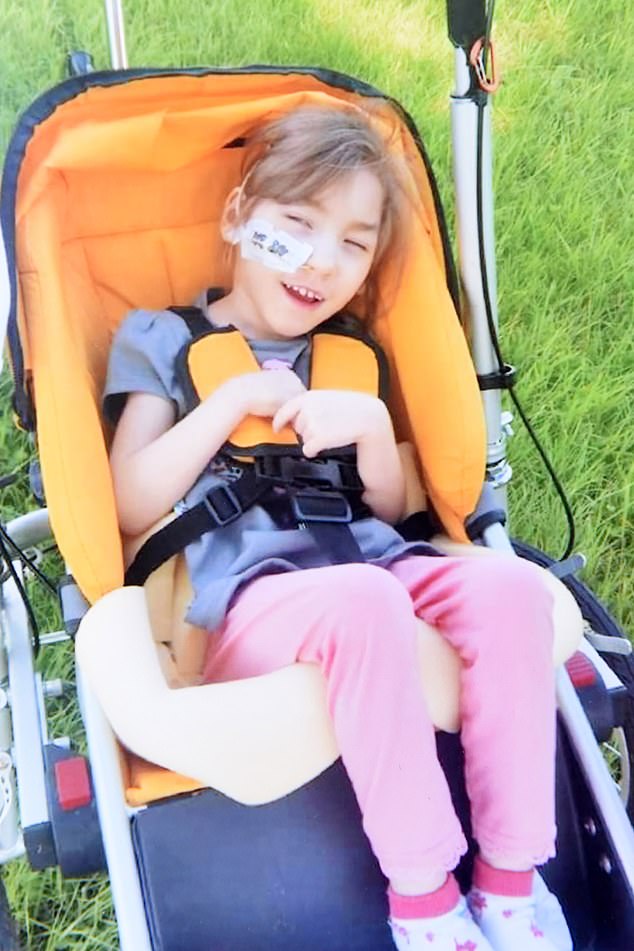 Ms King said: ‘They told us to take her home and enjoy the time we had left with her’

‘When Anthony comes home, she excitedly waits for him to come over and say hello to her, she knows who mum and dad are.

‘Every day we see her personality grow, she’s a proper little girl, and she even goes to school twice a week.’

The family were able to get a special bed for Lily with the help of a charity called New Life, which donated £7,000 through a community outreach programme.

Ms King said: ‘New Life and our community have been amazing; they’ve provided us with equipment to give Lily the best quality of life possible and we could not be more appreciative of that. 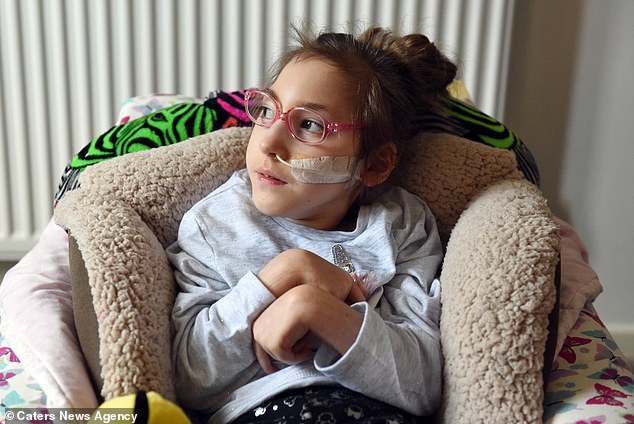 Ms King said they have seen Lily’s personality grow and she is even able to go to school. Pictured: Lily at home recently 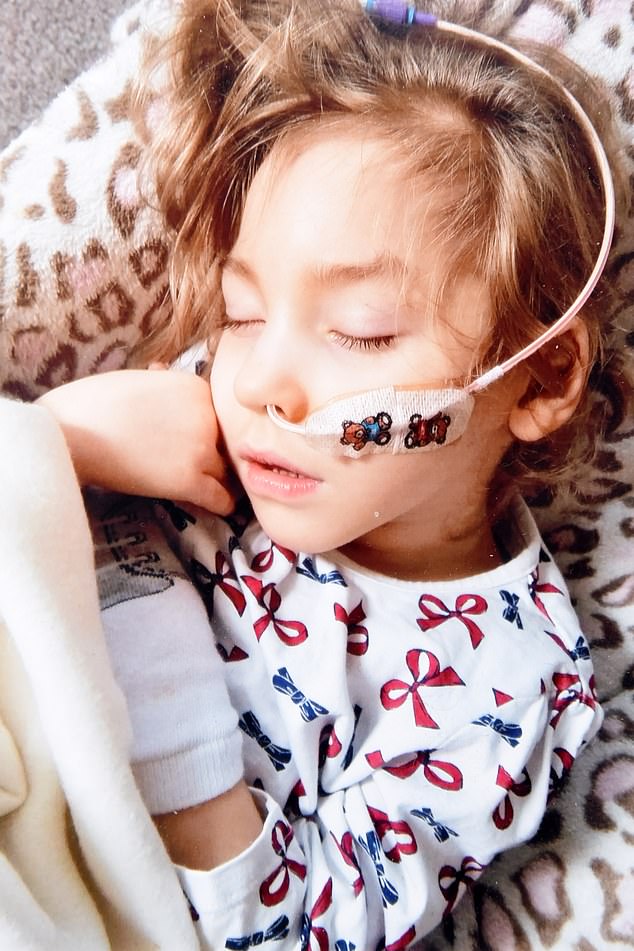 Doctors said Lily would never be able to talk, move, show emotion or recognise anyone. However, Ms King said Lily can do these things

‘Lily shows us every day that she’s fighting, so we fight with her, and we will never give up on providing her with the fullest life we can.

‘As a mother, watching her battle through this with such bravery is what gives me mine.’

Tina Kenny, medical director of Buckinghamshire Healthcare NHS Trust, which runs Stoke Mandeville Hospital, said: ‘We would like to offer our sincere condolences to Ms King for the sad loss of her daughter [Paige].

‘Although we can’t comment on individual cases, we would be happy to have a meeting with Ms King to discuss her experience.

‘The Trust is dedicated to ensuring that families affected by the loss of a child or a child born with a disability are cared for and supported with compassion and sensitivity and that appropriate information and counselling is provided.’