Home » Health News » In Some States, Voters Will Get to Decide the Future of Abortion Rights 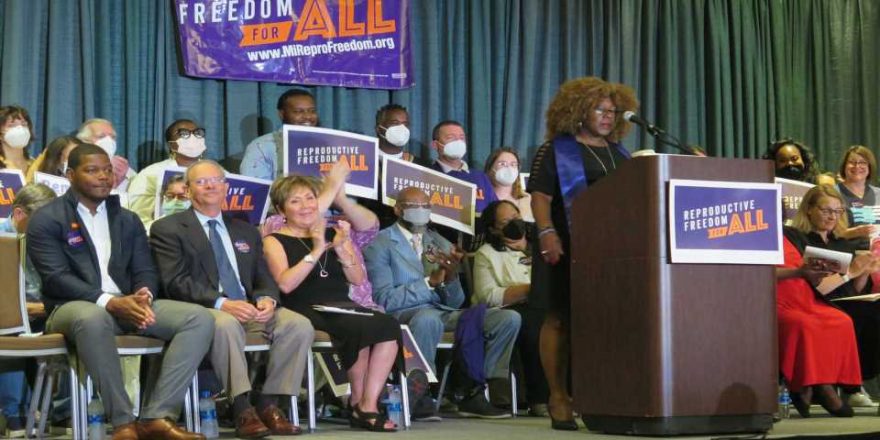 In Some States, Voters Will Get to Decide the Future of Abortion Rights

As states grapple with the future of abortion in the U.S., Michigan, California, and Vermont could become the first states to let voters decide whether the right to abortion should be written into the state constitution.

In Michigan, a proposed constitutional amendment would override a 90-year-old state law that makes abortion a felony even in cases of rape or incest. The U.S. Supreme Court’s overturning of Roe v. Wade last month could revive that abortion ban — and has galvanized abortion-rights advocates to secure new protections.

Some of the momentum is coming from activists getting involved for the first time.

“I wanted to do something, but I had no political experience or really any experience in activism,” said Amanda Mazur, who lives in rural northwestern Michigan. “But I thought, ‘Maybe I can volunteer and just offer something tangible to the movement.’”

Michigan organizers like Mazur submitted more than 750,000 signatures — a record number, they said — to state election officials in hopes of having the amendment appear on the November ballot.

If just over half those signatures are validated, Michigan voters will decide whether to amend the state’s constitution to guarantee broad individual rights to “reproductive freedom” that would cover abortion, contraception, and fertility treatments. It would also prevent the state from regulating abortions later in pregnancy if the patient’s “physical or mental health” is at risk.

The ballot initiative has the backing of medical groups like the American College of Obstetricians and Gynecologists, while conservative groups have called it radical and dangerous, claiming it would “allow late-term abortions for practically any reason.”

In California, the push to expand abortion access starts from a very different vantage point: The right to abortion is protected in state statute. And voters will be asked whether they want to enshrine it in the constitution. Proposition 1, which will be on the ballot in November, would prohibit the state from interfering with Californians’ reproductive health decisions, including those related to abortion or contraception.

“I want to know for sure that that right is protected,” state Sen. Toni Atkins (D-San Diego), the Democratic leader in the Senate and lead author of the amendment, said at a legislative hearing in June. “We are protecting ourselves from future courts and future politicians.”

The amendment is one strategy that several California lawmakers are pursuing to protect abortion access in the state. Gov. Gavin Newsom, a Democrat, has signed legislation to eliminate out-of-pocket expenses for abortion for most Californians and to protect California providers that offer abortion services from lawsuits in other states. The recent state budget deal also includes $200 million for reproductive and abortion care.

Earlier this month, Vermont Gov. Phil Scott, a Republican, announced that Proposal 5 will be on the November ballot. He said in a statement: “In Vermont, we solidified the right to choose in law, and now Vermonters have the opportunity to further protect that right in our constitution.”

For Mazur, the desire to “do something” started in 2017, when she and her husband gave their daughter, then 2 years old, some happy news: She was going to be a big sister. The family was thrilled.

But then doctors told Mazur something was wrong.

“I found out halfway through the pregnancy that the baby my husband and I hoped for suffered from a rare and life-limiting genetic condition,” Mazur said. “We ultimately made the compassionate choice to end the pregnancy for my well-being, and for the well-being of our family, and the life of what we thought would be our child.”

Devastated, Mazur turned to a national online support group and met people having similar experiences. But many group members said they were having a tough time finding a way to terminate their pregnancies.

“It really broke my heart that you’re going through this already devastating experience but have to travel far away from your home across the country … [and] advocate for yourself like crazy just to get care that you have decided with your doctor is best for you,” Mazur said.

At the time, abortion rights in Michigan seemed pretty stable, but Mazur’s political awakening found an outlet this year.

Reproductive Freedom for All, a petition group backed by the American Civil Liberties Union of Michigan and Planned Parenthood Advocates of Michigan, was gathering signatures for the constitutional amendment to enshrine abortion protections in state law. The effort took on new urgency in May after a draft of the Supreme Court’s decision in Dobbs v. Jackson Women’s Health Organization was leaked and then published.

“Folks realized that this big, scary thing that they did not think would happen might actually happen,” said Jessica Ayoub, a field organizer with the ACLU of Michigan.

Some Michiganders were registering to vote just to be eligible to sign the petition. Jaynie Hoerauf, a 62-year-old attorney in Farwell, drove 40 miles to attend a rally where she knew she could sign it.

“A bunch of us were so ticked off [about Roe being overturned], and we were talking about it. And I was like, ‘I’m just going to go on and find where I can sign the stupid petition,’” Hoerauf said.

Activists on both sides of the abortion-rights debate expect to spend millions of dollars. They predict that donations will pour in from outside Michigan and that voters in other states will be watching.

“This is just the start of our fight,” Ayoub said. “We know that it is a long road to November.”

This story is part of a partnership that includes Michigan Radio, NPR, and KHN.