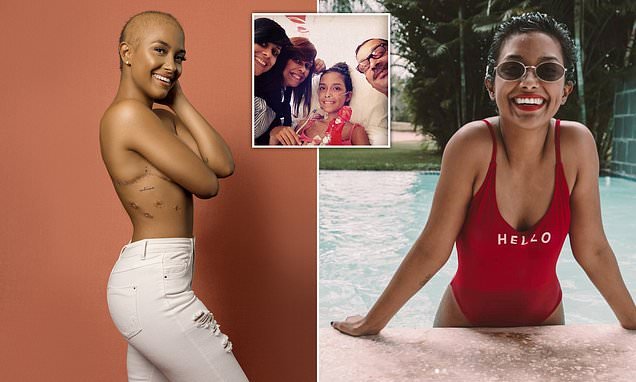 Lawyer whose dramatic weight loss, anaemia and cough was dismissed as everything from ‘bad flu’ to arthritis for TWO YEARS is finally diagnosed with blood cancer

A lawyer whose crippling symptoms were dismissed as just ‘bad flu’ for two years was finally diagnosed with blood cancer.

Over the next two years, the teenager was diagnosed with everything from arthritis to dermatitis, and prescribed a series of cream, cough syrups and iron tablets.

When these failed to ease her suffering, an X-ray finally revealed a large tumour on Ms Lora-Cabán’s right lung and she was diagnosed with stage four diffuse large b-cell lymphoma.

After coughing up blood, Ms Lora-Cabán was rushed for emergency surgery to remove half of her lung, before going on to endure chemotherapy and having her lungs drained three times.

When she relapsed for a third time last year, doctors warned the now 24-year-old they could only buy her more time.

But two months ago, Ms Lora-Cabán surprised everyone when she made a ‘miraculous’ recovery and now only goes to hospital for check-ups every two months. 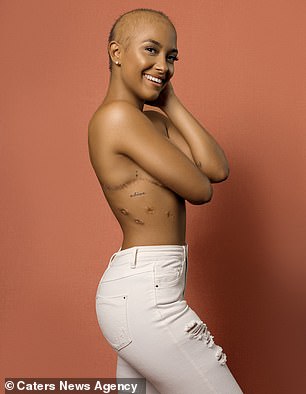 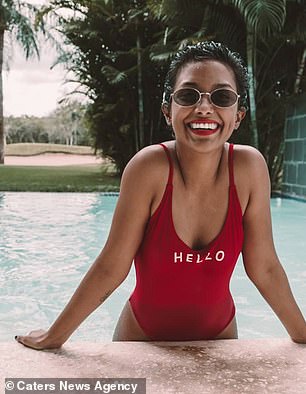 Karla Lora-Cabán’s anaemia and nasty cough was dismissed as ‘bad flu’ and arthritis for two years before she was diagnosed with blood cancer. She is pictured left showing off her scars from surgery to remove half of her right lung – which had a large tumour – shortly before she relapsed for a second time. She is pictured right this year after making a ‘miraculous recovery’ 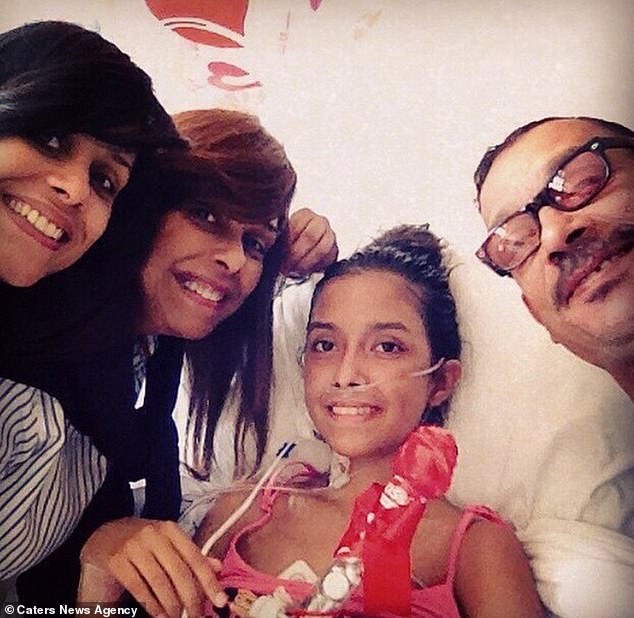 After she was diagnosed, Ms Lora-Cabán was rushed to emergency surgery when she started coughing up blood. She is pictured after the operation during a three-month stint in intensive care, surrounded by her loved ones. The ordeal also caused her to spend ten days in a coma

Speaking of when she first became unwell, Ms Lora-Cabán said: ‘I attributed all of my symptoms to other things, which is why these types of cancer are so hard to diagnose.

‘When I started coughing really badly, given my asthma and anaemia, I didn’t pay much attention to it, thinking it was merely bad flu.

‘The cough became worse and with chest pains, along with the weight loss came night sweats, skin rashes and sporadic fevers.

‘I was told the chest pain was arthritis and prescribed a cough syrup, then for the rash was told it was dermatitis and giving topical cortisone, and then given iron for my anaemia.

‘No doctors could tell me what was going wrong with me, so I continued to get worse and worse.’

After finally being diagnosed with blood cancer, things took a dramatic turn for the worse when Ms Lora-Cabán began coughing up blood.

‘I was rushed-in for emergency surgery, which resulted in the removal of half of my lung, two surgeries, ten days in a coma and a three month stay in ICU,’ she said.

Although doctors were initially optimistic Ms Lora-Cabán may be on the mend, she then relapsed again.

‘I was given a trach, chemo and treatment for anaemia, high acid uric levels and kidney treatments.

‘My body hadn’t responded well to treatment and I had never been N.E.D – no evidence of disease.’

Thinking a cure was out of the question, doctors focused on improving Ms Lora-Cabán’s quality of life.

And the lawyer even wrote goodbye letters to her loved ones.

But – out of nowhere – Ms Lora-Cabán was told she had beaten the disease at the end of last year.

‘As of now, I am miraculously cancer free for the first time in four years and doctors are not sure why,’ she said.

‘Being diagnosed at stage four and with many complications my doctor never thought i would get past my first chemotherapy.

‘But here I am, three relapses later, outliving my prognosis.’ 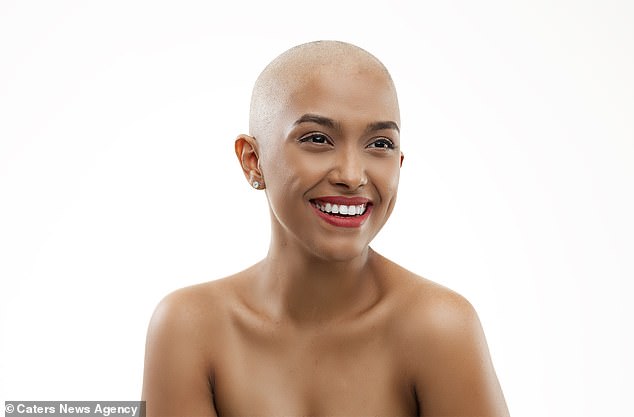 When Ms Lora-Cabán relapsed for a third time last year, doctors warned her disease is incurable and they could only buy her more time. But two months ago, results revealed the lawyer is ‘cancer free’. She is pictured after shaving her head to cope with chemo’s side effects 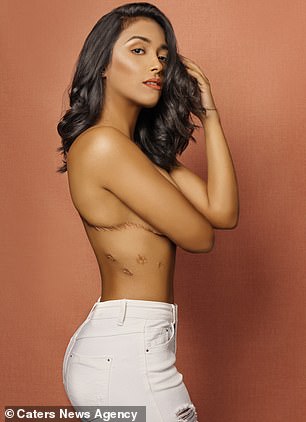 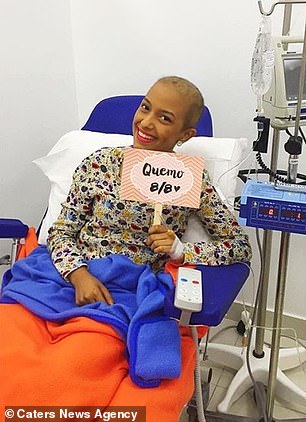 The previously self-conscious Ms Lora-Cabán sometimes wears a wig to cover up her hair loss (left). She is pictured right in hospital having chemo in a long journey towards being healthy 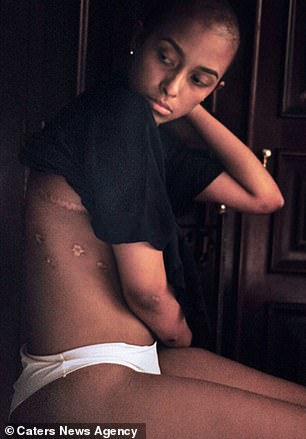 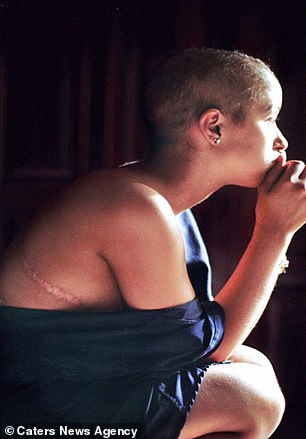 After writing goodbye letters to her loved ones, Ms Lora-Cabán finally feels positive about the future. She is pictured left and right showing off her surgery scars

Ms Lora-Cabán credits her positive mindset for helping her cope with her disease, even when she relapsed three times.

While on online support groups, she met her boyfriend Lorenz Dries, 30, from Antwerp, Belgium, who has fought off both bone cancer and leukaemia.

After speaking to one another for several years after Ms Lora-Cabán was diagnosed, he flew to Santo Domingo to meet her and helped her battle through her second relapse.

‘We realised how similar our life perspectives are, the way we feel and see the world after the big C is very similar,’ she said.

Mr Dries – a YouTube and Vlogger – added: ‘At times you feel like the whole world around doesn’t understand you, but I felt we did due to going through cancer.

‘All of the sudden you’re at the bottom of the barrel, people look at you as a cancer patient, like you’re weak and a sick entity, which can be hard.’

‘Even though I have a huge facial scar, it’s less bad for a man than a woman the way our society is built in a superficial sense to judge women by way they look,’ he said.

‘She was able to help me with many of my insecurities, self-doubts and low moments, we can relate to each other on a whole other level.

‘I definitely feel we were very lucky to come into each other’s lives when we did.’

The couple hope to travel the world together as inspirational public speakers.

‘I love the connection we have, how we can express our feelings and emotions and sometimes irrational fears with each other,’ Ms Lora-Cabán said.

‘We are more aware of what each other is going through and we know how the other one feels because we have been through the same.’ 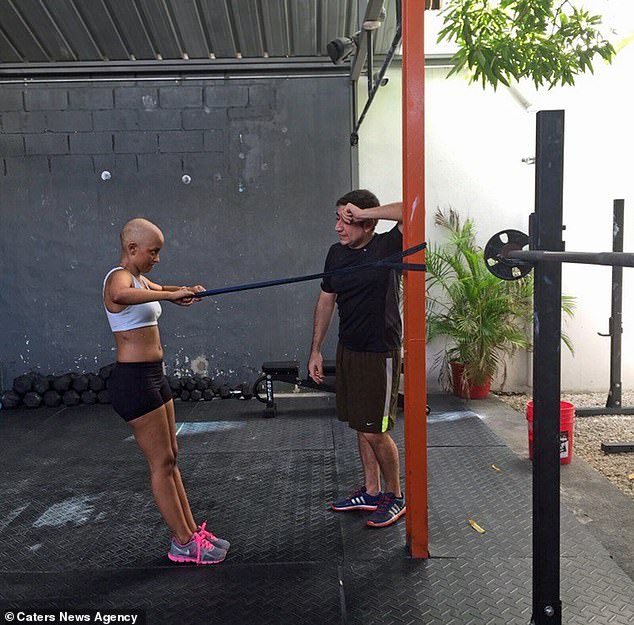 Even while she battled cancer, Ms Lora-Cabán stayed fit and even ran her first marathon 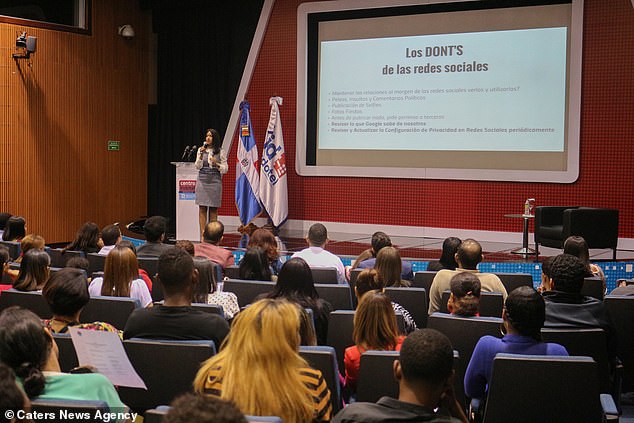 Pictured giving a talk about her ordeal, Ms Lora-Cabán hopes to become an inspirational public speaker and travel around the world with her fellow cancer-beating boyfriend

Lymphoma is a cancer of the lymph nodes, which is the body’s disease-fighting network.

That network consists of the spleen, bone marrow, lymph nodes and thymus gland.

There are various types of lymphoma, but two main ones: non-Hodgkin’s and Hodgkin’s.

Both have much better prognoses than many types of cancer.

WHAT IS HODGKIN’S LYMPHOMA?

Hodgkin’s lymphoma is a type of cancer that starts in the white blood cells. It is named after Thomas Hodgkin, an English doctor who first identified the disease in 1832.

The survival rates are much more favorable than most other cancers.

Non-Hodgkin lymphoma can occur anywhere in the body but is usually first noticed in the lymph nodes around sufferers’ necks.

Non-Hodgkin’s lymphoma affects around 13,700 new people every year in the UK. In the US, more than 74,600 people are diagnosed annually.

It is more common in males than females, and it is commonly diagnosed either in a patient’s early 20s or after the age of 55.

Survival can vary widely with NHL.

The general survival rate for five years is 70 percent, and the chance of living 10 years is approximately 60 percent.

It depends on the number and locations of the body affected by Non-Hodgkin lymphoma.