Man with terminal cancer is fundraising £140,000 for private treatment

Terminally ill man’s wife launches desperate appeal to help her raise £140,000 for private cancer treatment that will buy him more time with their twins

A woman whose husband has terminal cancer is appealing to the public to help her raise £140,000 for treatment that will buy him more time with their twins.

Lisa Dipper’s husband Nick Dipper, 51, was diagnosed with nasopharyngeal carcinoma on June 21 last year, which affects the part of the throat that connects the nose to the back of the mouth.

Doctors initially dismissed his headaches as just sinusitis and prescribed him a string of antibiotics.

But when Mr Dipper – a project manager – ‘rapidly’ lost 21lbs (1.5st), medics carried out a biopsy, which revealed his disease.

Mr Dipper – of Henley-on-Thames, Oxfordshire – then endured eight rounds of chemo and 30 cycles of radiotherapy, which left him unable to speak, with no sense of taste, and ‘literally burnt inside and out’.

The couple thought the worse was over when Mr Dipper was given the all-clear in January, only for a scan weeks later to reveal the cancer had spread to his bones, liver and lungs.

With the NHS just offering palliative care, Mrs Dipper, 37, is appealing for the public to donate £140,000 for her husband to have private immunotherapy, which boosts the body’s defences to fight cancer. 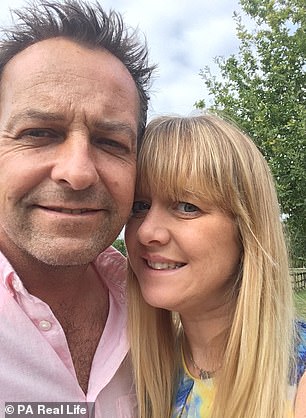 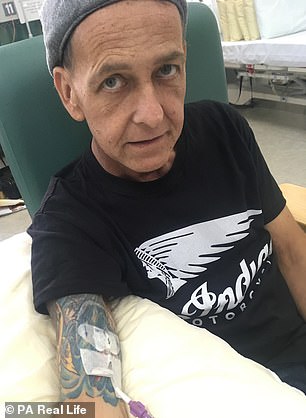 Nick Dipper (pictured left with his wife Lisa) has terminal cancer, with NHS doctors being told they can only offer palliative care. The father is pictured right enduring one of his eight rounds of chemotherapy in February last year, which left him barely unable to speak or swallow

Speaking of her husband’s condition, Mrs Dipper said: ‘After everything we’ve been through, I can’t bear the thought of being without Nick and bringing up the boys alone.’

‘Right now, we feel as if we’ve been sent to war with no weapons – but I am willing to do whatever it takes.

‘Any extra time we manage to buy with Nick, I’ll be singing from the rooftops.’

Mr Dipper began suffering from headaches in October 2017, which his GP dismissed as his sinuses being inflamed.

When antibiotics failed to relieve his symptoms, doctors simply prescribed him other types to try.

‘By February 2018, he had also started to lose weight,’ Mrs Dipper said. ‘Fairly rapidly he shed about a stone-and-a -half.

‘We went back to the doctor and were immediately referred to an ear, nose and throat specialist.

‘By that point, poor Nick was in agony. At our appointment, the consultant felt his glands and knew right away that something was very wrong.’ 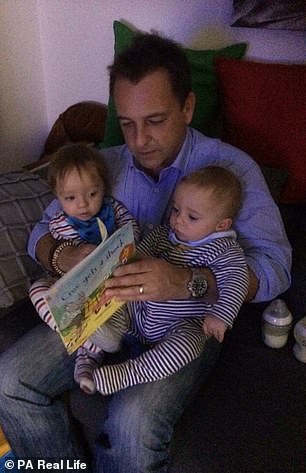 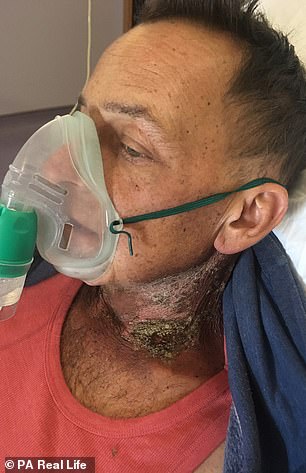 Mr Dipper is hoping to have private immunotherapy treatment to buy him more time with his twins Ely and Ezra (pictured together left), now three. After chemo and radiotherapy, Mr Dipper (right) developed sepsis, which left him ‘drowning in fluid that had built up in his lungs’

After a series of tests, including a biopsy, Mr Dipper was finally diagnosed with nasopharyngeal carcinoma at Royal Berkshire Hospital.

Classed as stage three, the disease had spread to a bone in his skull and lymph nodes in his neck. Mr Dipper immediately began grueling treatment.

‘That was horrendous – especially the radiotherapy,’ Mrs Dipper said.

‘He could barely speak, couldn’t swallow, and lost his taste and smell.

‘He was literally burnt inside and out. Somehow, he made it through every last bit of treatment though.’ 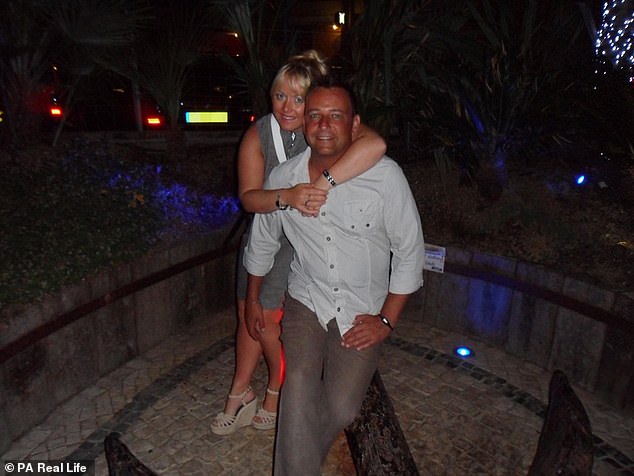 Before the ordeal began, the couple (pictured) thought they had their happy ending following the birth of their twins. They endured two tragic stillbirths when their daughters Eden and Hope were found to have no heartbeat at their 29-week scans in 2013 and 2014, respectively

WHAT IS NASOPHARYNGEAL CANCER?

In the UK, around 250 people are diagnosed with the disease every year.

And in the US, less than one case occurs for every 100,000 people annually, according to the American Cancer Society.

Many do not experience symptoms until the cancer becomes advanced.

However, these can include:

The exact cause of nasopharyngeal cancer is unknown, however, it is more common among those of south Chinese or north African descent.

It has also been linked to a diet high in salt-cured meat, exposure to the Epstein-Barr virus, a job that exposes you to hardwood dust and a first-degree relative with the condition.

The main treatments are radiotherapy and chemo, with a combination usually being used.

Surgery is not an option because the affected area is difficult to access.

Advanced cases are often incurable if the cancer has spread beyond the head and neck.

Once the radiotherapy ended, Mr Dipper was meant to spend 12 weeks recovering. However, in early December, his health rapidly declined.

‘I phoned the hospital and they said to monitor his temperature every two hours and come right in if it spiked.

‘Something in me – maybe it was intuition – set in, because about ten minutes before my 5am alarm to check him went off, I woke up anyway, rolled over, to see him quite literally drowning in fluid that had built up in his lungs. It was harrowing.’

Jumping into action, Mrs Dipper called 999 and her husband was rushed to hospital.

Doctors discovered he had ‘cold sepsis’, which occurs when the body reacts to an infection by attacking its own tissues. The immune response is a drop in temperature rather than the usual fever.

‘The boys had picked up a bug at nursery and Nick’s immune system wasn’t strong enough to cope,’ Mrs Dipper wrote on the family’s fundraising page.

Mr Dipper’s case was so severe his kidneys started to fail and his body stopped processing the morphine he had been taking for pain.

‘He had to have medication to almost reverse the morphine to stop his body overdosing, which sent him into horrendous pain,’ Mrs Dipper said.

‘I remember all these clusters of doctors around working on him, but Nick just looking at me, right in the eye, as if to say, “help me”.’ 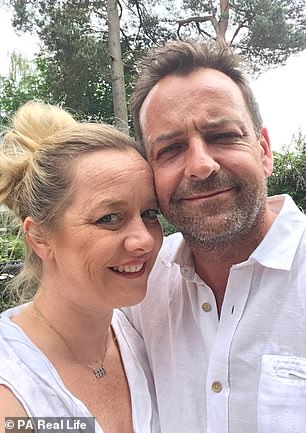 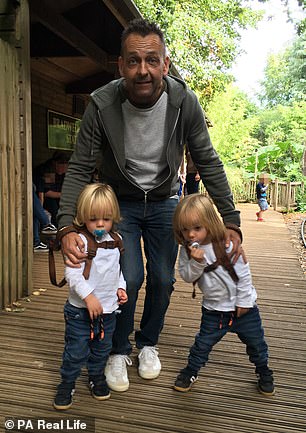 Mrs Dipper refuses to give up on her husband (pictured together left) and ‘cannot bear the thought of raising the boys alone’. After everything they had been through, the couple were ‘enjoying being parents’ to their boys. Mr Dipper is pictured left with the twins before he got ill

Things then went from bad to worse, with Mr Dipper requiring a chest drain.

His wife claims she saw a ‘bucket’ of pus and fluid come away from his lungs, both of which had collapsed.

He was then transferred to the more specialist John Radcliffe Hospital in Oxford for emergency surgery.

‘When he was wheeled to theatre, I had no idea if he’d be coming back out again,’ Mrs Dipper said.

‘But he managed to get rid of the infection and responded amazingly well.

‘He was, against the odds, even home for Christmas, arriving at about 8pm on Christmas Eve.’ 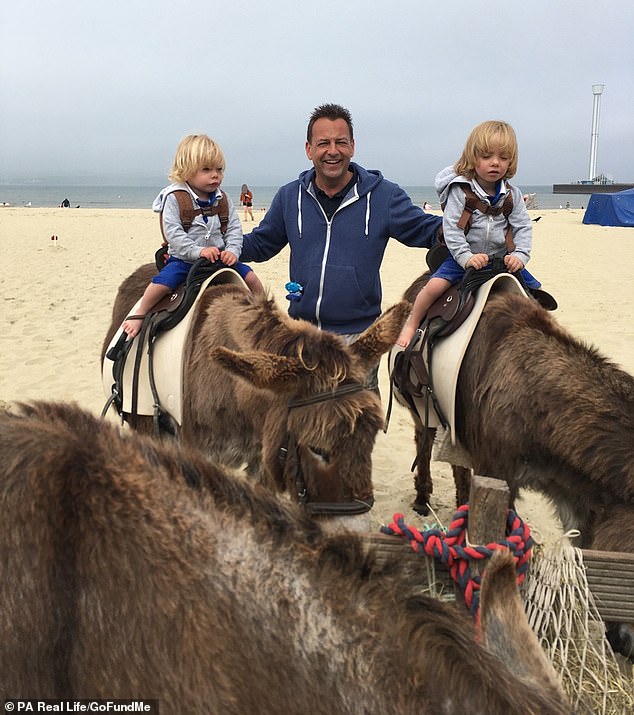 The twins were born at 31 weeks and spent the first seven weeks in neonatal intensive care. They were then home and ‘thrived’, with Mr Dipper enjoying ‘a little normality’

Before the ordeal began, the couple thought they finally had their happy ending following the birth of their twins Ely and Ezra in October 2015.

They endured two tragic stillbirths when their daughters Eden and Hope were found to have no heartbeat at their 29-week scans in 2013 and 2014, respectively.

Following the loss of their daughters, the couple married in Thailand in June 2014 and were thrilled to discover they were expecting early the next year.

‘We were in neonatal intensive care for seven weeks, but the boys have absolutely thrived from that point on,’ she said.

‘After everything we’d been through, we were just enjoying being parents, adapting to twin life and having a little normality.’ 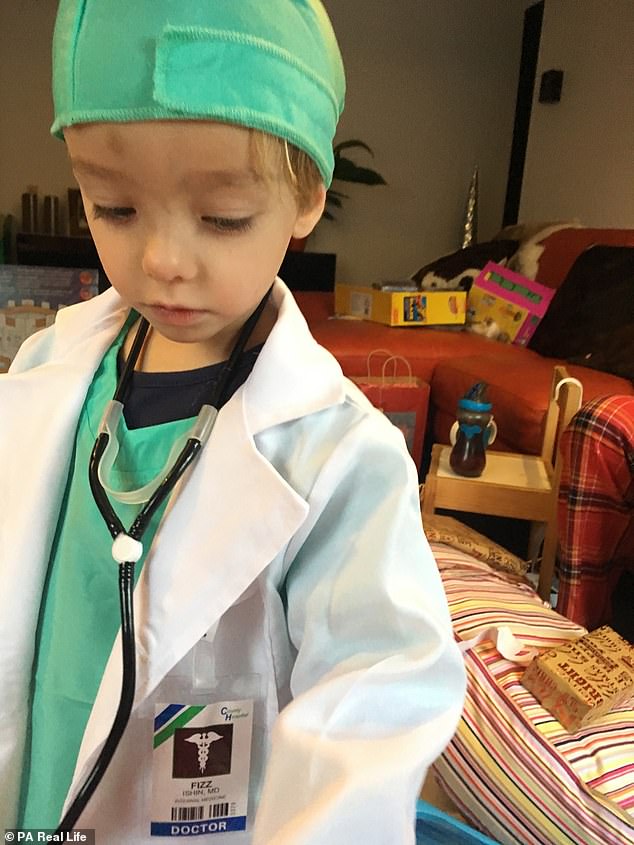 The ordeal sparked an interest in medicine in the boys. Ely is pictured dressed up as a doctor

At the beginning of the year the couple were given some much longed-for good news when an MRI scan of Mr Dipper’s head and neck showed no traces of cancer.

But because there were still signs of the sepsis-causing infection in his body, the couple were advised to wait until he was completely well and then have a full body scan.

‘We completely understood that and knew the infection and inflammation could come up on the scan mistakenly and cloud the results,’ Mrs Dipper said.

The results revealed that while the cancer was no longer in his head and neck, it had spread to his spine, shoulder, right hip, sternum, liver and left lung.

‘Hearing that was unimaginable,’ Mrs Dipper said. ‘We were told the only other option available on the NHS was palliative care, but I simply couldn’t take him home to die.

‘I spoke to an oncologist friend who suggested I talk about immunotherapy. Initially, we thought we’d be able to have it, but it turned out the license the NHS has does not extend to Nick’s rare type of cancer.’ 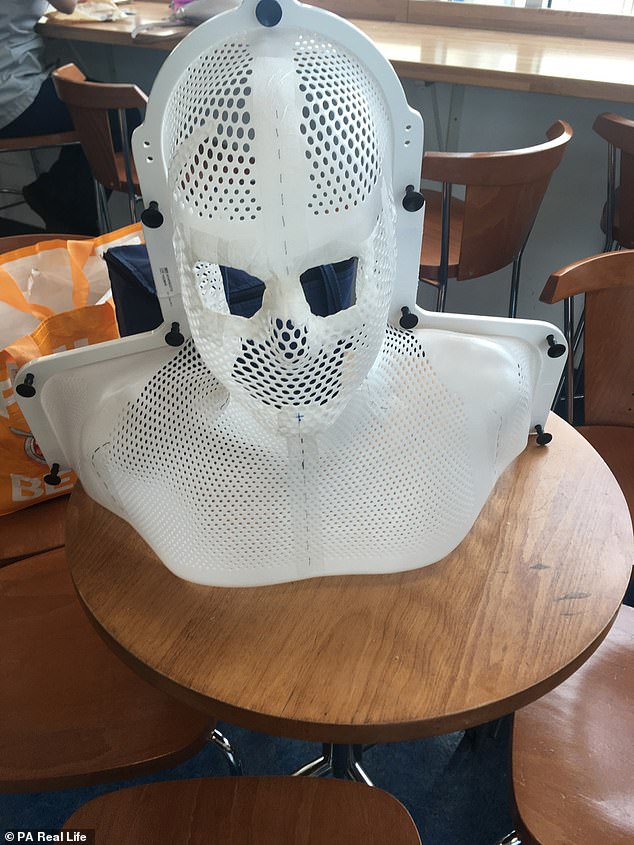 Pictured is Mr Dipper’s radiotherapy mask, which he wore throughout all 30 rounds of the treatment. His wife described the treatment as the most ‘horrendous’ part of the process. Mr Dipper was meant to have 12 weeks to recover once it ended but then developed sepsis

Determined not to give up, the family have launched a GoFundMe page, which they are hoping will help raise the money needed for private treatment.

Donations have flooded in, with almost £30,000 raised in a matter of days – but Mrs Dipper is all too aware that time is of the essence.

‘I’d book the treatment tomorrow if I could, but I never expected it to be as expensive as it is,’ she said.

‘We have put in an individual funding request to our NHS Trust, but also know time is the most important thing and we can’t face a wait right now.

‘I want to thank anybody that has helped with our GoFundMe page so far and will do all I can to help make sure Nick is around to watch our beautiful boys grow up.

Dr Janet Lippett, group director for Networked Care at the Royal Berkshire NHS Foundation Trust, added: ‘In cases where patients have a rare or complex condition all potential treatment options are considered.

‘Where treatment is not routinely available on the NHS, or as part of a clinical trial, we help patients explore all alternative funding options such as an individual funding request, and compassionate use from the appropriate pharmaceutical company.

‘We understand this is a very difficult time and hope the family are able to find a resolution.’

An NHS England spokesperson said: ‘Immunotherapy is available to treat a range of cancers on the NHS, where it is not routinely commissioned for treating a specific cancer an individual funding requests can be submitted.’

Donate to the fundraising appeal here.