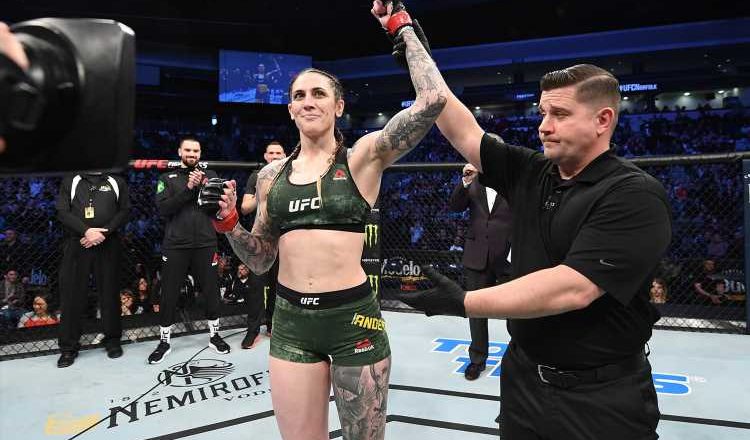 Robert Whittaker, Alexander Volkanovski and Tai Tuivasa: the names of our most-celebrated home-grown talent, who fought their way into the Ultimate Fighting Championship and have built reputations for themselves as serious weapons in the sport.

But over the last few years, another name has worked its way on to that list, the name of a women who has also been given the title of the first Aussie female to be fighting in the UFC: Megan Anderson.

Born and raised on the Gold Coast, Anderson has an inspiring story to tell. After serving two and a half years in the military, she was discharged when it was discovered she had attempted to take her own life. Following her return to the coast and journey to recovery, she found herself getting involved in the local boxing scene. Through her boxing connections, she was introduced to mixed martial arts and began training in 2013.

Cut to July 2017 and Anderson was signed for the UFC, going on to fight the likes of Holly Holm, Cat Zingano and Zarah Fairn Dos Santo. Now, ahead of her bout at at UFC 259 against Amanda Nunes, and one UFC win away from being crowned world featherweight women’s champion, we spoke to the fighter to see what it took to get her where she is today.

Becoming A Fighter Taught Me To Love My Body

Can you describe your entry into UFC – were you always invested in the sport or was there a particular person who got you involved and interested?

I didn’t grow up athletic or playing a lot of sports. I was a big fan of boxing and would go to watch local boxing events with my friends. We ended up getting tickets to a MMA show and I got to talking with the coach who sold me the tickets, who convinced me to try it out just for fitness. I fell in love with the sport, and my journey began from there. It’s crazy to think that I’m now the #1 ranked Women’s Featherweight contender in the UFC on the brink of becoming a world champion.

What does a typical day of training look like for you?

I train martial arts twice a day, everyday, with my team at Glory MMA in Kansas City under head coach James Krause. Each day changes between striking, wrestling, jiu jitsu etc, all the essential elements of mixed martial arts. In addition to these I do strength and conditioning training 3 times per week, and one-on-one specialist sessions with my main coaches. In between, I focus on my mobility and recovery

How do you prepare for an intense fight, like the one against Amanda Nunes?

Training camp typically starts 8-10 weeks out from the fight, where the intensity and focus really steps up. But really, it’s more of the same. It’s what I have been training for my whole career, and I’m approaching Amanda no differently than I am any of my other opponents.

Before a big fight, is there a mantra you say or something you do that helps you get into the right mental frame of mind?

I have been very upfront with the public and my fans about my mental health and the factor that has played in my career. I think one of the biggest turning points in my career that has led to this win streak and title shot has been my ability to conquer the mental side of my game.

I knew I always had the talent and physical skills to be a world champion, and now that I have my mind under control I feel I can truly reach my potential. It has been a long and difficult journey working with my therapist and those closest to me, and through the dedication and work I know now that I am in the right frame of mind for all of my fights.

2020 was a strange time for everyone, but most notably athletes dealing with a cleared competitive calendar. How did you make the most of this time and what did you do to stay fit and healthy – both mentally and physically?

I last fought in February 2020, right before the pandemic hit and competitive schedules cleared. I was actually meant to fight in December 2020 before Amanda pulled out, so it’s been a bit of a longer lay off than I would have hoped, but I have stayed patient and focused, kept up my training, and I’m ready to perform.

Anderson is the co-main event for UFC 259: Błachowicz vs Adesanya this Sunday, March 7 available live on PPV from 12pm AEDT.