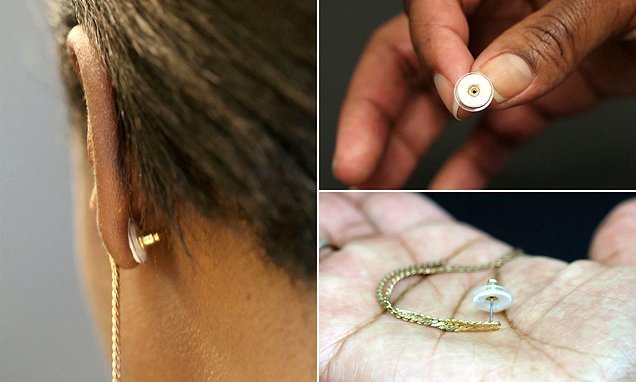 Never forget to take your pill again with these contraceptive EARRINGS

Never forget to take the Pill again! Contraceptive EARRINGS will make it easier for women to remember to be protected ‘because putting on jewellery is part of day-to-day routine’

Earrings containing contraceptive drugs could make it easier for women to keep on top of their birth control, scientists say.

Researchers have found a way to put drugs most often taken in a pill into the backs of earrings and be absorbed through the skin.

Remembering to pop the Pill every day could become a thing of the past, they claim, because the patches would have the same effect and only need changing weekly.

Scientists have released pictures of prototypes of the earrings, which have yet to be tested on humans.

Although there are already numerous contraceptive options for women, and no long-lasting ones for men, the scientists said this could make birth control more ‘appealing’.

‘Making it more appealing should make it easier to remember to use it,’ they said.

The adhesive patch on the back of the earring (pictured, a prototype of the patch) would contain hormones which, when put onto the skin, pass into the bloodstream and prevent pregnancy

Researchers from the Georgia Institute of Technology in the US developed the earrings, which would have the same hormonal effect as the Pill.

‘The more contraceptive options that are available, the more likely it is that the needs of individual women can be met,’ said Professor Mark Prausnitz.

‘Because putting on jewellery may already be part of a woman’s daily routine, this technique may facilitate compliance with the drug regimen.

‘This technique could more effectively empower some women to prevent unintended pregnancies.’

While the contraceptive pill – the most common type of hormonal birth control – is 99 per cent effective if taken perfectly, its effectiveness is reduced to 91 per cent or lower by it being taken wrongly.

This margin for error could be reduced with the earring patch, which wouldn’t need changing as often, its creators said.

A weekly contraceptive patch is already available on the NHS but it’s larger and usually stuck to a limb or the torso.

The earring backs, which haven’t yet been tested on humans, are based on the same technology and release hormones in a way which allows the skin to absorb them.

The researchers, from Georgia Institute of Technology in the US, said the small patches (pictured) could be discreet and easy to use

The researchers suggested the patches could be suitable for developing countries where access to other contraceptives is limited, and also offer more choice for women in wealthier nations

The researchers suggested they could also be suitable for developing countries where access to other contraceptives, like the IUD, coil or injection, is limited.

And the technology could be adapted to be used on watches, rings or choker necklaces, they suggested.

In trials on mice the scientists used the hormone levonorgestrel, which is in the morning-after pill.

It successfully absorbed through the skin in high enough quantities to work as a contraceptive, they found.

But levels of the hormone would drop if the patches were removed for eight hours – a test done to simulate the earrings being taken out before bed.

The researchers said another benefit of the patches was that they could be attached to any earrings which had a back to them.

Professor Prausnitz added: ‘The advantage of incorporating contraceptive hormone into a universal earring back is that it can be paired with many different earrings.

‘A woman could acquire these drug-loaded earring backs and then use them with various earrings she might want to wear.’

The research was published in the Journal of Controlled Release. 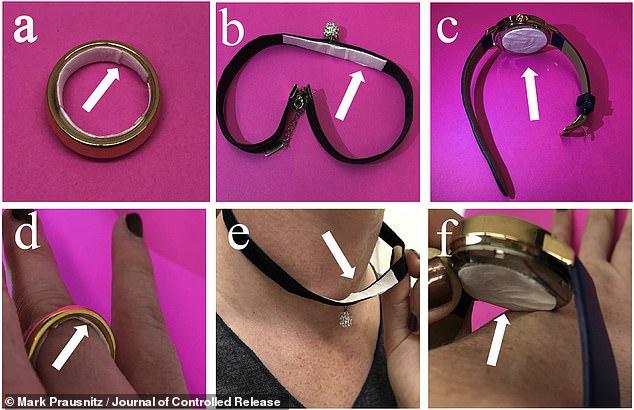 The researchers said the same technology could be applied to rings, choker necklaces or watches, which are all worn tightly on the skin

MALE PILL FOUND TO BE SAFE AND EFFECTIVE

A new form of male birth control has been deemed safe by researchers testing the new drug on a group of men.

The pill is the second promising oral contraceptive in the works for men, and both are following in the steps of a birth control gel which is currently in clinical trials.

It’s a major milestone, but it will likely be 10 years pr more before male contraception is available.

Researchers at Los Angeles Biomed Research Institute and the University of Washington this week reported their drug safely reduces the hormones required for sperm production without killing men’s sex drives.

Currently, men’s only contraception choices are condoms or vasectomies.

There are lots of options for women, on the other hand, but none is without its side effects, and almost all forms disrupt women’s hormones in order to prevent pregnancy.

The new drug being tested on men, 11-beta-MNTDC, is a modified synthetic form of testosterone.

It acts both on male hormones, called androgens, and on progesterone, a hormone produced in women’s ovaries to facilitate pregnancy and by the male endocrine system to produce testosterone.

The idea is that 11-beta-MTDC should diminish sperm production in the testes while maintaining normal testosterone levels throughout the rest of the body.

In their tests on 40 adult men – 10 of whom got placebos – the drug appeared capable of reducing hormone production down to levels of someone who is androgen deficient.