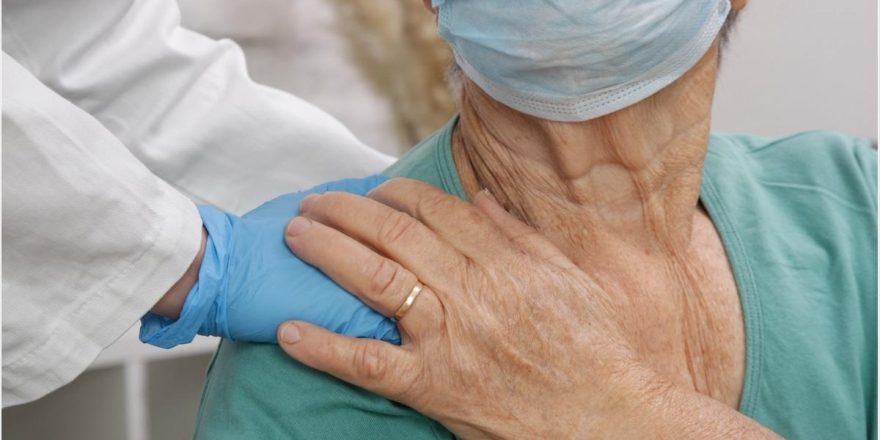 The coronavirus disease 2019 (COVID-19), which is caused by infection with the severe acute respiratory syndrome coronavirus 2 (SARS-CoV-2), has claimed over six million deaths to date around the world.

Many of these fatalities occurred in long-term care (LTC) facilities of high-income countries, with a mortality rate of 10-40% recorded among these LTC facility residents. For example, Swedish LTC residents reported a thirty-day mortality rate of 40% among SARS-CoV-2 infected individuals, which was only 6% in matched controls without the infection.

However, the long-term effects of SARS-CoV-2 infection on mortality of LTC residents who recover from COVID-19 remain uncertain. Additionally, the life expectancy in the population post-acute phase (after thirty days) of the disease remains controversial. 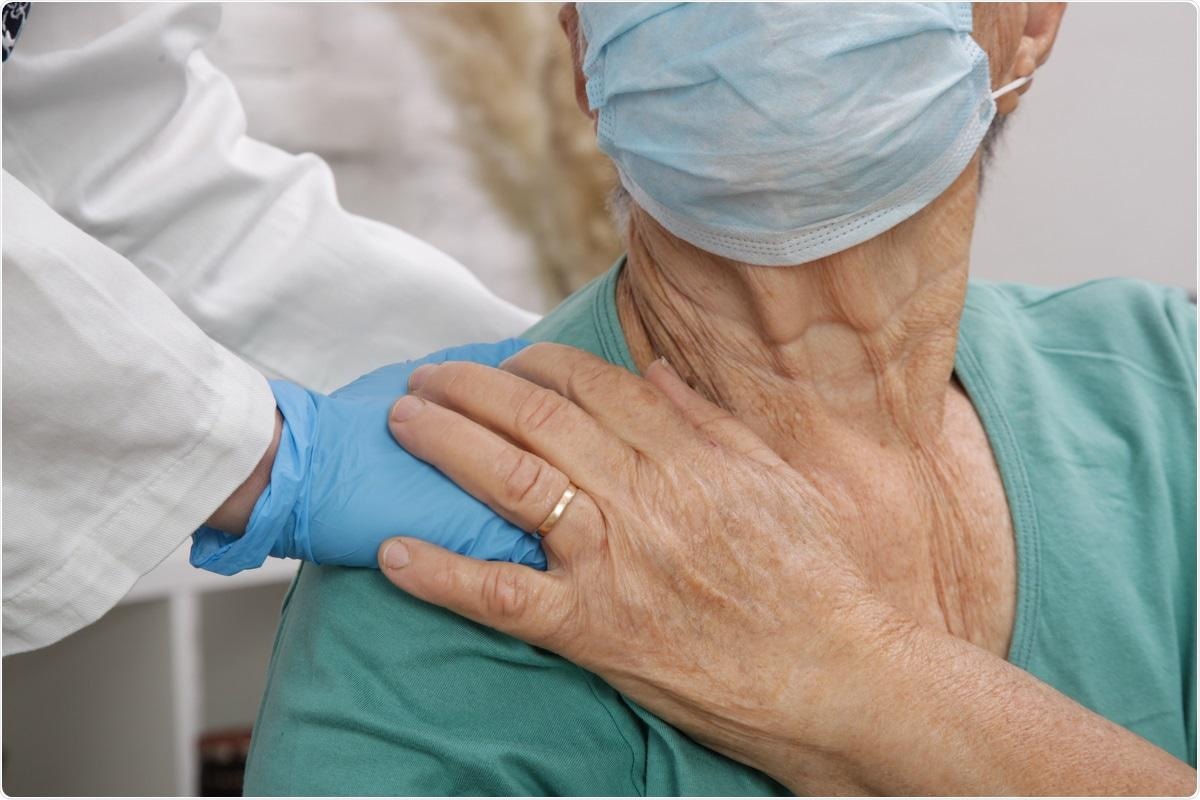 In a recent study published on the medRxiv* preprint server, researchers evaluate the mortality rate in Swedish LTC facilities for eight months after patients had recovered from acute SARS-CoV-2 infection.

This retrospective cohort study included a total of 3.721 Swedish LTC residents over the age of 65 years who were infected with SARS-CoV-2, as well as 3,731 control who were matched (1:1) based on their age, body mass index (BMI), gender, comorbidities, health status, and prescription medication usage.

The primary outcome that the researchers were interested in assessing was all-cause mortality among infected residents as compared to controls. To calculate the absolute risk of death, the researchers use Kaplan-Meier plots, whereas hazard ratio (HR) for death was plotted over time using flexible parametric models.

The median age of the residents was 87 years, with 65% of the study cohort consisting of females. Notably, comorbidities were frequently reported among LTC residents. SARS-CoV-2 infections exhibited a sharp and early increased predisposition for death, at 40% in the infected group and 6% in the control group. 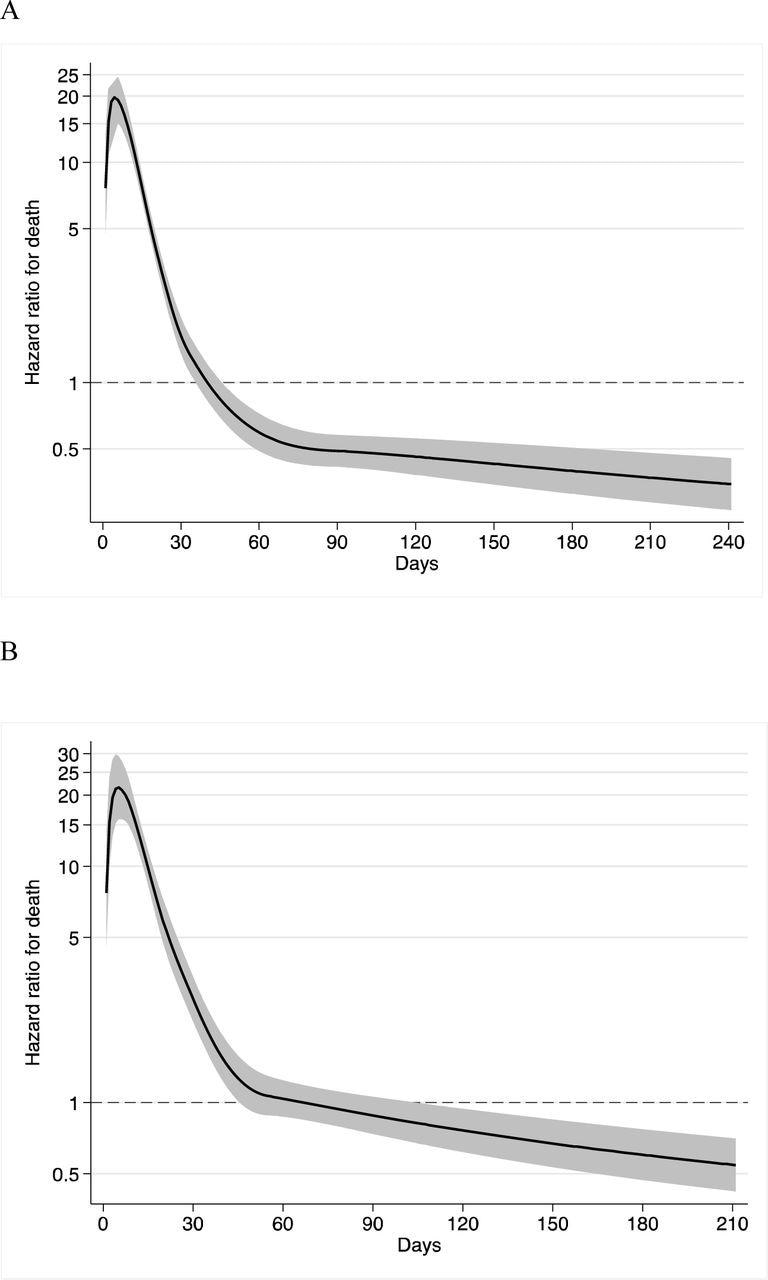 Hazard ratio for death in residents with SARS-CoV-2, as compared with controls in (A) the main analysis and (B) the sensitivity analysis.

A total of 1,487 deaths occurred among the infected residents as compared to 211 uninfected controls in the first month. Over the following month, 93 and 144 were recorded in the two cohorts, respectively. In the third and fourth months of follow-up, 33 and 121 deaths, and 38 and 126 deaths, respectively, were reported.

In the subsequent months, a similar pattern was observed. Meanwhile, 133 deaths occurred between 61-210 days after infection among SARS-CoV-2 infected residents as compared to 420 deaths that were recorded in the controls, with an HR of 0.41. The sensitivity analysis revealed 131 deaths among infected individuals and 278 deaths in the uninfected control group with an HR of 0.76.

No excess mortality was detected among LTC facility residents after the acute phase of SARS-CoV-2 infection. Nevertheless, the life expectancy based on age and sex was much lower in uninfected LTC residents as compared to the general population.

The study findings suggest that life expectancy is not reduced in LTC residents who survive the acute phase of SARS-CoV-2 infection. Of note, the death rate was reduced in longer follow-ups despite concerns regarding residual debilitation after infection.

The first wave of COVID -19 in Swedish LTC facilities led to an average loss of life expectancy of fewer than 1.6 years, which is much lower when compared to that in the general population.

Determining the burden of COVID-19 by calculating the years of life lost based on age and gender-dependent life expectancy, without considering general health and LTC residence, can yield inflated estimates. Thus, sufficient information on comorbidities should be considered when estimating years of life lost to calculate the true morbidity of COVID-19.

medRxiv publishes preliminary scientific reports that are not peer-reviewed and, therefore, should not be regarded as conclusive, guide clinical practice/health-related behavior, or treated as established information.

I am a medical content writer and editor. My interests lie in public health awareness and medical communication. I have worked as a clinical dentist and as a consultant research writer in an Indian medical publishing house. It is my constant endeavor is to update knowledge on newer treatment modalities relating to various medical fields. I have also aided in proofreading and publication of manuscripts in accredited medical journals. I like to sketch, read and listen to music in my leisure time.