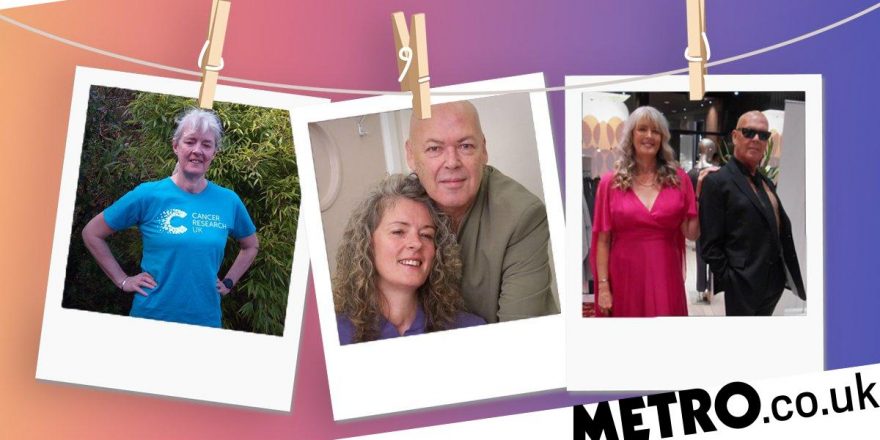 Stepping into the hospital in November 2017, I didn’t think anything of going for my routine mammogram appointment.

At 57, this was my third, and the first two had been fine. A little uncomfortable, maybe, but nothing that you’d give a second thought to.

I’d always kept up with my regular appointments and check-ups and this year was no different.

After exchanging smiles and small talk with the nurse, it was over within 10 minutes and I went home, forgetting about it almost immediately.

But the next week, I got a letter, inviting me back. I thought the doctors were probably being overly-cautious but still, I took my husband, Howard, along with me for the follow-up appointment.

Back at Addenbrooke hospital I had another, more detailed, mammogram, an ultrasound and biopsy. Howard had just stepped away to get a cup of coffee, when the nurse called me in. ‘Where’s your husband?’ she asked immediately on seeing me alone.

I knew then that something wasn’t right. And when she made me a cup of tea as we waited for him to return, there was no mistaking something serious was happening.

When Howard reappeared, the doctor came in. ‘We need to wait for the results of the biopsy, but it looks like cancer,’ she told me. 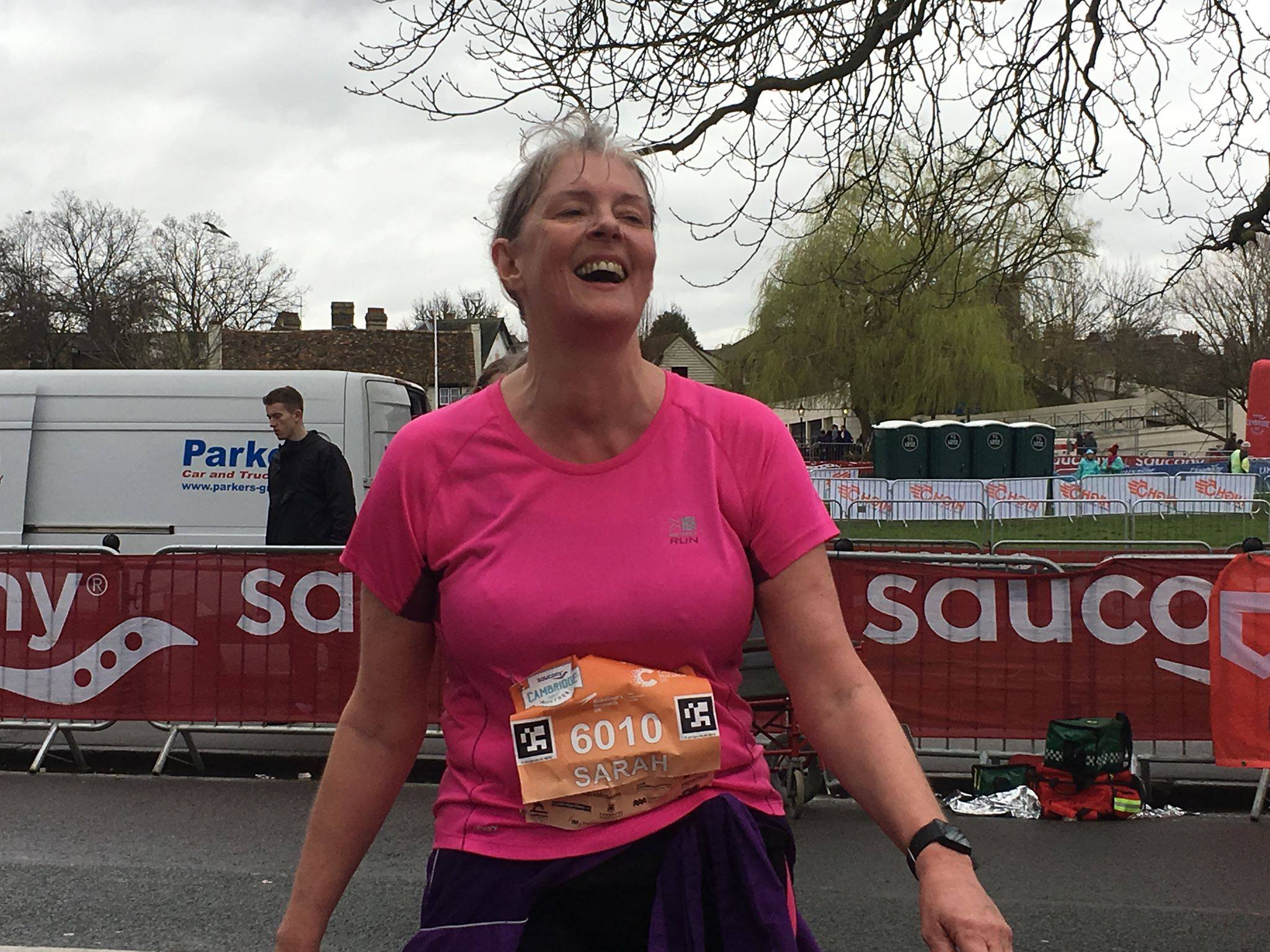 Now, no-one ever wants to hear those words but I never once thought, ‘why me?’ I knew that one in two people get a cancer diagnosis now, so it felt more like ‘why not me?’

And as the doctor assured me it was treatable and explained the various medical professionals would hold a multi-disciplinary team meeting, where everyone involved in my care would discuss the best way forward, I went home feeling reassured, like I was in the best hands possible for my care.

And I only felt more relieved when I returned 10 days later to meet my surgeon and he told me I had Stage 1 Grade 1 breast cancer. ‘Stage four is a rottweiler,’ he explained. ‘Stage one is poodle.’

‘Will I lose my breast?’ I asked and when he shook his head, I asked if I’d lose my hair. Again, he said no.

I went home almost smiling. It sounds strange, but I felt almost lucky. Things could have been a lot worse.

I was 57, I’d always had good health. I wasn’t going to sit around and mope.

I was booked in for a lumpectomy and Sentinel lymph node excision for January 2018 and, having never gone under general anaesthetic, I was extremely nervous. But the anaesthetist was so lovely, he put me straight at ease. And, after going in at 6am that morning, I was home by 9pm.

I was put on Tamoxifen – a hormone therapy meant to prevent cancer cells from multiplying – in February, which gave me horrendous hot flushes and sent my weight spiralling upwards, and in March, I started a 15-day stretch of radiotherapy.

To view this video please enable JavaScript, and consider upgrading to a webbrowser thatsupports HTML5video

Having worked as a croupier in a casino, sometimes working night and day shifts back-to-back, I thought I’d known what tiredness was. But this was different. This was fatigue and even as someone who was active – I was training for a half-marathon when I was diagnosed – it floored me.

It was definitely the hardest part of the treatment and even now, over four years on, I still get bouts of it.

Thankfully, after having the final session of radiotherapy on my 58th birthday, I didn’t need any further treatment and I was determined to live my life to the fullest, as a way to thank the wonderful team who’d worked so hard to save it.

So I started walking every day, running when I felt up to it, and a year later, in March 2019, I completed the half-marathon I’d been signed up for when I was diagnosed.

Since then, I’ve done another two half-marathons and completed various Race for Life events and the 5k Your Way, an event and support group that takes place once a month for anyone who has been touched by cancer.

I try not to dwell on what I’ve been through, or worry about the future – worrying only ruins today and I’ve learnt tomorrow is not a given – but if I’m having a bad day, getting out in the fresh air to exercise is a great way to clear my head.

Before the pandemic struck, I also took part in two fashion shows, made up of breast cancer patients, for the hospital who treated me. It involved strutting my stuff down a catwalk in lingerie, then in high-end outfits. Howard even walked down with me in one. It was something I’d never have dreamed of doing before and something I certainly didn’t feel comfortable doing, given the extra weight I was carrying.

But I was so proud when we made enough to buy a new X-ray machine for the hospital the first year and then, to pay for a counsellor the following year.

In March this year, I had surgery for thyroid cancer, but after four weeks, I was back running again. I’ve been through a lot but it’s only made me more determined to enjoy every glass of wine, savour every meal – and be a bit more patient with Howard!

For the last four years, I’ve had mammograms every year, all of which have been clear, but next year, once I’ve been cancer-free for five years, they’ll go back down to every three years. To be honest, I’d prefer it if they remained annually but I trust the doctors.

Mammograms are so important and I’d encourage everyone to have one – and to check their breasts in between. That goes for men too. A simple scan – or squeeze – can save a life.

Sarah is supporting Cancer Research UK’s Race for Life in partnership with Tesco. Sign up to your local event at raceforlife.org

After being diagnosed with breast cancer during a routine mammogram in November, Dawn Butler MP was grateful to find out it was caught early.

However, she learned that a million women missed out on their mammograms due to the pandemic, with an estimated 10,000 currently living with undetected breast cancer.

Determined to change that, Dawn has launched a campaign with Metro.co.uk to get a million women to book their missed screenings.

If you have been inspired to do so after hearing Dawn’s story, please let her know on her website, emailing us or using #FindTheMillion on social media.