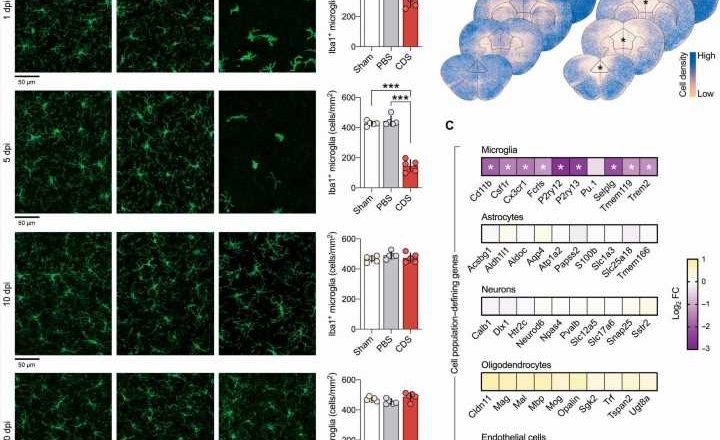 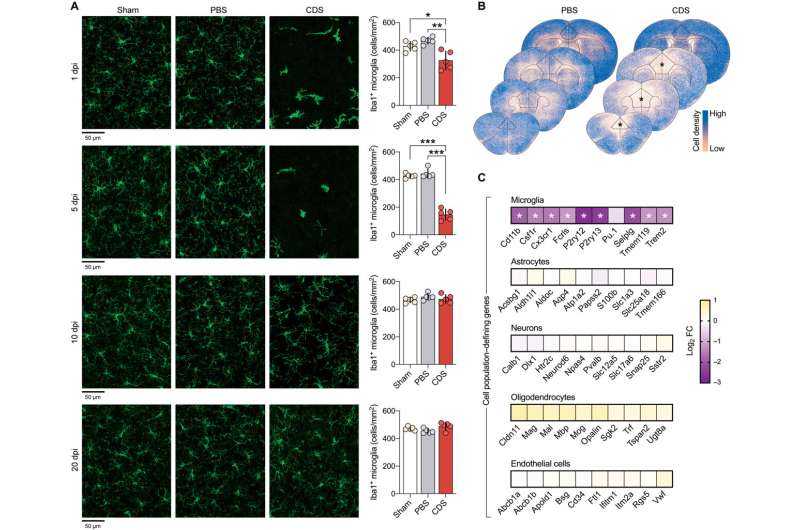 The prefrontal cortex (PFC) is a brain region that regulates cognitive functions, and a distinct feature of the region is protracted adolescent maturation, to acquire mature cognitive abilities in adulthood. In a new report now published in Science Advances, Sina M. Schalbetter and a research team in pharmacology, neurology, and immunology, in Switzerland, Germany, U.S. and U.K. showed how microglia—the resident immune cells of the brain contributed to this process of maturation. The results indicated how transient and cell-specific deficiency of prefrontal microglia in adolescence sufficiently induced adult emergence of PFC-impairments in cognitive functions, dendritic complexity and synaptic structures. While defects in prefrontal microglia in adolescence could alter the excitatory-inhibitory balance in adult prefrontal circuits, the team did not observe cognitive sequelae when prefrontal microglia were depleted in adulthood. The findings therefore identified adolescence as a sensitive period of time for prefrontal microglia to impact cognitive development.

Maturation of the PFC

The PFC forms the anterior pole of the mammalian brain and provides executive “top down” control relative to a variety of cognitive processes, including decision-making, goal-directed behavior, attention, cognitive flexibility and working memory. As a distinct feature, the PFC maintains protracted maturation that is sustained throughout adolescence until early adulthood to acquire mature cognitive abilities. The PFC is therefore the last brain region to reach full maturity in humans, and in rodents. Postnatally, the PFC undergoes substantial neuronal circuitry refinement and synaptic connections to adapt prefrontal circuits to respond optimally to changing demands, which occur during the transition from adolescence to adulthood. Disturbances in PFC structures and functions are typically strongly associated with major psychiatric disorders, including schizophrenia and bipolar disorder. Synaptic refinement is increasingly involved in dynamic actions of microglia—the resident immune cells of the brain parenchyma. During neurogenesis and brain development, microglial cells arise from erythromyeloid progenitor cells in the yolk sac to then colonize the brain during early fetal development and retain the capacity for self-renewal in the adult brain. Microglia contribute to remodel brain circuitries and synaptic connections via phagocytic and non-phagocytic mechanisms and can mediate synaptic refinement across diverse brain regions, including the PFC. However, the development of mature cognition relative to the adult PFC functionality, remains to be known. To accomplish this, Schalbetter et al. established a model system to study the concentration of microglia to the structure and functional maturation of PFC in mice.

The PFC experiments and mouse models

While neuroscientists have already developed several genetic and pharmacological models for cell-specific microglia manipulation. Schalbetter et al. chose to regulate microglia selectively in the PFC during a restricted time window, without inducing nonspecific effects on peripheral immune cells or other cells of the central nervous system. The scientists used stereotaxic injection of clodronate disodium salt (CDS) to induce selective apoptosis of microglia by inhibiting the mitochondrial adenosine 5′-diphosphate/adenosine 5′-triphosphate (ATP) translocase for mitochondrial modulation. This was the most suited method to deplete microglia selectively and experimentally from the PFC during adolescence in an animal model. The transient loss-of-function experimental approach showed how the depletion of prefrontal microglia during adolescence induced lasting changes in PFC-associated cognition and synaptic structures. The team conducted the experiments using mice aged six weeks and chose this timeframe as a critical window of synaptic refinement and dendritic remodeling within the maturing PFC. The timeframe coincided with increased prefrontal expression of microglia-defining genes and complement component-3, the latter of which is relevant for synaptic remodeling via microglia. The scientists used a control mice cohort that underwent sham surgery, and a control mice cohort receiving injections of phosphate buffered saline, in addition to the CDS-injected mice. The CDS-mice cohort showed transient reduction in the ionized calcium-binding adaptor molecule 1-positive microglial cell numbers in the PFC spanning the infralimbic, prelimbic and anterior cingulate cortices. The changes began to emerge a day post-injection (dpi), and peaked five days after, and normalized by 10 days post-injection. 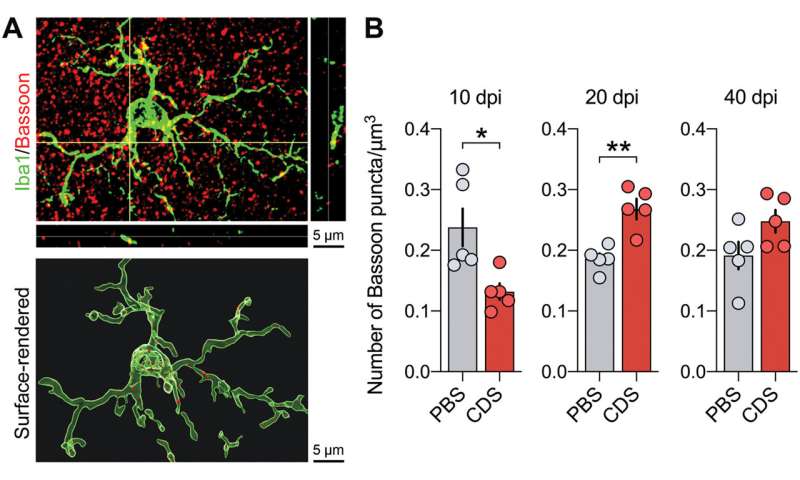 Schalbetter et al. examined how the behavioral and cognitive development could be influenced by prefrontal microglia deficiency during adolescence. For this, they subjected the mice cohorts to CDS (clodronate disodium salt) or PBS (buffer control) injections and allowed them to grow into adulthood. By 12 weeks, the team began adult behavioral testing including social approach behavior, social recognition memory, temporal order memory and the extinction of contextual fear. The outcomes highlighted intact social behavior in both groups, although the CDS mice could not discriminate between a new vs. familiar mouse, demonstrating impaired social recognition memory. Similarly, adult CDS mice showed impaired temporal order memory for objects, to show the long-term impact of cognitive deficits arising from adolescence. The results showed how mice with transient prefrontal microglia depletion in adolescence developed PFC-related cognitive deficits into adulthood. 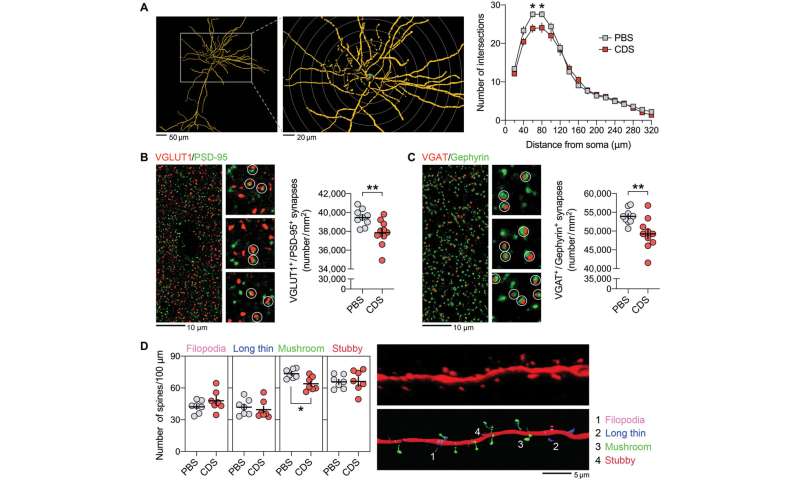 Relative to the emerging role of microglia during synaptic refinement, Schalbetter et al. studied how transient prefrontal microglia depletion in adolescence altered synaptic development and functions. During the experiments, the team used ingenuity pathway analysis for functional network prediction of genes that were differentially expressed in the PFC at the peak of CDS-induced microglia depletion. With decreasing microglial cell density, CDS mice showed altered gene expression to suggest how acute deficiency of microglia in the adolescent PFC could affect transcriptional processes relative to neuronal circuit remodeling. The interference had long-term impact, causing dysregulation of functional networks to induce persistent changes in neuronal circuits and synaptic structures into adulthood after CDS-treatment in adolescence. They credit the outcome to a likely interference of the maturation process in the PFC during transition from adolescence to adulthood. They then provided a window of vulnerability for cognitive and synaptic sequelae post-prefrontal microglial deficiency to show how pre-adolescent prefrontal microglia depletion led to a spectrum of adult synaptic abnormalities.