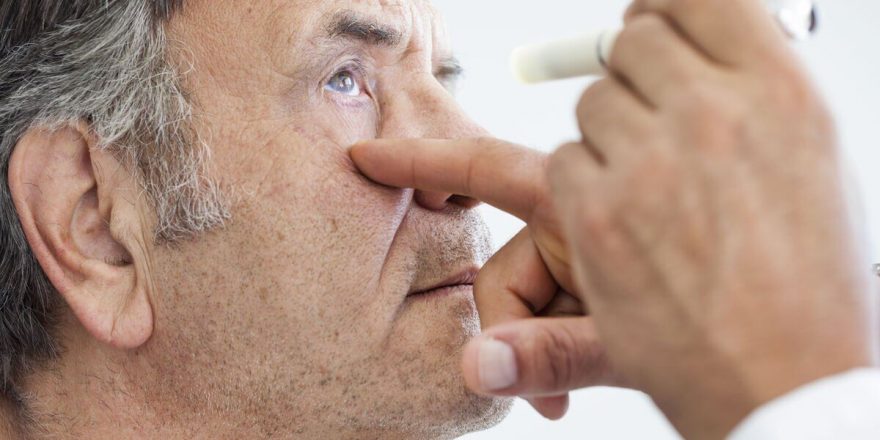 Prolonged screen use may cause eyeballs to grow – risk of blindness

Changes in a person’s vision, such as flashes of light and floaters, are common occurrences in the general population. These signs can be common signs of impending blindness due to retinal detachment, however. Retinal detachment is generally associated with trauma to the eye and vitamin deficiencies, but the sight-threatening disorder may also be a hidden risk of screen exposure.

The harm of digital eyestrain is barely noticeable in the short-term, but permanent damage can eventually occur.

When the eyes spend an excessive amount of time focussing on close objects this causes the eyeball to elongate.

Doctor Eric Chow, a Miami, Florida optometrist, told the Guardian last year: “Studies have shown that the longer the axial length, the higher the risk of eye diseases, like glaucoma, retinal detachment and cataracts.”

Another deleterious component of screen exposure is the amount of light emitted by modern screens, which may be far more harmful than that of TV screens.

The length of screen exposure has also multiplied in recent decades, and the distance between us and our screens has decreased, explains QuStudio.

It continues: “Retinal detachment is directly related to screen use to the point when it can be considered a work-related accident if it occurs while a work is in front of the screen.”

Doctor Chien Wong, the consultant retinal surgeon at OCL Vision, explained that retinal detachment occurs when the light-sensitive layer at the back of the eye – the retina – comes away from the wall of the eye, a bit like wallpaper peeling off.

The expert continued: “The retina is the part of the eye which captures light and sends signals to the brain, which in turn enables your sight.

“This process is a fundamental part of being able to see, so retinal detachment is a serious condition which should be treated urgently.”

According to the expert, about one in 10,000 adults per year will develop retinal detachment and older age is a risk factor, as is experiencing some form of trauma to the eye.

He cautioned: “[The condition] can quickly lead to permanent blindness if left untreated.”

Time is of the essence when threatening retinal detachment, as there are currently no treatments to restore vision completely back to normal once the condition has gone past that stage.

What are the signs of retinal detachment?

“The condition is painless, so the most common symptoms to watch out for are visual floaters, which look like lines or squiggles in your vision – as well as what appears to be a shadow-like curtain in the peripheral vision,” explained Doctor Wong.

Floaters describe the sensation of dark spots casting shadows on the retina and have a number of known causes.

They may be caused by infection, inflammation and haemorrhages, but the vast majority of cases are due to age-related degeneration.

Patients often compare floaters to “flies”, “cobwebs” or “worms” that become more pronounced against light backgrounds, according to the Australian Family Physician.