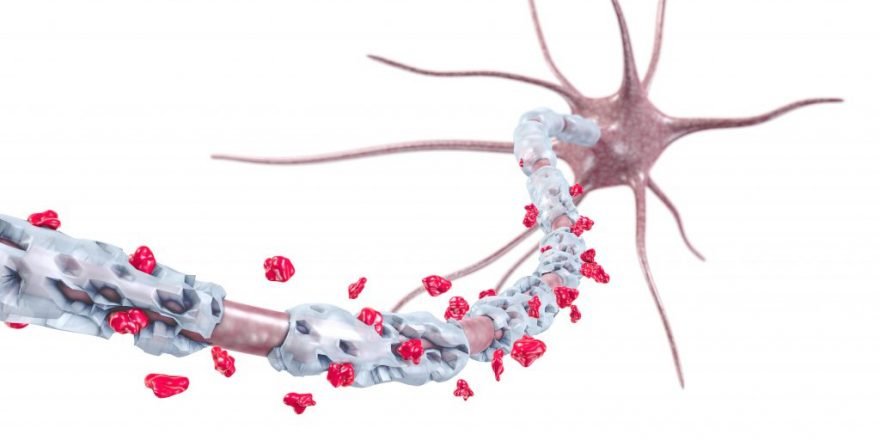 Researcher: What caused the nerve damage in Multiple sclerosis?

Harmful protein accumulations is an important factor in MS

Multiple sclerosis (MS) is a yet incurable disease in which the nerve cells are increasingly damaged. A recent study found that harmful protein to play this apparently deposits a decisive role. A knowledge that opens up new approaches for the therapy.

The inflammation in MS, the nerve cells respond to the accumulation of harmful protein aggregates in the cell body, which ultimately can have a death of the nerve cells, reported the research team led by Professor Dr. Manuel Friese from the Institute for neuro-immunology and Multiple sclerosis at the University hospital Hamburg-Eppendorf (UKE). In their Attempt succeeded, the researchers to eliminate protein deposits and to keep the nerve cells from dying. The results of the study were published in the journal “Nature Neuroscience”.

Changes in the sequence of genetic programs

It is characteristic of the Multiple sclerosis is an inflammation in the brain tissue, which lead to a progressive damage to the nerves leads cells. But it was so far possible only with difficulty, to investigate exactly how the nerve cells react to inflammation, says Professor Friese, whose research focuses on the mechanisms of nerve cell loss in MS. New molecular biological methods have allowed the research team an insight into the reaction pattern of nerve cells that are exposed to an inflammatory Stress. With the help of cell-specific gene expression analyses were able to the researchers changes in a number of genetic programs.

As a result of the inflammation, the activation of the cell’s own machinery for disposal of solid waste, expressed as the Central reaction of the nerve cells, Dr. Dr. Jan Broder Engler, the carried out the bioinformatic analyses in the context of the current study have been reported. The body of accumulations of damaged or failed attempts folded proteins break down, otherwise, can lead to cell damage. At the same time, the researchers were able to an accumulation of the Protein Bassoon to keep an eye on in the nerve cell bodies, which would be a conclusive explanation for the activation of the waste elimination.

Basically, the Bassoon is “naturally in the nerve cells,” evidence of a inflammation lead to a redistribution and a massive accumulation of the Protein, according to the research team. “Similar toxic protein aggregates were known already in neuro generative diseases such as Alzheimer’s or Parkinson’s disease,” adds Dr. Benjamin Schattling from the Institute for neuro-immunology and Multiple sclerosis. It was surprising to find such changes in the MS, and this also opened up a new therapeutic approach point.

Protein deposits could be eliminated

After the protein deposits were detected, it was the goal of the research team to eliminate these toxic protein aggregates, explains Professor Friese. This was finally managed with a substance which improved the disposal of the degradation of marked proteins. So the nerve cells could be preserved from destruction, which opens up a promising new treatment option in MS.

On the Basis of the new findings, the researchers hope to be able in a next step, new methods of treatment against Multiple sclerosis develop, which is not much more to offer in the late Phase of the disease help in the common immune therapies are effective. In addition to the researchers of the UKE also, scientists of the Leibniz-Institute for neurobiology in Magdeburg, Friedrich-Alexander-University of Erlangen-Nuremberg, the Georg-August-University of Göttingen and the University of Geneva were in the current study involved. (fp)