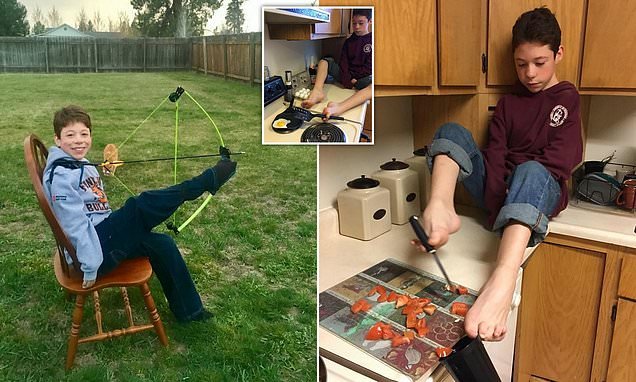 Schoolboy, 14, uses his FEET to write, eat, cook and play archery after being born with a rare muscle weakness condition rendered his arms useless

A schoolboy has learnt to write, eat and cook with his feet after being born with a rare muscle weakness condition.

Most of the muscles in his shoulders do not work and his arms hang limp at his sides, so he has learnt to use his feet instead.

The 14-year-old can even play sports, such as wrestling and archery, with just the use of his feet.

The youngster, of Stevensville, Montana, is slowly becoming reliant on a wheelchair because he can only walk on his tip toes.

He has had to endure cruel taunts from school bullies. But he has used wrestling and painting as a way to embrace his differences. 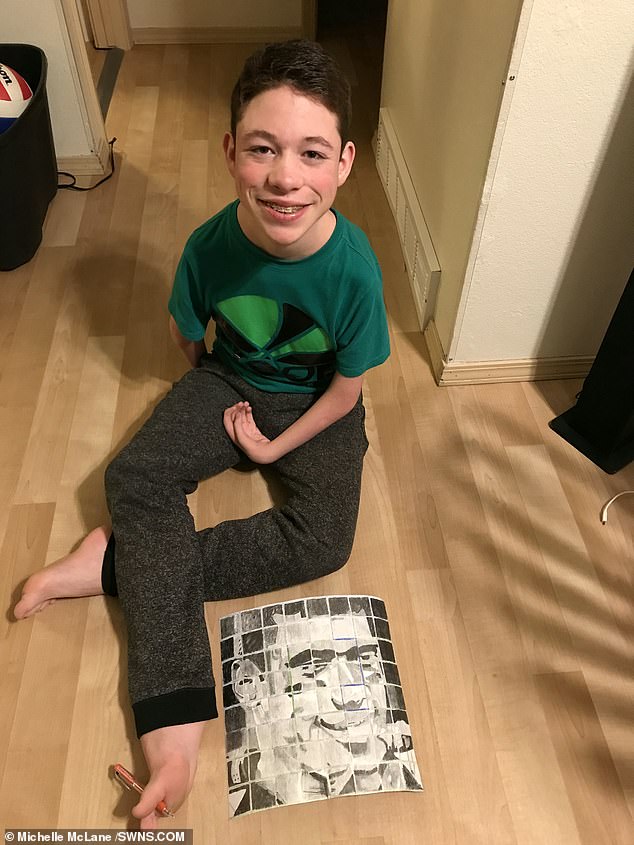 Devin McLane, 14, has learnt to writes, eats and cook with his feet after being born with a rare muscle weakness condition called Arthrogryposis Multiplex Congenita 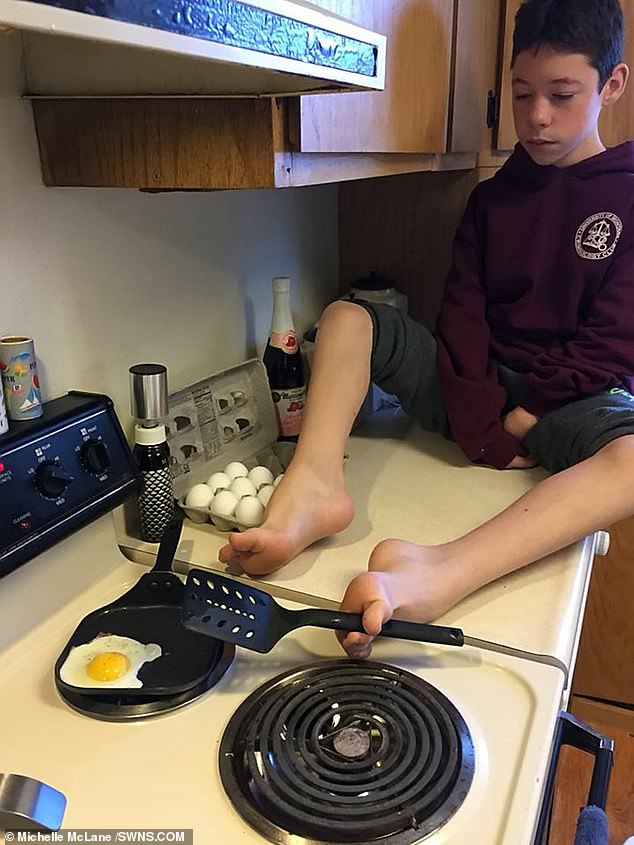 Devin, of Stevensville, Montana, US, was even able to crack an egg with his foot by the age of six when his mother, Michelle McLane, 36, started to teach him how to cook 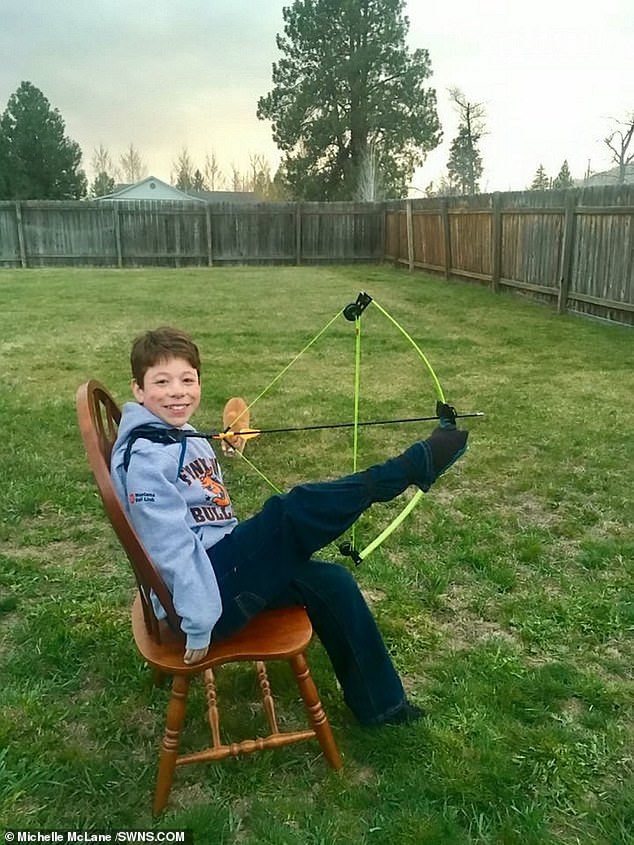 Devin, whose arm and shoulder muscles are weak, can even play archery using his toes

His mother Michelle, 36, helped him learn to carry out everyday tasks – and he was even able to crack an egg with his foot by the age of six.

One in 3,000 are born each year with AMC in the US, according to the National Institutes of Health. Numbers for the UK are unclear.

Ms McLane, who raised Devin as a single mother, found out Devin had AMC while she was pregnant.

She said: ‘He was diagnosed in my second ultrasound.

Arthrogryposis is an umbrella term used to describe more than 300 conditions that cause curved joints.

One in 3,000 are born each year with AMC in the US, according to the National Instututes of Health.

The cause is believed to be down to the development of connective tissues in the first 10 weeks of pregnancy.

In AMC, this tissue fuses a joint in place. This can severely restrict movement in the areas affected, which leads to the tendons around the affected joint being unable to stretch to their normal length, according to The Arthrogryposis Group.

‘I was very lucky that I had a doctor who told me in advance. It helped prepare me.

‘I started reaching out to other families who had AMC kids. I did my research and I tried to prepare myself.’

AMC is not a specific diagnosis, but rather an umbrella term for many conditions which affect the joints, which can then lead to muscle atrophy.

Ms McLane said: ‘When I had Devin, it was still a shock. You go through all the emotions. I was sad and I was happy.

‘But I knew that I could handle anything, even being young and on my own.

‘My faith was strong and I knew I would figure it out.’

At first Ms McLane tried to encourage her son to use his hands. But his arms have always hung limp by his side.

She said: ‘I would put his arms on his bottle and they would stay for a second then they would flop off.

‘I tried to tie his hands to his bottle with shoelaces but it didn’t work.

‘One day we were lying on the floor, I looked at his feet and I thought: “this is doable”.

‘I realised: “This kid can use his feet”. We started doing it and we never looked back.’ 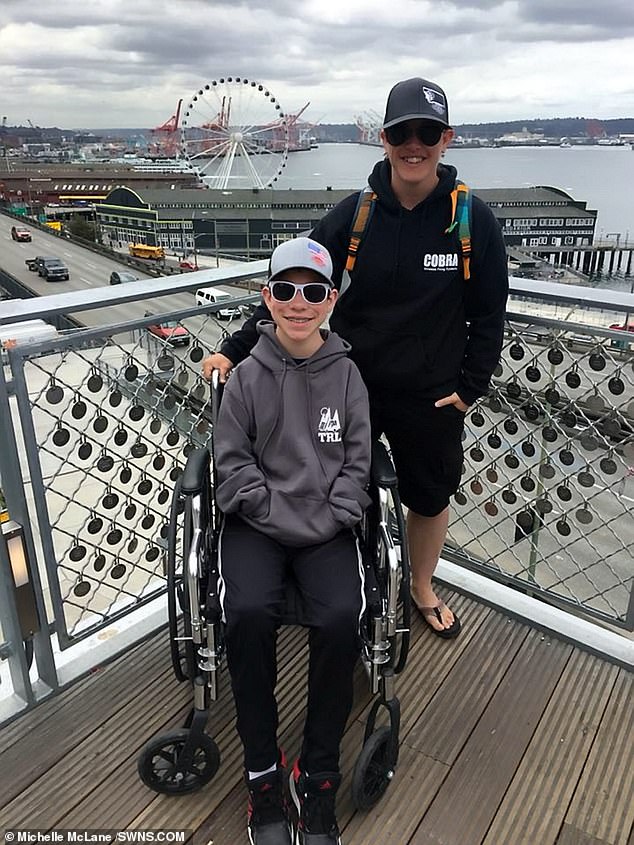 Devin is becoming reliant on a wheelchair to get around. Pictured, with his mother, who raised her son single-handed after finding out her had AMC while she was pregnant 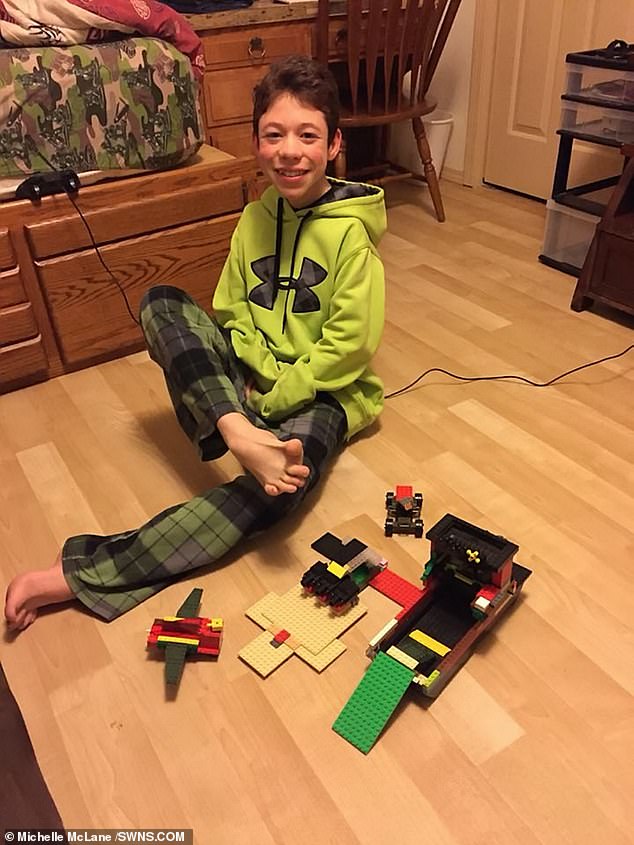 Devin can do every day tasks – even brushing his teeth- with his feet. He also uses his mouth, although recently has needed to adjust since getting braces fitted last May 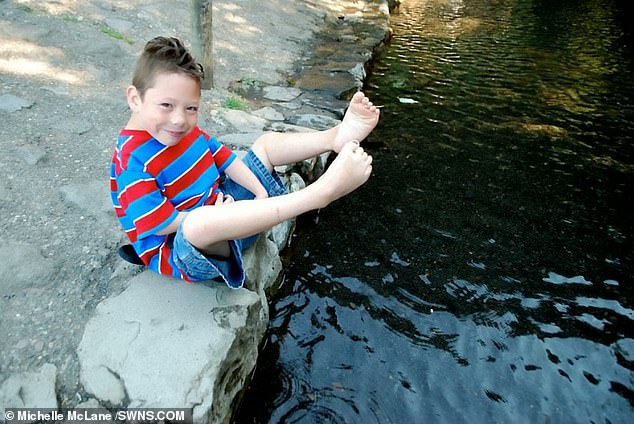 Devin, pictured age seven, was born with AMC, and his mother attempted to help him use his hands at first

Soon Devin, a straight-A student, was eating, brushing his teeth and writing with his feet and, at the age of six, Ms McLane decided to begin teaching him how to cook.

She said: ‘I needed to teach him to cook so that he can be independent.

‘He has always enjoyed cooking. He’s been able to crack an egg with his feet ever since he was six.

‘Every Saturday morning, we cook together. He makes pancakes, bacon and egg, burritos and peanut butter and jelly sandwiches.

‘Even though his feet are extremely strong, lids can be difficult to get off.’

Most of the muscles in Devin’s shoulders do not work, and he is forced to walk on his tip toes.

He increasingly relies on a wheelchair to help him get around school. And he has experienced bullying with cruel children mocking his arms.

Ms McLane said: ‘Kids used to call his arms “T-Rex arms” because they were tiny and they said he had “baby hands”.

‘He would cry and I would hold him. I told him that some kids are just mean and that everyone has to deal with bullying.’

But the resilient teenager won’t allow the condition to hold him back – he is even a member of Stevensville High School wrestling team, using his lower body strength to overcome opponents on the mat. 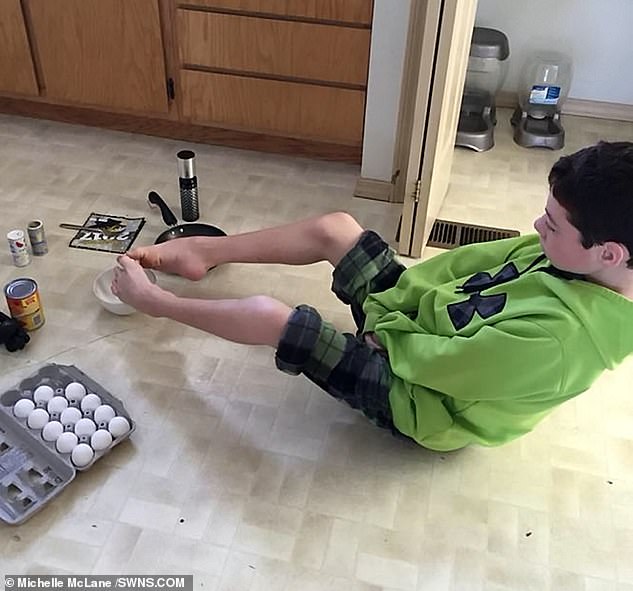 Devin makes breakfast with his mother, including pancakes, by cracking eggs with his feet

‘During my first year of practice, the coach tied one of my teammate’s arms to his side and asked him to wrestle me so that he could see what it’s like.’

The aim of a wrestling match is to pin an opponent by forcing their back and shoulders onto the mat.

The ninth grader said: ‘I avoid getting pinned and use my legs and lower body to get on top of them and pin them to the mat.’

He also enjoys archery and can fire a bow with a twitch of his toes.

Ms McLane has raised her son to believe he is capable of anything able-bodied kids do.

She said: ‘People your entire life are going to tell you what you should do but I tell Devin: “Son, never let anyone tell you that you can’t do something”.’

Devin said: ‘There have been some challenging moments.

‘It was difficult learning how to grip stuff and making sure I didn’t burn my feet, knowing which burner is which.’ 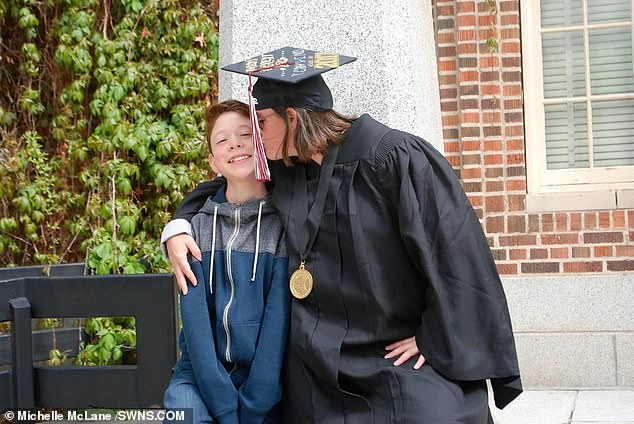 Ms McLane, pictured with Devin at her graduation from the University of Montana, said Devin can even paint using his feet 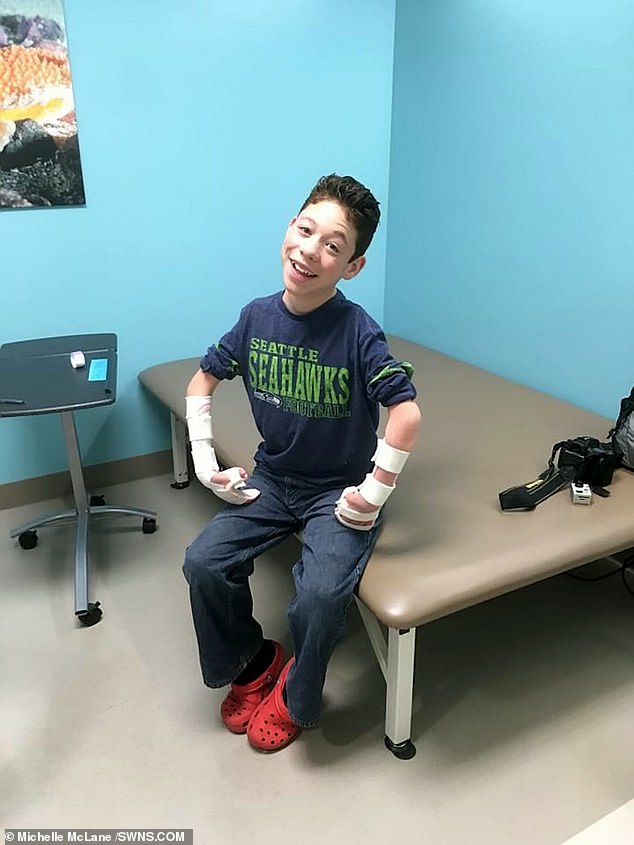 The teenager has been raised to believe he is capable of anything, and would like to be an architect when he’s older. Pictured, in hospital for a check-up

Devin, who can use his feet to write his schoolwork and create art, plans to become an architect.

Ms McLane said: ‘He loves doing art. He just has a passion for it.

‘Recently he did this beautiful picture of Russell Wilson, the quarterback for Seattle Seahawks. It was black and white, with shading. It was beautiful.’

Devin said: ‘I have a favourite quote from Dr. Seuss: “Why try to fit in when you were born to stand out?”‘

There is no cure and sufferers rely on treatments to ease stiff muscles and develop strength in other areas of their bodies to help them complete everyday tasks.