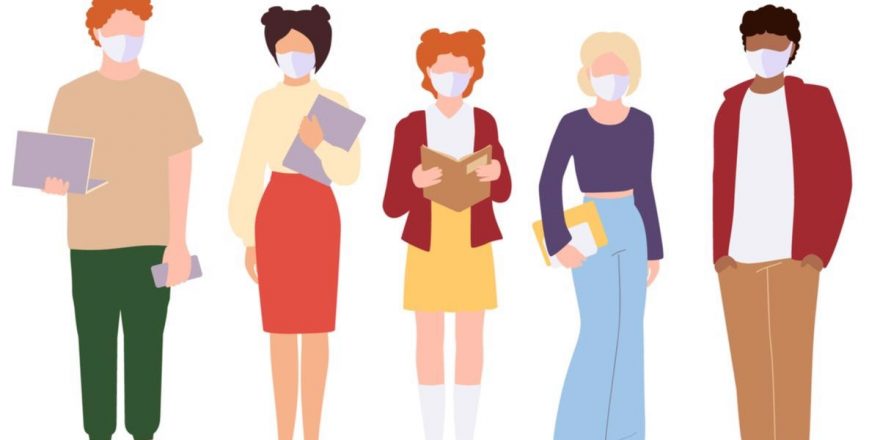 The studies have revealed that the use of facemasks prevents the release and inhalation of viral particles. Therefore, proper use of facemasks could reduce virus transmission and protect individuals from the virus.

In many countries, non-pharmaceutical interventions (NPI), such as the mandatory use of face-covering masks (FCM), have been implemented by public healthcare policymakers to manage the rapid spread of the COVID-19 virus.

Some countries implemented FCM mandates in schools, and the recommendation of the World Health Organization (WHO) and the European Centre for Disease Prevention and Control (CDC) had been that children over 12 years of age or those present in conditions of high community transmission were required to wear masks. The findings of previous studies that evaluated the effectiveness of wearing masks in schools were inconsistent because of various limitations and confounders.

Researchers believe that randomized controlled trials (RCT) could be a favorable strategy to elucidate the effectiveness of such policies, although they are difficult to perform in schools. In September 2020, face-to-face tuitions, using NPI methods, were implemented in Catalonia, Spain.

A new study posted to The Lancet* preprint server has evaluated the role of the mandatory use of FCM to control SARS-CoV-2 transmission in schools. In this study, researchers designed a retrospective population-based cohort, where the data was obtained from the official census of school age children in Catalonia, connected the regional central database of reverse transcriptase-polymerase chain reaction (RT-PCR) and lateral flow tests (LFT) for SARS-CoV-2.

Researchers revealed that during the study period when one positive case was detected by the healthcare systems; the whole bubble group was immediately quarantined for a 10-day period. Additionally, all children in the study group were tested with an RT-PCR four to six days after they came in contact with the COVID-19 positive person. Additionally, they further performed a second test if symptoms appeared despite having a negative COVID-19 test. This study was conducted during the first term of the 2020-2021 academic year.

The first trimester of the 2020-2021 academic year exhibited an age-dependent COVID-19 transmission in schools, with no significant differences between children under six and older children. During this period, Delta was the dominant circulating strain and vaccination rates were quite high among teachers and eligible students. Scientists compared the incidence of SARS-CoV-2 secondary attack rates (SAR) and the effective reproductive number (R*) among school children between the ages of 3 and 11. They compared children without mandatory FCM in the preschool stage and primary school children, where mask usage was compulsory.

There was no significant difference between P5 and year 1 of primary education in terms of transmission indicators, despite the difference in the FCM mandate. The observed SAR and the R* values, however, suggested that P5 could have transmission values slightly higher than those expected (P3 and P4 data suggested lower values than expected).

The youngest children had significantly lower transmission indicators, compared to other groups and they showed much lower proportions of circulating monocytes and dendritic cells. Researchers concluded that the innate immune differences between infected children and infected adults were most evident in infants and preschool-age children. Further, more cross-reactive T cells in younger children, compared to adults or those at advanced stages of childhood, were observed. For children aged between six and eleven years, the variation of incidence, SAR, and R* with age suggested a linear relationship. The results obtained in this study are broadly in line with others, conducted in the UK and the USA, which analyzed the impact of mask-wearing policies for students in educational settings.

Given the difficulty in conducting RCT in such settings, the quasi-experimental method was the best possible approach to the aim of the study. The study benefitted from homogeneous and well-defined treatment and control groups, which differed only on the basis of mandatory use of FCM. The results on age-dependency proved that age was the most important variable, which was also consistent with data from previous research.

The study also had certain limitations. Researchers performed an intention-to-treat analysis, which meant that there might have been children in P5 who did not use facemasks and also children in primary school who did not use masks or used them in an incorrect manner.

Although the treatment and control groups were constructed very well, there could still be factors that were not considered, such as classroom dynamics or the density of students in the classroom. Scientists also could not rule out overreporting of study outcomes and that a higher proportion of asymptomatic infections in younger children might have led to more asymptomatic cases.

Preprints with The Lancet publish preliminary scientific reports that are not peer-reviewed and, therefore, should not be regarded as conclusive, guide clinical practice/health-related behavior, or treated as established information.

Priyom holds a Ph.D. in Plant Biology and Biotechnology from the University of Madras, India. She is an active researcher and an experienced science writer. Priyom has also co-authored several original research articles that have been published in reputed peer-reviewed journals. She is also an avid reader and an amateur photographer.