Home » Health News » Teen Tobacco Use Is Skyrocketing Due to E-Cigarettes, Says CDC 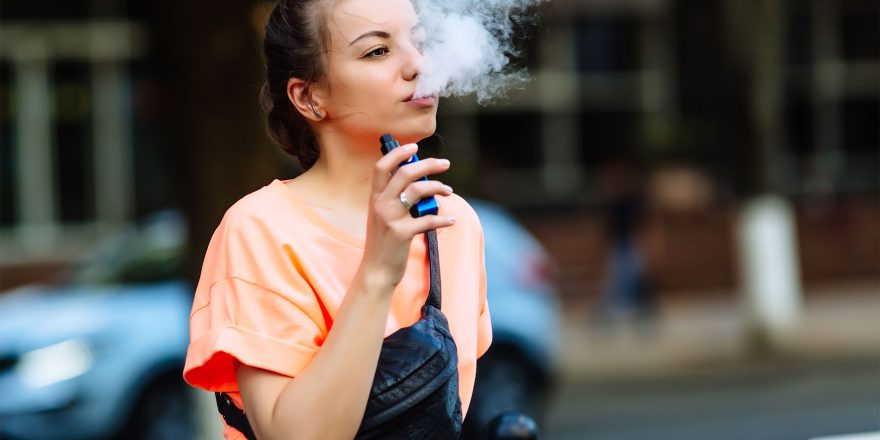 Teen Tobacco Use Is Skyrocketing Due to E-Cigarettes, Says CDC

Teen use of tobacco products is up 38.3 percent in the last year, and e-cigarettes are to blame, says the Centers for Disease Control.

The increase can be entirely attributed to e-cigarettes, since the use of all other tobacco forms stayed stagnant while e-cigarette use went up by 1.5 million. They are also the most popular type of tobacco among teens — 20.8 percent of high school students report using e-cigarettes, while traditional cigarettes follow behind at 8.1 percent.

E-cigarettes were initially thought of as a way for adult smokers to quit traditional cigarettes, but they’ve instead led to a major growth in teen use. This is particularly frustrating for CDC officials, who had finally seen a reduction in teen tobacco numbers.

“The skyrocketing growth of young people’s e-cigarette use over the past year threatens to erase progress made in reducing youth tobacco use. It’s putting a new generation at risk for nicotine addiction,” CDC Director Dr. Robert R. Redfield said in a statement. “Despite this troubling trend, we know what works and we must continue to use proven strategies to protect America’s youth from this preventable health risk. Youth use of any tobacco product, including e-cigarettes, is unsafe.”

The CDC says that the rising numbers are in line with Juul sales, and that the device is the most commonly sold e-cigarette in the U.S. They believe students primarily use Juuls because of their design, which looks like a USB flash drive and can be easily concealed. Juuls also come in fruity flavor pods that appeal to teens. Yet each one has the nicotine equivalent of a pack of cigarettes.

The Food and Drug Administration is cracking down on the makers of Juul and other e-cigarettes, and required the companies to come up with plans to drastically reduce the number of teen users. After the FDA raided Juul’s headquarters in October, the company announced that they would stop selling their flavored pods in stores and end all social media marketing.

However, FDA commissioner Dr. Scott Gottlieb called out Juul on Friday in light of Marlboro-maker Altria’s decision to invest $12.8 billion in the company, and its plan to get Juuls into more stores with better shelf placement.

“I’m concerned,” he told CNBC. “Did something change? Do they have new data? Do they have a new understanding? Because they just made a very big commitment to support the expansion of pod-based products, which they said contributes to the youth epidemic.”

Gottlieb also commented on the new statistics from the CDC on Monday.

“These data are a sobering reminder of the rampant rise of youth e-cigarette use. I fear this trend will continue in 2019, forcing us to make some tough decisions about the regulatory status of e-cigarettes,” he said. “No child should be using any tobacco or nicotine-containing product and we’re committed to reversing this epidemic.”