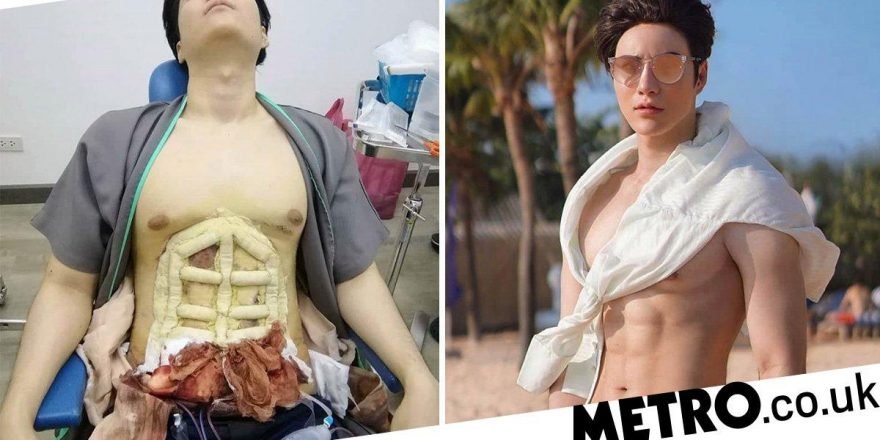 Thai man has liposuction to sculpt a six pack

The procedure involves liposuction to remove fat from specific parts of the stomach, which is pressed to the stomach to later reveal the natural abdominal lines.

There is no plastic or silicone included in the treatment.

Those who decide to get the six-pack liposuction will need to maintain a healthy lifestyle after they’ve had the surgery.

Pangpaparn said that he decided to spend £3,000 for the six-pack surgery to perfect his body because exercise could not make him look how he wanted.

He had pictures taken to show his body during and after the abdominal surgery.

In some of the images, you can see Pangpaparn’s abdomen covered with bandages and wounds from the surgical cuts where the fat was removed.

The client said: ‘I have been working out for many years but I want to my abs line to be more defined, so I did the surgery.

‘It will make my body always look good even though I will gain a little fat. I am happy this way.’

Six pack surgery has been increasing in popularity for the last four years in Thailand where tourists come to have other types of cosmetic surgeries performed.

In 2018, a similar clinic also promoted by Pangpaparn Ounvilai caused controversy when it unveiled a penis whitening procedure for body-conscious Thai men.

MORE: Fat donated by liposuction patients is being turned into body soap

The daily lifestyle email from Metro.co.uk.