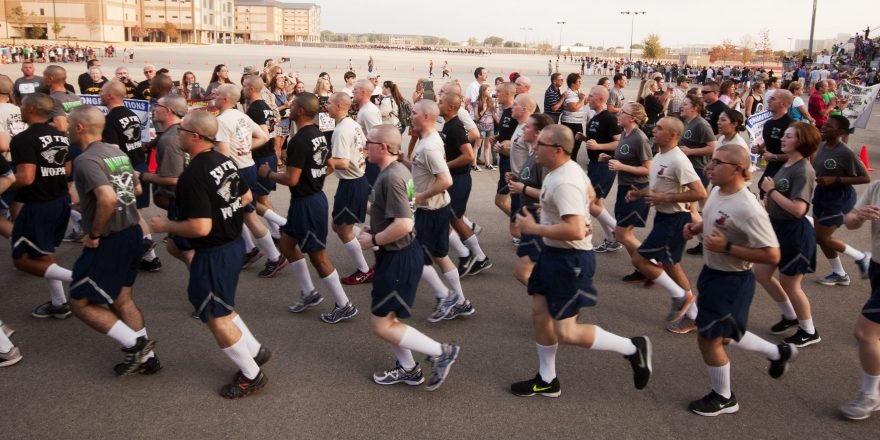 The Air Force Might Introduce a Gender-Neutral Fitness Test

A gender-neutral fitness test with running at its forefront might be coming to the military: The Air Force’s exercise science unit is considering a running-based test that will use VO2 max to hopefully give a more accurate representation of true fitness levels, the Air Force Times reports.

By eliminating gender-specific scoring that includes certain exercises like situps and pushups, the new test could enable all service members to be measured equally in their fitness, regardless of gender.

Neal Baumgartner, Ph.D., head of the Air Force’s exercise science unit, shared the new concept in a meeting of the Defense Advisory Committee on Women in the Service (DACOWITS) on Tuesday. He announced that the unit was in the early stages of determining interest in changes to the current fitness-fatness index (FFI), which could possibly create a metric for a single number that measures a member’s fitness.

There is an “inextricable link between aerobic fitness and body composition,” Baumgartner told Air Force Times. “We’ve got to teach our airmen that.”

The proposed test would use the measure of a person’s VO2 max—how efficiently the body uses oxygen while running—as the numerator in the formula. They would then divide that by the denominator, which would be the person’s waist circumference divided by height. (Previous research has shown that waist-to-height ratio is a better predictor of obesity and visceral fat than other methods, like body mass index (BMI).

The example that Baumgartner used in the meeting was a service member running a mile and a half in 10 minutes and 23 seconds. That time would indicate a VO2 max score of 50, which would be on the fitter end of the scale. If he had a waist circumference of 35 inches and a height of 70 inches, the denominator would be 0.5. Taken together, that would give a score of 100—the “fitness-fatness index.”

So a quicker run could help balance out the effect of a less-than-desirable waist-to-height ratio.

The overall score would ultimately measure the link between aerobic fitness and body composition, according to Baumgartner. And the hope would be that the new test could provide a level playing field to all service members, regardless of gender.

The current Air Force fitness test includes a 1.5-mile run with maximum pushups and situps in one minute, with points given for each category. According to Military.com, Baumgartner said that the proposed test would do away with those two exercises in favor of others that are more scientifically-linked to fitness, though what they may be hasn’t yet been determined.

There is currently no timeline for moving forward with the new fitness test, though early feedback has been encouraging, he said.

From: Runner’s World US