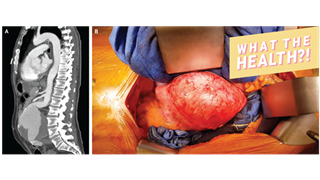 We all know what it’s like to feel bloated. Maybe you’ve even had to seek medical care because of that awful feeling. That’s what happened to a 66-year-old man featured in a case report published today by the New England Journal of Medicine.

We’re guessing that when this patient went to the ER because of persistent abdominal bloating and constipation over the previous two months, he had no idea the cause was a dangerous aortic aneurysm measuring 11 by 10.5 by 14 centimeters.

But what exactly is an aortic aneurysm, and how does it happen? And what does it mean for the patient, besides bloating and constipation?

According to the American Heart Association, an aortic aneurysm is a “weakened or bulging area on the wall of the aorta, which may occur anywhere along its length.” In other words it’s essentially a ballooning of the aorta, the largest artery in the body. (It runs from the heart down into the abdomen.)

Two scary complications can occur as a result of an aortic aneurysm. The aneurysm could rupture, causing blood to leak elsewhere in your body. Or, something called a dissection could occur. “The blood pumped forcefully through the aorta can split the layers of the artery wall, allowing a build-up of blood to continually leak into the space,” the American Heart Association explains.

With that in mind, it sounds like the patient featured in the new case report was very lucky he sought medical care when he did. A physical exam revealed a painless, pulsating mass in the man’s abdomen, his doctors wrote, and he was diagnosed using a technology called tomographic angiography.

“The patient underwent surgery, during which the aneurysm was exposed and replaced with an aortobiiliac graft,” the report says. (A graft is a piece of live tissue transplanted into a patient by way of surgery.) At a 6-month follow-up visit, the mass was gone, the patient had good blood circulation throughout his body, and most importantly, he felt better.

Aortic aneurysms are usually treated one of two ways, according to the American Heart Association. The first is through a surgical operation, the goal of which is to replace or fix the injured part of the aorta. The second is via medications that can lower a person’s blood pressure and reduce the risk of their aneurysm rupturing.

If you’ve felt a little bloated recently, you shouldn’t worry—aortic aneurysms are very rare. There are only 5 to 10 per every 100,000 people in the United States, according to Columbia University Irving Medical Center. If you continuously feel bloated over a long period of time, though, it can’t hurt to talk to your doctor about it.