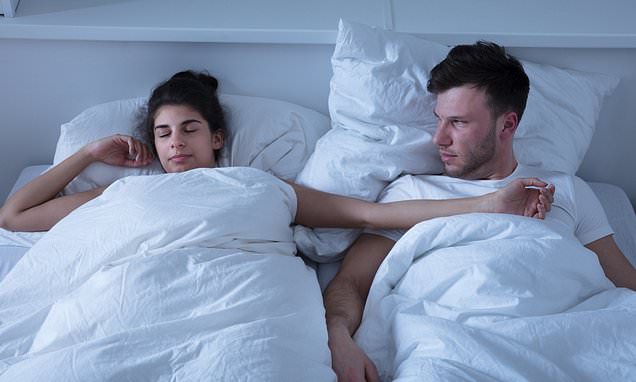 The real reason your other half lashes out in their sleep

In the last part of our compelling series, a sleep expert reveals the REAL reason your other half lashes out in their sleep

A couple of years ago, I met a patient who seemed to suffer violent ‘night terrors’.

He shared a bed with his wife who had osteoporosis (meaning her bones fracture more easily), and was worried he would accidentally injure her.

John was in his 80s and still working. He told me his story in a soft, deliberate manner, despite the obvious angst it caused him. His wife Liz sat next to him, elegant and equally gentle, and explained the final straw that made them seek medical help.

She said: ‘He’d moved to my side of the bed and grabbed my arm — then his nails went in. I jumped out of bed, screaming. I was shaking and crying: “We can’t do this any more.” ’

It was at this point that they resigned themselves to separate beds. 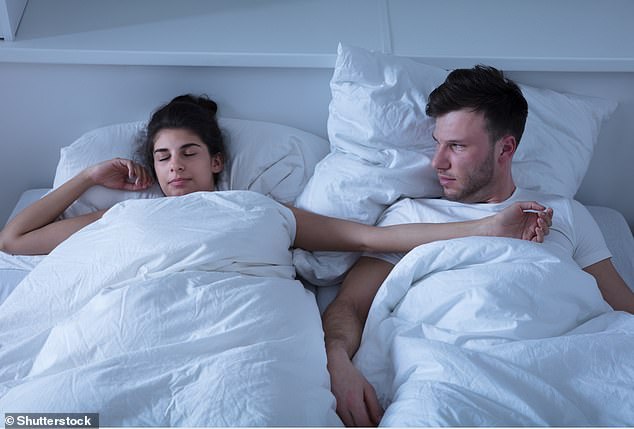 Did you know? In some patients, RBD is thought to have been triggered by certain medications, predominantly antidepressants

‘Occasionally, he would kick me with such ferocity that it was as if a horse or a donkey had lashed out,’ Liz said. ‘It would be so unlike John. I very rarely see him angry, but at night when he is asleep he is angry and frightened.’

John grimaced on hearing what he had put his wife through for several years. ‘I was having dreams about things — such as being chased by a tiger, or bitten by a snake,’ he said.

Most of our dreaming, particularly dreams like those John describes — with clear narrative content — arise in a stage of sleep termed REM (rapid eye movement) sleep.

Normally in this stage of sleep our bodies are largely paralysed, stopping us acting out our dreams. So why did this paralysis not set in for John?

It sounds similar to sleepwalking or night terrors — when someone starts screaming, crying and/or thrashing around in the night, sometimes with their eyes open.

People often get out of bed, can hold limited, if odd, conversations, and their eyes will be open as they sometimes act out complex tasks. I’ve seen patients who eat, cook, rewire household appliances, urinate and, memorably, ride motorbikes, in their sleep. 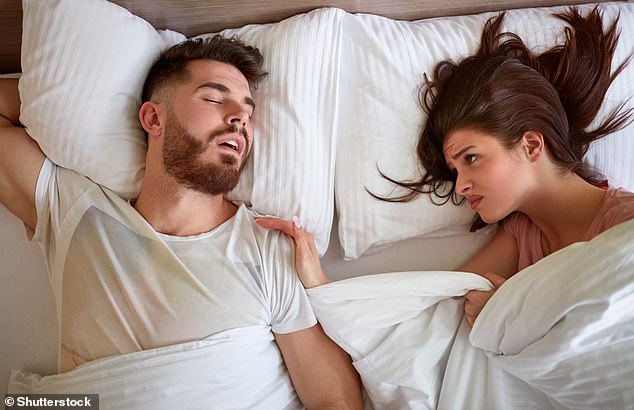 Warning: Perhaps the most common cause of RBD is degenerative brain disorders such as Parkinson’s disease or a related condition called Lewy body dementia

However with RBD, the eyes are closed, and the flailing or lashing out movements often appear purposeless. There is little interaction with the external world, and speech is often fragmented and incoherent.

Another key difference between RBD and sleep walking is the timing. Sleepwalking and night terrors occur in the deeper, non-dreaming stages of sleep — most of our deep sleep is in the first half of the night, and most of our REM sleep is in the latter half.

So, while sleepwalking and night terrors often occur in the first few hours of sleep, RBD is much more likely to happen in the few hours before waking.

So why do people with RBD not experience the normal muscle paralysis seen in dreaming sleep?

Early studies in animals suggested that this is due to damage to the brainstem, the conduit of all brain signals to the rest of the body and the part of the brain that causes paralysis during REM sleep. It is very rare to see RBD as a result of damage to the brainstem in humans, although I recently saw a young man with a tumour of the midbrain and brainstem, who vigorously acted out his dreams.

In some patients, RBD is thought to have been triggered by certain medications, predominantly antidepressants.

The brains of people with Parkinson’s and Lewy body disease, when studied under a microscope, show deposits of a protein called alpha-synuclein. 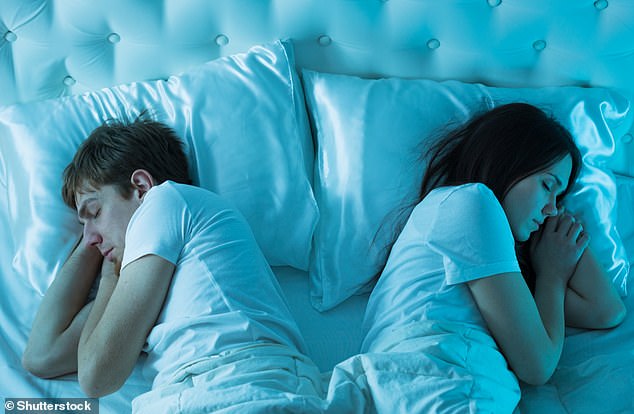 REM sleep starts in the womb. In fact, as we enter the third trimester of our development, almost all our time is spent in this brain state, at least in premature babies born at this stage

When this is deposited in the basal ganglia, an area deep in the brain crucial to the control of movement, it causes the familiar features of Parkinson’s disease, such as tremors, slow movement and walking difficulties.

But studies have shown these protein deposits elsewhere in the nervous system, including the brainstem, which is responsible for paralysis during REM sleep.

In fact, these changes are seen in people years, or even decades, before the more obvious onset of these degenerative conditions.

In other words, it can be a very early warning sign.

Of course, not everyone who has RBD goes on to develop Parkinson’s. But if we can use the condition to predict who may be at a high risk, this gives us a window of opportunity to start treatment.

The mainstay of treatment used to be a sedative called clonazepam, a benzodiazepine similar to Valium, which for some people works very well.

It works by suppressing these movements in REM sleep, however, it can have side-effects, and can leave people feeling groggy and lethargic in the morning.

In recent years, we have started to use melatonin — a synthetic version of the hormone that makes us feel sleepy. This gentler option seems to work for a significant proportion of people with RBD, with fewer side-effects.

John has been on melatonin now for a number of months, with some benefit, and he and Liz live in hope that they will get to the point where they can sleep in the same bed again.

WHY DO WE DREAM?

We used to think dreaming only happened during REM sleep — we now know that some less complex, dream-like images occur in other stages of sleep.

However, most of our proper dreaming, the kind that has a narrative and that people may remember, happens in REM sleep.

REM sleep starts in the womb. In fact, as we enter the third trimester of our development, almost all our time is spent in this brain state, at least in premature babies born at this stage.

Even after birth, a third of each 24-hour period is spent in REM sleep. Harvard sleep physicians have suggested that this ‘dreamless REM sleep’ (because what could 28-week old foetuses, with no experience of the outside world, be dreaming of?) is fundamental to the development of the degree of consciousness that differentiates us from other species.

But REM sleep persists throughout our lives, so this cannot be the whole story.

Another theory is that it is fundamental to the regulation of mood and one’s psychological state. While initial studies disrupting the REM sleep of volunteers showed that, after a few days, people began to experience significant problems with mood, other studies have since pointed to REM and non-REM sleep being equally important.

To confuse matters, a single night of preventing REM sleep in people who are depressed can improve their mood. So this is not entirely convincing.

There is evidence of REM sleep being fundamental to learning, however. Research has shown that important abilities such as recognising the emotions expressed by faces, maze navigation and creative thinking are all facilitated by REM sleep.

YES, YOU CAN SNOOZE ON YOUR FEET

We used to think the brain could be either awake or asleep, nothing in between.

But, in recent years, we have learned that deep sleep and full wakefulness lie at the extremes of a spectrum, and different areas of the brain can be in different states simultaneously.

This seems to be what is at play during para- somnias, such as sleepwalking.

In recent years, it has become apparent that this mixed awake-asleep brain state doesn’t just happen at night.

‘Local’ sleep activity only affecting small areas of the brain can occur in full wakefulness. When rats are kept awake for prolonged periods, nerve cells in the cerebral cortex (the outer layer of the brain involved in thinking and language) fall silent for brief periods, in the same way as they do in deep sleep.

These ‘off-periods’ are associated with increased errors during certain tasks.

Similarly, when sleep-deprived, the awake human brain exhibits changes in activity, meaning that when we are tired, we really are ‘half-asleep’, or perhaps, more accurately, ‘one-tenth asleep’. These changes would certainly explain why we feel less capable when sleep-deprived.

Creativity and dreaming have long been linked — Mary Shelley dreaming up scenes from Frankenstein, and Keith Richards waking up with the opening bars to Satisfaction in his head are frequently quoted examples.

So, maybe REM sleep has the power to coalesce multiple memories, disparate experiences, and integrate them into a work of genius?

Or there could be a more practical explanation.

One peculiarity of REM sleep is that, unlike every other moment of our lives in which our body temperature is kept absolutely stable: in REM, it drops.

This is a highly dangerous state as even small fluctuations in temperature can result in our brains not working properly, or heart rhythm abnormalities.

Evolution is no fool, and this implies that REM sleep, and loss of our internal thermostat, must have a crucial function.

There is a safety cut-off though: if we are cold, we will not enter REM sleep. One explanation is that in REM sleep we are fixing the system that regulates temperature.

It’s like when you take a car to a mechanic, he runs it with the wheels off the ground. He stops it working normally to fix it. Maybe by taking the system that maintains us at a steady 37c offline, it provides a chance to tweak it.

And, as one Harvard professor suggested to me, it could even be that someone who permanently ‘feels the cold’, even in warm rooms, is not getting enough REM sleep.

Dr Guy Leschziner is a consultant neurologist and sleep physician at Guy’s Hospital in London.