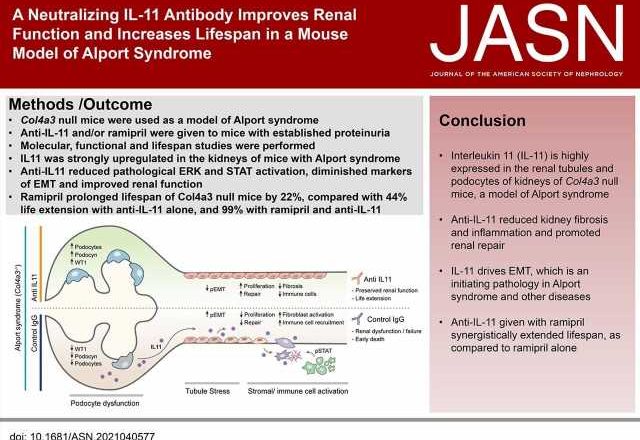 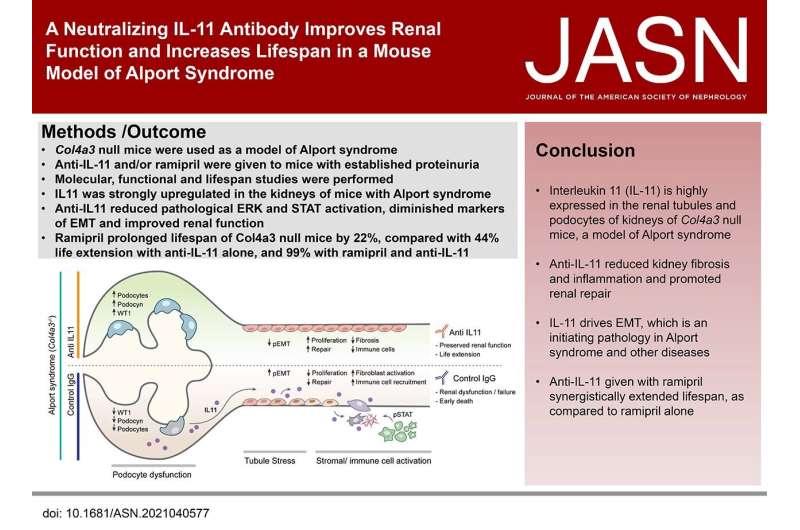 A treatment strategy using an antibody that inhibits a cell signaling protein called interleukin-11 (IL-11) could lead to new hope for people with a debilitating genetic kidney disease called Alport syndrome. Scientists from Duke-NUS Medical School, Singapore, reported these findings in the Journal of the American Society of Nephrology.

Alport syndrome is an inherited genetic condition that affects approximately one in every 50,000 newborns globally. The gene mutations linked to this syndrome lead to abnormal collagen formation in certain tissues, affecting kidney function, hearing and eyesight. Chronic kidney failure can eventually result, due to damage and scar tissue formation in the glomerulus, the filtering unit of the kidney responsible for removing toxins while retaining important proteins.

Currently, there are no curative treatments for the condition. Instead, doctors attempt to reduce the rate of kidney damage with angiotensin-converting enzyme inhibitors (ACEi). These drugs lower blood pressure and reduce leakage of protein into the urine. However, many individuals with Alport Syndrome progress to end-stage kidney failure despite treatment with ACEi.

Lead author of the study, Dr. Anissa Widjaja, an assistant professor with Duke-NUS’ Cardiovascular & Metabolic Disorders (CVMD) Program, said, “Together with our collaborators in Singapore and Germany, we wanted to find out if IL-11 played a role in Alport syndrome disease development. This cell signaling protein had recently been implicated by other research in kidney scarring and dysfunction.”

Using a mouse model of Alport syndrome in humans, the team found that IL11 levels began to rise in the test animals by six weeks of age causing damage to glomerular cells that make up the filtering sieve lying between the incoming blood and the outgoing urine.

“We also found that administration of anti-IL11 therapies, in the form of an antibody drug, has beneficial effects in reducing the severity of Alport syndrome in the mice,” Asst Prof Widjaja and Professor Stuart Cook, the senior author of the study, elaborated. “This happened by reducing kidney injury, inflammation and scarring. Importantly, combining ACEi and anti-IL11 therapies increased the lifespan of Alport syndrome mice by more than 400 percent relative to those that were treated with an ACEi drug alone.”

Professor Thomas Coffman, dean of Duke-NUS Medical School and a senior co-author of the study, commented, “This discovery spells new hope for treatment in Alport syndrome—not just to arrest the progress of the disease, but even to restore lost kidney function. Also, the study suggests that anti-IL11 therapeutics can have additive effects with ACEi treatment, enhancing its potential utility in the clinical arena.”