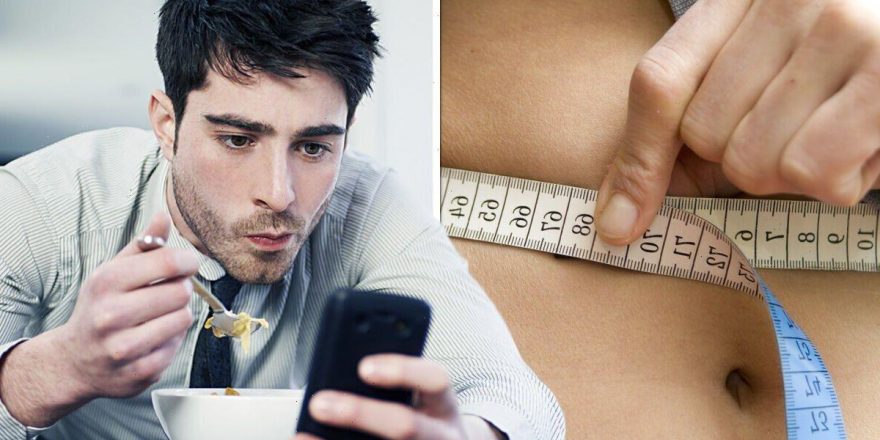 There is a widely held belief that visceral fat gain increases with age, but this theory has been widely discredited in recent work. Fat that gets stored inside the abdominal cavity typically results from an overload of calorie intake, coupled with a sedentary lifestyle. Certain eating habits, however, could lead to an overconsumption of calories, according to researchers.

Obesity is an ever-growing health challenge that is inextricably linked with other poor health outcomes, like diabetes.

Occasionally, hormonal balances can lead to an accumulation of excess fat, but lifestyle factors remain the primary cause of the condition.

In 2019, scientists warned that using a smartphone at mealtimes could lead to an expanding waistline.

The team hypothesised that phone use led to a calorie overload by preventing the brain from registering how much food was being ingested.

READ MORE: Visceral fat: ‘Getting enough sleep’ may be a key factor to lose weight

This distraction, said the researchers, led women and men to consume 15 percent more calories than is recommended.

Doctor Elisabeth Philipps, from the health and wellness brand Fourfive, says: “It’s not just what you eat but how you eat that’s important.

“Eat your meals sitting down and avoid using your phone at the same time.”

The study was conducted on a sample of 62 volunteers, aged 18 to 28, who were filmed eating alone.

Participants were asked to choose from a selection of food – which included healthy and unhealthy products – till they were full.

The study was broken down into three trials, where volunteers were recorded eating with no distractions, reading a magazine, or using a smartphone.

Findings later revealed that without the distraction of their smartphone devices, the participants ate an average of 535 calories, compared to 591 when using their phones.

The health detriments of phone use have been explored in previous work, with substantial evidence pointing to excessive phone use as a driving cause of sedentary behaviour.

There are many other causes for weight gain, however, and some are less conspicuous than others.

Harvesting healthy bacteria in the gut, for instance, can prevent the onset of further complications related to weight gain.

In fact, research by King’s College London in 2019, found that gut microbiota can affect a person’s visceral fat mass regardless of their dietary intake.

The expert explained: “Make sure you chew your food thoroughly, taking at least 15 minutes to eat a meal.

“Manage your stress, such as stressful conversations, work or reading the news, especially while you’re eating.

“Stress reduces digestive juices in the gut and also reduces blood flow in the gut making digesting difficult, leading to symptoms such as bloating and ingestion.”