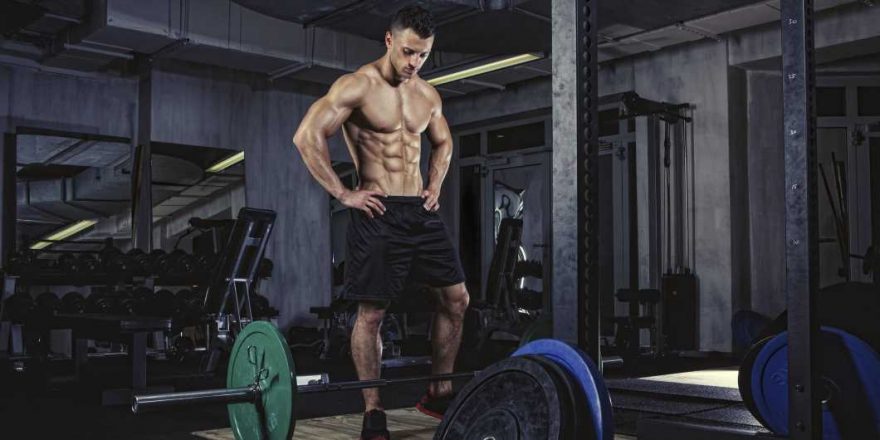 Most guys don’t read the instruction manual that comes with the IKEA bookshelf—we just start fiddling with the pieces until they fit together. Unfortunately, that cocky “I got this” attitude doesn’t work when you’re trying to build a better body. If you’re not willing to take a little direction, you could be shoving square pegs into round holes a long time before you see any progress.

And I got so frustrated, in fact, that I made it my career to learn from the best fitness experts in the world so that I wouldn’t have to waste any more time and effort. As a fitness journalist, I’ve picked every great brain in strength and conditioning for the most effective techniques to build muscle, shred fat, and improve performance, and condensed them all into the Men’s Health Encyclopedia of Muscle. It’s the ultimate reference guide to help you get in the shape of your life, and—best of all—it’s not in Swedish!

Since writing the book, my training has been safer, efficient, and more fun than ever. Here are five things I’ve learned that helped me get in the best shape of my life, based on wisdom from 5 of the 20 experts I interviewed for the book.

5 Strong Tips to Get You Into Peak Shape

1. Have Your Mind On Your Muscles

The mind-muscle connection is an old theory among bodybuilders stating that, if you visualize the muscles you want to grow while you train them, they’ll respond accordingly. I had always thought it sounded a little woo-woo, but recent research has shown it works, and former pro bodybuilder Ben Pakulski—whose 280-pound physique was one of the most imposing in the world—convinced me to give it another shot.

Making a mind-muscle connection isn’t just about visualizing the muscle, says Pakulski, but thinking about what it’s actually doing when you lift. “All muscles do is pull one end closer to another end,” he says. “When you train, picture what the muscle insertion looks like, and how you’ll bring that closer to the origin.” So, if I’m training chest, I’ll imagine the outer edge of my pec (where it attaches to the upper arm bone) drawing toward my breastbone, and then pulling away on the negative portion of the rep when I’m lowering the weight. It doesn’t hurt to fantasize about your muscles growing as big as the Swiss Alps, like another bodybuilder (I think his name was Schwarzen-something) used to advise, but thinking about what they’re doing while you’re using them helps you to activate the muscles better.

2. Hold Back A Little

I know it seems manly and hardcore to take every set to failure (the point at which you can’t lift the weight anymore), but I can’t think of a single strength coach who recommends doing so more than once in a long while. It’s OK to go all-out from time to time to test yourself, but doing it regularly will get you injured and harm your ability to recover. If you hold back a little (or even a lot) on your sets, you’ll find that you get more out of them.

Try a technique called cluster training that I learned from Jim Smith, co-creator of the Certified Physical Preparation Specialist certification. The next time you plan to do something like four sets of 10 reps, break the workload in half. Do a set of 5 reps, rest 30 seconds, then another set of 5, and rest 90 seconds. Repeat that four times. You’ll do the same total amount of work as the classic four sets of 10 approach, but it won’t feel as tough, because you get to rest after only five reps (one “cluster”). You won’t build up as much fatigue as you do with longer sets, and your form won’t suffer as a result. You’ll have a better chance of performing every rep of every set proficiently—and you’ll be able to use the most challenging weights throughout. Most of the time when you do four sets of 10, you’ll get two sets with a heavy load and then have to reduce the weight for the last set or two because you’re worn out. This method allows you to finish strong, so that your muscles get the greatest possible stimulus.

Cluster training is demanding on your body, though, so Smith advises you use it sparingly. “I cycle it periodically,” he says. “A three to four-week block of cluster training seems to ensure a maximal training effect.”

One of the most frequently asked questions I get is, “How many sets should I do for an exercise?” For years, I thought the best answer I could give is “it depends,” which is true, but isn’t very helpful. Bill Hartman, P.T., C.S.C.S., co-owner of Indianapolis Fitness and Sports Training, has a better answer: as many sets as you can on that given day.

Decide how many reps you’re going to go for on an exercise and estimate the weight you’ll be able to use. For example, you may want to do dumbbell bench presses for 8 reps, and you think you can get them all with the 80-pound dumbbells. After you warm up, do as many reps as you can with the weight you’ve chosen, stopping the set the moment you feel yourself slow down or beak form. If you get all the reps you wanted with good speed and technique, keep doing sets with that weight. If, however, you fail to complete all your intended reps, the weight is too heavy for you on that day, and you should reduce it by five or more pounds. On the flipside, if you find you’re able to perform several more reps than you intended, increase the load. “It may take you a couple of tries to find the ideal weight,” says Hartman, “but that’s OK. You’re still challenging your muscles.”

Once you’ve got the right weight, use it for as many sets as you can until you see a dropoff (you come up three or more reps short of your goal number). At that point, it’s time to move on. You may end up doing one, two, or as many as six or eight sets, depending on how well recovered you are, but you can be sure it’s the exact number you’re capable of that day.

4. Do Both Kinds of Cardio

I’m old enough to remember when the word “cardio” meant only jogging, swimming, or cycling to most people (it was a simpler time…). In other words, any activity that would get your heart rate up to a moderate level and keep it there for a while. Since the dawn of the 21st century, many now seem to prefer high-intensity interval training (HIIT), workouts that alternate hard but short bouts of exercise with recovery periods. As I’ve come to learn, one style of cardio isn’t better than another—in fact, you need both to maximally train your heart and burn the greatest amount of fat.

Don Saladino, a New York City-based trainer to celebrities and athletes, recommends doing two days of interval training and at least one long, slow (aerobic) workout per week. One of your interval days should be really intense—sprinting, or battle rope slams, for example, done for 4 to 6 seconds, followed by rest until your breath returns to a pace that allows you to talk. Do 3 to 8 rounds like this. Your second interval day should be more moderate, such as 30 seconds of fast cycling on an exercise bike followed by 60 seconds of light pedaling. Repeat for 15 to 20 minutes. In your aerobic workout, jog or swim at a pace that keeps your heart rate between 120 and 140 beats per minute for 30 minutes or more. “Combine that with lifting three days a week,” says Saladino, “and you’ll get in really good shape.”

5. Be Kind To Your Muscles

Most think of getting a massage as a way to spoil yourself, but if you’re a hard-training athlete (that includes you, even if you just go to the gym a few days per week like me), it’s an essential part of your recovery and should be a regular part of your life. In lieu of getting real massages from a sexy masseuse, you can do them on yourself (kind of) using a foam roller.

Like a massage, the roller helps to increase blood flow to the muscles and rehydrate them, which improves their pliability and helps to remove toxins. Rest the muscle you want to roll on the roller and move your body so the roller applies even pressure along it. Sam Pogue, a trainer to pro athletes and VP of Brand at True Coach recommends rolling for 30 to 90 seconds, pausing on any spots that feel particularly tender. When you find these areas, breathe deeply and try to relax until they loosen up. Pay extra attention to your lats, thoracic spine (mid back), tensor fascia latae (on the side of your hip, from under the hip bone to about halfway to your knee), piriformis (the side of your butt cheek), and adductors (inner thighs). Says Pogue, “These are chronically tight in most people.”

For more workout tips and techniques, pick up the Men’s Health Encyclopedia of Muscle.