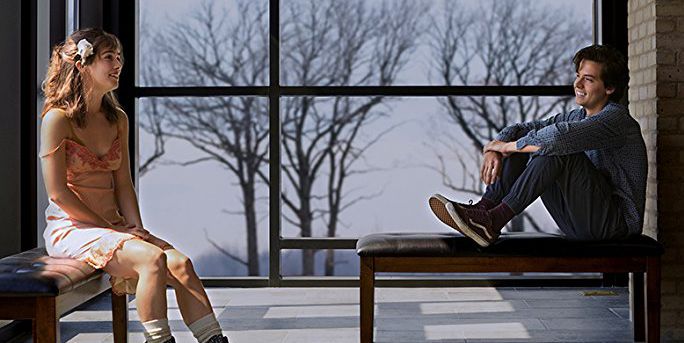 Why Relationships Are Risky for Two People With Cystic Fibrosis

Given the new movie Five Feet Apart—which is about two cystic fibrosis patients who meet in a hospital and fall in love (played by actors Cole Sprouse and Haley Lu Richardson)—you might suddenly be curious what the condition actually is. You might also wonder whether it really is risky for a couple with cystic fibrosis to be around each other. The answer is yes, but not necessarily for the reason you might think. Here’s a basic overview of the disease in the movie and how it compares to real life, including why CF patients can’t be around each other.

What is cystic fibrosis?

Cystis fibrosis (CF) is a life-threatening, inherited disease that causes progressive damage to organs including the lungs, pancreas, liver, intestines, sinuses, and sex organs. Affecting about 30,000 people in the United States and 70,000 people worldwide, cystic fibrosis is the most common lethal genetic disorder, says Mark Wylam, M.D., a pulmonologist and the director of the Mayo Clinic’s cystic fibrosis center. “Its main manifestation is chronic lung infection, which leads to lung destruction,” he says.

Fluid lines the lungs to help cilia (hair-like protrusions) sweep germs out of the airways to be swallowed or coughed up, explains Wylam. In people with cystic fibrosis, that layer is significantly reduced due to a gene mutation that causes a defect in a protein (cystic fibrosis transmembrane regulator, or CFTR) that moves salt in and out of cells. This causes the fluids in the lungs and other organs to be thick and sticky, so instead of moving things along, it plugs up tubes, ducts, and passageways. This traps germs, causing frequent, persistent infections. “You end up with essentially flypaper,” says Wylam.

People with cystic fibrosis may not have any symptoms for a long time, even as their lung function gradually decreases. Eventually, they’ll begin to cough and notice more mucus in their lungs—symptoms that are at first eased by treatments including chest physiotherapy and antibiotics. These symptoms increase in frequency while the germs in the lungs become increasingly virulent and resistant to antibiotics. That can lead to frequent hospitalizations, weight loss, functional decline, and eventually respiratory failure, says Wylam.

Men with cystic fibrosis are also born without a vas deferens, the tube that delivers sperm from the testicles to the penis. And at least two thirds of CF patients also have problems with their digestive system, says Wylam. Ducts in the pancreas can become blocked, reducing absorption of vitamins and nutrients and potentially leading to diabetes. And bile ducts in the liver can also become clogged, causing scarring of the liver and cirrhosis. Enzymes and supplements are very effective at treating digestive problems, and “the vast majority of patients are able to overcome these issues,” Wylam says.

Is cystic fibrosis contagious through kissing?

How and when is cystic fibrosis diagnosed?

In the US, all newborns are screened for cystic fibrosis within first few days of life, since early detection and treatment improves outcomes, says Wylam. Blood is drawn with a heel prick and screened for higher levels of a chemical known as immunoreactive trypsinogen, or IRT, created by the pancreas. If results come back positive, they’re followed up with genetic test to look for a few of the most common of the more than 1700 gene mutations that cause cystic fibrosis. Infants’ sweat may also be tested to check if it’s saltier than normal.

Newborn screening identifies the vast majority of cystic fibrosis, says Wylam, with over 75 percent of people with CF diagnosed by age 2. “However many less common mutations are milder and therefore more likely to be picked up later in life,” he says.

What are the symptoms of cystic fibrosis?

Symptoms of cystic fibrosis include:

In addition to chronic lung infections, complications of cystic fibrosis can include polyps (abnormal growths) in the nose, nutritional deficiencies, diabetes (which affects about 30 percent of people with cystic fibrosis), liver problems including gallstones, intestinal obstruction, osteoporosis, and dehydration caused by electrolyte imbalance.

Why can’t cystic fibrosis patients be around each other?

In 2013, the Cystic Fibrosis Foundation (CFF) came out with the “six-foot rule” to minimize cystic fibrosis patients’ exposure to bad bacteria. It states that starting at birth, people with cystic fibrosis should maintain a distance of at least six feet from other cystic fibrosis patients and people who are sick to reduce their risk of exposure to germs—the most dangerous of which can preclude a lung transplant. (The rule excludes people living in the same household, since they probably already share the same bacteria anyway.)

“When you cough or sneeze, 90 percent of bacteria is spread in about a four-foot bubble around you. If you increase that distance, you’re less likely to spread or share the germs with people who tend to collect that bacteria,” says Wylam. “When patients are congregated, germs spread. There used to be CF camps, but they’ve been disbanded those because kids would acquire germs they weren’t previously carriers of.”

The rule, however, doesn’t concern healthy people without cystic fibrosis, since healthy lungs can effectively clean out the most dangerous germs. “The bacteria we’re talking about are really only pathogenic for people with cystic fibrosis. Our natural defense and cleaning systems don’t allow us to have many germs. We’re exposed but not colonized,” says Wylam.

Can cystic fibrosis patients be in relationships?

Despite the six-foot rule, it isn’t necessarily unsafe for two people with cystic fibrosis to be romantically involved, says Wylam. Cystic fibrosis patients are tested at least every three months to identify the germs they’re carrying. If two people already share the same unfriendly germs, it wouldn’t be risky for them to be together. But if the lungs of just one person in the couple contain virulent germs, a romantic relationship could be risky for the other person. “You could always accept that risk,” Wylam says.

“People with cystic fibrosis can and do have physical relationships like anyone else,” says Michael Boyle, M.D., the senior vice president of therapeutics development at the Cystic Fibrosis Foundation. “But, because infections are so potentially dangerous for people with CF, they need to be more careful about avoiding germs and shouldn’t kiss a person who is sick. That is particularly true when it comes to two people with CF, where a physical relationship could pose a real threat to their health.”

How is cystic fibrosis treated?

“The most promising current treatment options involve new medicines which restore function of the cystic fibrosis protein, which results in the mucus in the lungs being more normal and improves some of the lung problems seen in CF,” says Boyle.

There is no cure for cystic fibrosis. Since thousands of gene mutations are involved, it’s difficult to find a single treatment that will work for every person with the disease, Boyle explains.

Treatment, however, can ease symptoms and reduce complications. “We are making incredible progress. In the 1950s, children with CF rarely lived long enough to attend elementary school. Today, thanks to advances in research and care, most people with CF live into adulthood and are reaching milestones that we never thought were possible,” says Boyle. On average, people with cystic fibrosis live into their mid- to late-30s, although many people today are living into their 40s and 50s. Respiratory failure is most common cause of death.

“In the future it may be possible to cure CF by either adding normal cystic fibrosis genes to lung cells using gene therapy, or by repairing the defective cystic fibrosis gene using gene editing,” says Boyle. “The CF Foundation is providing millions of dollars in funding to dozens of groundbreaking research projects to tailor the latest scientific discoveries to cystic fibrosis, with the goal of one day curing the disease.”