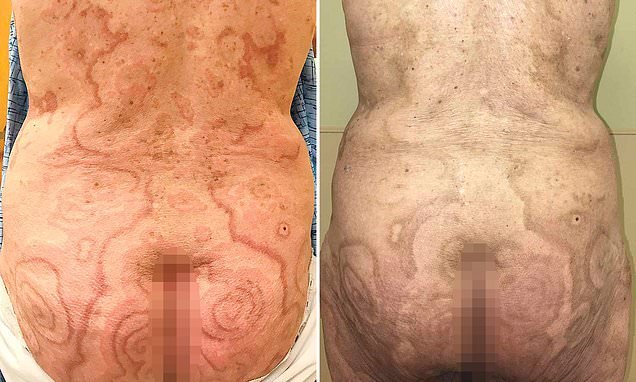 The 74-year-old, who is unidentified, had lived with the rash for almost a year before going to see a doctor.

She was given anti-histamines at first – but they didn’t make any difference. Her rash then became sorer and she started to suffer stomach pain, vomiting and diarrhoea.

The woman underwent treatment and is now in remission after her health scare, the doctors who treated her have now revealed. 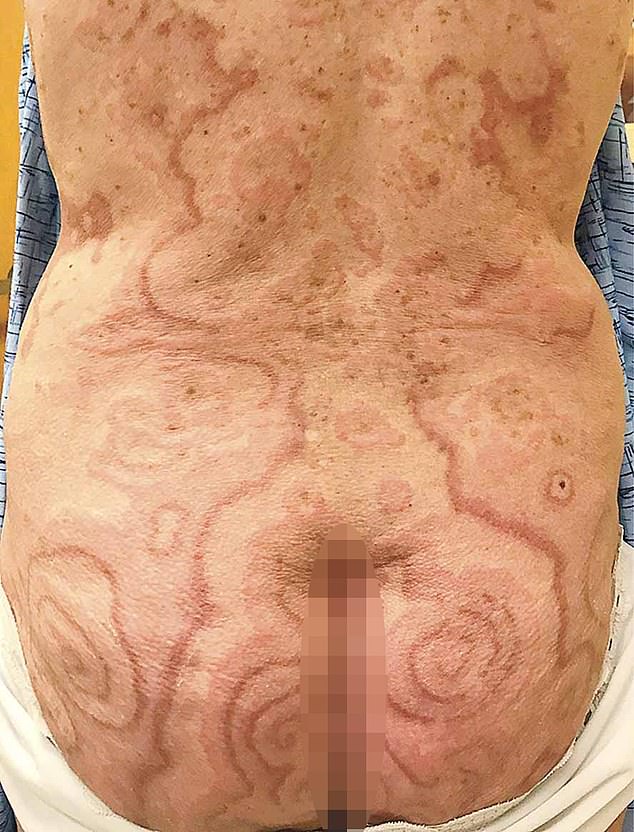 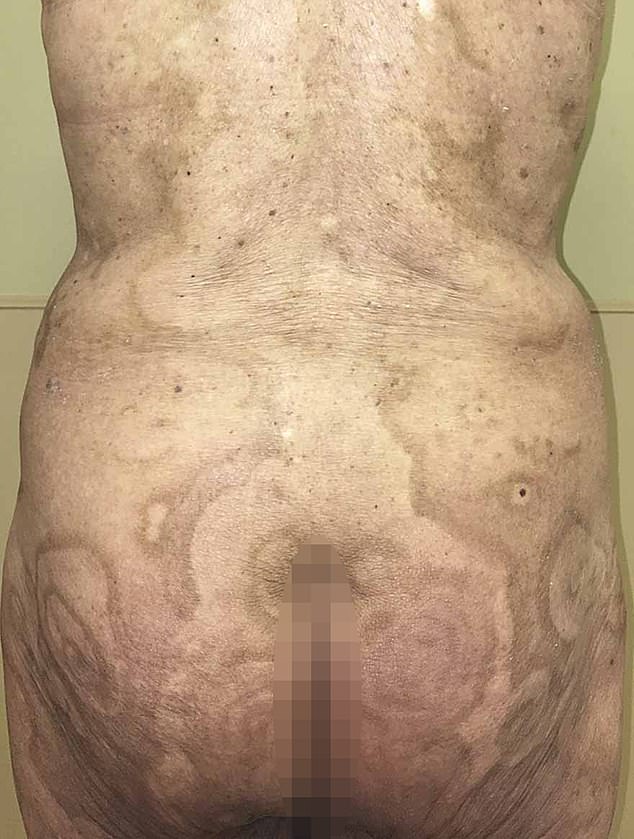 Doctors at the University of Kansas Medican Centre, in Kansas City, told the story in the New England Journal of Medicine.

It isn’t common for a rash to be a sign of cancer, a dermatologist told The Sun, and therefore people shouldn’t be too alarmed.

Dr Walayay Hussain, a spokesman for the British Association of Dermatologists, said: ‘The skin is like the window to the body if you like, so sometimes that can be a sign that something is going on inside the body.

‘If you get a blistering rash affecting the inside of your mouth as well as your hands and feet – and it’s quite severe – then sometimes that can be a sign of what we call a paraneoplastic rash.

‘That basically means it is associated with some form of cancer elsewhere in the body.’

The woman had had the red swirly marks on her thighs, buttocks, stomach and armpits for 11 months.

Dr Megan Prouty, one of the dermatologists involved in the treatment of the woman, said the patient had been initially treated with antihistamines.

But over the next four months, the rash developed into scaly plaques, which could have been a sign of many skin conditions from psoriasis to urticaria.

What concerned doctors the most was that the woman had also been showing symptoms of something more sinister.

Medics performed a colonoscopy on the patient, where a camera was inserted into the intestines.

Dr Prouty said: ‘The patient was referred to the dermatology clinic for assessment of the persistent, evolving rash.

The woman was given radiation and chemotherapy, and within three months, the rash had gone and never returned – but she was left with scarring.

It is not clear how long she needed treatment for, but the report said she was in remission after eight months.

HPV, the name for a group of viruses that affect your skin and the moist membranes lining your body, may never show symptoms and it can take years for cancer to develop. It is unclear if the woman had HPV.

Human papilloma virus (HPV) is the name for a group of viruses that affect your skin and the moist membranes lining your body.

Up to eight out of 10 people will be infected with the virus at some point in their lives.

There are more than 100 types of HPV. Around 30 of which can affect the genital area. Genital HPV infections are common and highly contagious.

Many people never show symptoms, as they can arise years after infection, and the majority of cases go away without treatment.

It can lead to genital warts, and is also known to cause cervical cancer by creating an abnormal tissue growth.

Annually, an average of 38,000 cases of HPV-related cancers are diagnosed in the US, 3,100 cases of cervical cancer in the UK and around 2,000 other cancers in men.

HPV can also cause cancers of the throat, neck, tongue, tonsils, vulva, vagina, penis or anus. It can take years for cancer to develop.