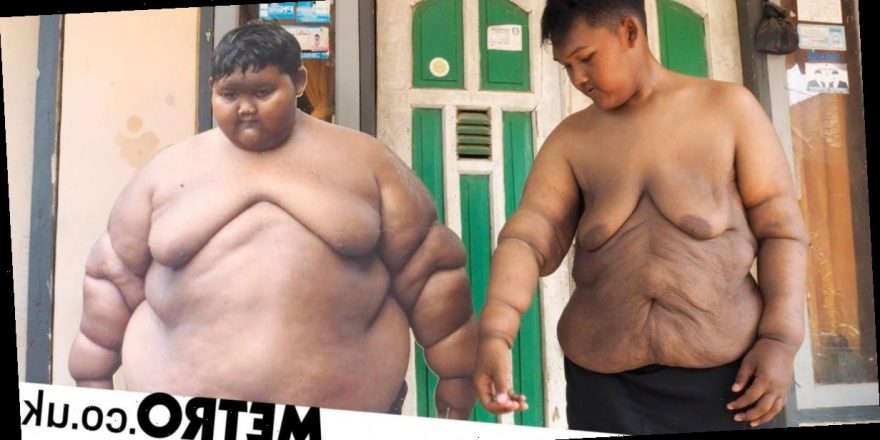 A 14 year old boy who was once known as the heaviest child in the world has undergone surgery to remove a huge amount of saggy skin after losing hundreds of pounds.

Arya Permana, from Karawang, Indonesia, used to weigh 192 kilograms, which is more than 30 stone. But the teenager has started to become much more active and as a result, the weight has been dropping off.

Arya weighed 423 lbs at his heaviest and struggled to do simple activities like walk down the road to school or even take a bath. But the teenager lost an incredible 220 lbs after having weight loss surgery.

But, while the teenager is now able to lead a much more active life, he has been left with lots of excess skin on his chest, stomach, back and arms.

The skin on his arms in particular left Arya feeling embarrassed, and he would try to cover it up with long shirts.

It also meant when he did participate in sports, the excess skin would rub and irritate him.

Arya underwent the first of at least four planned surgeries at the Hasan Sadikin Hospital in Bandung in July 2019, to reduce the excess skin on his arms.

He hopes to return for further skin removal surgeries in the future – although with the COVID-19 pandemic it is not confirmed when he will be able to have the rest of the surgeries.

Hopefully the wait won’t be too long, and Arya can get back to living the life of a healthy, active teenage boy.

Do you have a story to share? We want to hear from you.

Get in touch: [email protected]