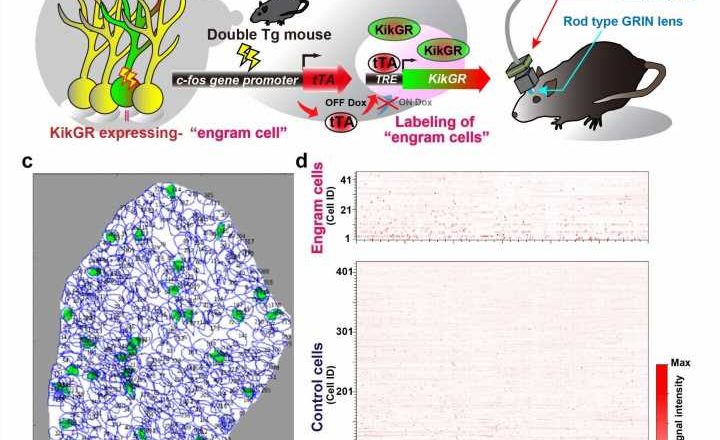 Discovery of neuronal ensemble activities orchestrated to represent one memory 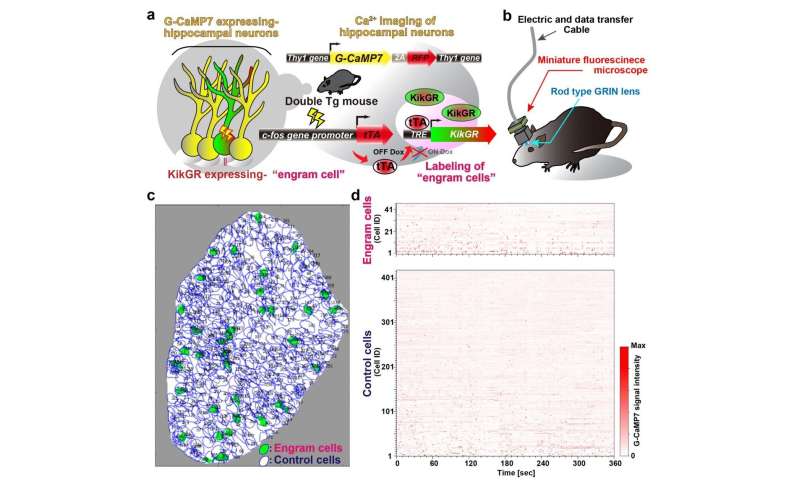 The brain stores memories through a neuronal ensemble, termed engram cells. A unique system was established to transfer neuronal population activity into light with discrimination between engram and non-engram cells using fluorescence proteins. By using this system, it is revealed that engram sub-ensembles represent distinct pieces of information, which are then orchestrated to constitute an entire memory. In addition, some sub-ensembles preferentially reappear during post-learning sleep, and these replayed sub-ensembles are more likely to be reactivated during retrieval.

A Japanese research group supervised by Dr. Noriaki Ohkawa (Lecturer) and Professor Kaoru Inokuchi of the University of Toyama succeeded in establishing a system to investigate characteristic activity of cell ensembles acquiring memory and visualized ways for representation and consolidation of memory experienced novel episodes in the brain.

We are exposed to many episodic events and then memorize their information throughout our life. This kind of memory, episodic memory, is processed in several brain regions, and one of the regions is the hippocampus. It is believed that, in the hippocampus, one specific episodic memory is stored within and retrieved from a neuronal ensemble composed of neurons, termed engram cells, that are activated during learning. Indeed, activation or inhibition of engram cell ensembles induces or inhibits memory retrieval, respectively; thus, engram cell ensembles represent the physiological manifestation of a specific memory trace.

However, one episodic memory is composed of several components of the episode, and each component should be encoded by specific substrates, e.g. engram sub-ensembles. Nevertheless, it had not been clear how activity in these engram cells was assembled to represent the corresponding event because of technical limitations, and these mean that it is difficult to distinguish the population activity of engram cells from that of non-engram cells. 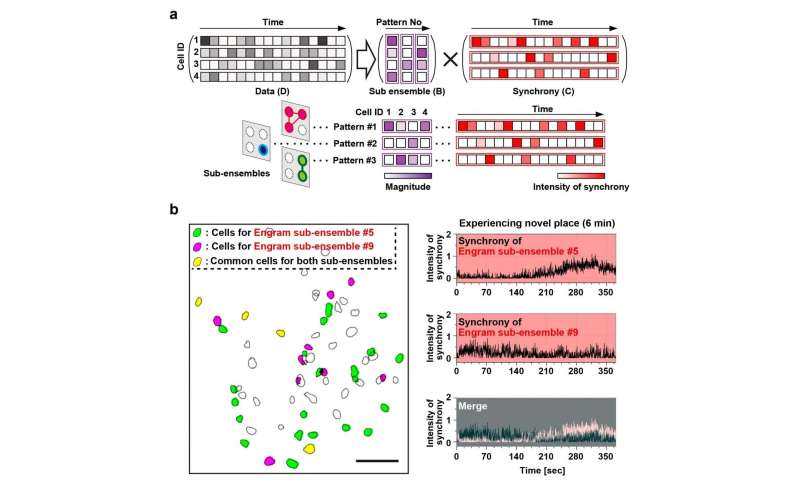 To address how one episodic memory is represented and consolidated in engram cell ensembles, one must visualize the activity of engram and non-engram cells. Engram cells can be specifically targeted in c-fos-tTA mice because the neural activity associated with memory formation induces c-fos gene expression, which in turn induces activity-dependent tTA expression under the control of the c-fos promoter. In the absence of doxycycline, tTA can bind to the tetracycline responsive element (TRE), enabling downstream expression of the TRE-dependent transgene (Figure 1a).

When a neuron activates, Ca2+ flows into their soma. Thy1-G-CaMP7 mice express a Ca2+ indicator, G-CaMP7, in pyramidal neurons of hippocampal CA1 in the mice. Thus, neuronal activity is transferred into G-CaMP7 fluorescence, called Ca2+ imaging. We developed a technique that combines a head-mounted, miniature fluorescent microscope, with Thy1-G-CaMP7/c-fos-tTA double transgenic mice. The hippocampal CA1 region in double transgenic mice was injected with LV expressing a fluorescent protein, Kikume Green Red (KikGR), under the control of TRE (Figure 1a and 1b). Using this approach, engram cells can be identified with KikGR, and the Ca2+ signals corresponding to the activity of engram cells and non-engram cells can be tracked during the experience of a novel episodic event (Figure 1c and 1d).

The data indicated that population activity of engram cell ensembles exhibited the characteristic trait of highly repetitive activity during novel episodic events. To address components of one memory, it was proposed to deconstruct population activity into sub-ensemble groups. Non-negative matrix factorization (NMF) decomposes population activity into a time series of coactivated neuronal ensembles (Fig. 2a). Each sub-ensemble is composed of different cells, which are spatially intermingled (Fig. 2b left), to make their synchronous activity even among the group of engram cells associated with a single event (Fig. 2b right). These results suggest that the total information of one event is structured into sub-engram ensembles. 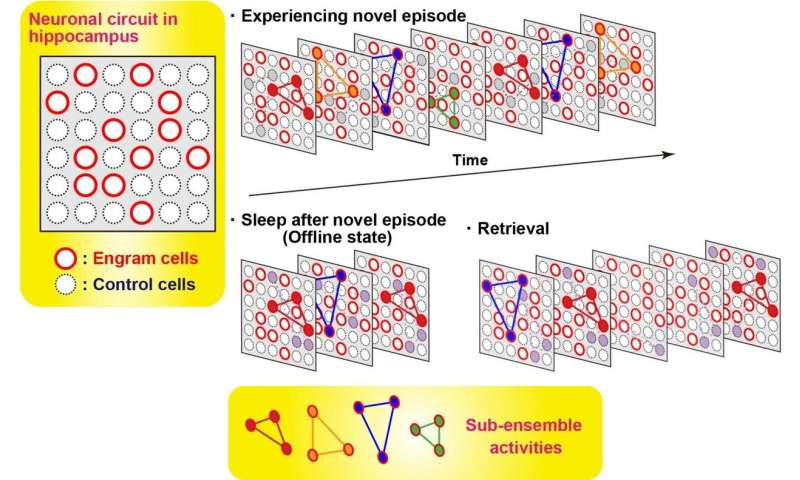